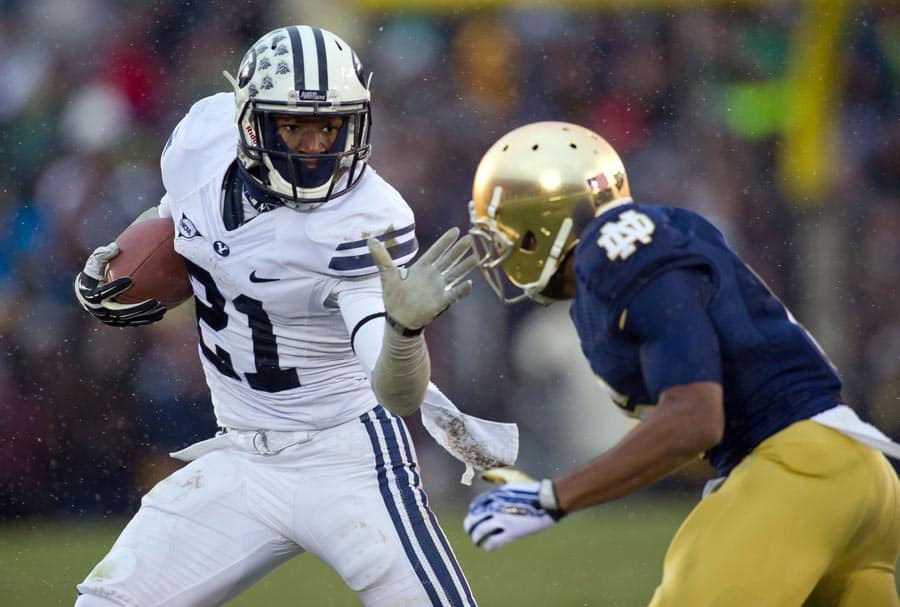 The future football series between the BYU Cougars and the Notre Dame Fighting Irish has been trimmed down to just one game, BYU athletics director Tom Holmoe revealed in January.

Back in 2010, BYU and Notre Dame agreed to a six-game football series. The series was essentially two two-for-one’s that included four games in South Bend and two games in Provo.

However, primarily due to Notre Dame agreeing to play five ACC games per year, the Cougars and Irish have only played two of the six games, and both were in South Bend (2012 and 2013).

At his semi-annual roundtable discussion with reporters, Tom Holmoe stated that the second two-for-one series is “off the table” and that he will be “patient” for the Irish to return the game that is owed. Below is the full text of Holmoe’s statement via The Daily Universe:

“It’s dormant. They made a decision to schedule over our remaining game, and we’ll see how that goes. We have contract protections. Notre Dame is a great university and our fans love that game. So I’ll be a little more patient to see if we can make something of that. I kind of have a cabinet of people that I trust and know. Right now it’s probably worth holding on to for a little bit. We’ll talk about it when it gets a little closer.”

“I would say that the second two-for-one series is off the table. We do definitely need to clear up the first contract. Notre Dame had a schedule agreement with the ACC and it was a great opportunity for them. To think that they joined a conference out of football was a big thing. And so for them to do that changed things and that can happen for us. So I would really be hypocritical to think that I’d hold them to the fire for doing something that’s really good for them. But we’ve played them twice out there, and they need to return this game. But the second series of three games, I understand that.”

Last year, Holmoe touched on the Notre Dame series but indicated the possibility that Notre Dame may never return the game.

“We’re going to work it out one way or another,” Holmoe said. “If they come back to play us (in Provo), that would be great. If they don’t, then there will be some type of settlement and we’ll part as friends.”

The only other scheduling tidbit Holmoe offered was how he will approach future football scheduling moving forward.

Holmoe said he won’t schedule games into 2020’s right now unless it’s a really good game. Said he’s working on one he thinks fans will like.

Notre Dame needs to honor their commitments and return to Provo for one game. Irish fans would enjoy this game far more than the G5 games that are on the schedule.

BYU needs to demand an audit of ND finances.

Yeah that would be like doing an audit on BYU finances. Not going to happen.

Well, wrapping up a yearly series with Idaho and New Mexico State should be no problem now. Throw in Army and UMass, and there’s some of your schedule.
.
The real answer for BYU is XII for football-only and staying WCC for the rest. If the XII would listen to Boren, they’d have BYU and Cincinnati on board already.

Yearly series with Idaho and New Mexico State? All schedules are full through 2017 and then Idaho is likely to drop to FCS in the Big Sky conference–although they would be a candidate for the annual FCS game. I have no idea what New Mexico State is going to do from 2018 on but doubt an “annual” series would be in the works.

BYU is going to want winnable home games against available opponents, and likely not FCS closers to the home schedule, preceding trips to Stanford and USC that will take place to close 14 week seasons. UMass, as part of home and homes, and NMSU as pat of 2 for 1s, seem like good candidates for those home games.

Catholics going back in their promises? I’ve never seen that before.

ND needs to clear of the last game of the two for one series. I’d hope that they’d play in Provo in late October or November. If they decide that they need to buy it out, then so be it. BYU doesn’t need this resolved anytime soon, but it would be nice if ND could would play the game within the next 3 years.

when will Notre Dame move out of the Independent group?

ND will never join a conference for FB. They have the best of two worlds. Everyone wants to play them so they have no issues with scheduling. Also, they don’t have to share their winnings with a league, since they aren’t in one. I don’t look to see them joining a league anytime soon.

Now that the Shamrock Series games are not happening many years, it would seem Notre Dame could just drop the game in Provo into 2018, 2019 or another year and be done with this.