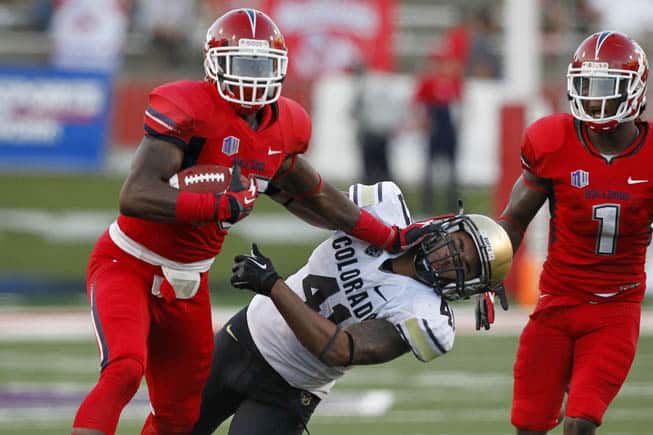 Due to flooding in Boulder, the Fresno State at Colorado football game on Saturday has been postponed, school officials have announced.

“Even though the weather is improving, Boulder is still designated as a national emergency site,” Chancellor Philip P. DiStefano said. “Our community is hurting. Many of our students are displaced from their homes, including many of our student-athletes. This is not an appropriate time for us to hold a game that would put pressure on the community, both in terms of security/emergency personnel, but also in diverting attention from people in need.”

The game was scheduled for a 2 p.m. ET kickoff on the Pac-12 Networks. Fresno State and Colorado will discuss a possible make-up date for the game. However, the two do not share a common open date.

December 7 appears to be the only date that the two schools could make up the game. But that would only happen if neither school qualified for their conference championship game.

“We feel that this decision is the appropriate one in light of the circumstances,” Athletic Director Rick George said. “Many of our students, alumni and fans have been affected by the events of this week and again, this is the right decision to make in light of those.”

“Our players have a strong desire to compete, but many of them and many of their friends have personally been affected and I know they support this decision to postpone as well,” said CU head football coach Mike Macintyre. “This is the appropriate decision and we are all 100 percent in agreement.”

Actually best would be to shift UNLV to November 16th, which both teams have open. Then move Colorado to October 19th date. Neither school I see wanting to play after championship games, besides bowl games.

Seems like a lot of work and expense for a non conference game. My guess is that they just let it go.

As always, hope everyone stays safe.

Our thoughts and prayers go out to everyone in Boulder, and throughout all of Colorado, as they are going through such difficult times, like these. Lord, help them. Thank you.

Wow Tom Stein— How nice of you to sit on your butt in another part of the country and pretend you actually did something because you talked to some imaginary being in the sky.

If you want to help, why not send a check to the Red Cross or some other relief agency.

What the hell?! Just because you are on the Internet, doesn’t give you the right to bring others down just because you want to make yourself feel better. Get a life, you self-centered jerk. Just some advice, stay off the Internet and get a frickin life!

Agreed connEr…..maybe Bill here can show us his donation receipt to the Red Cross of HIS own donation. What a asswipe.

Sorry the suggestion that people get off their ass and write a check brings you down. connEr.

Given a choice, yeah, material aid probably would be preferred to prayers. Is that all that controversial? I mean the imaginary being in the sky did already allow the flooding, no? Anyway, I hope any cancellation does not derail Fresno Stat’s B.C.S. chances.

the buffs are hideous

Some reports are hinting towards the Buffs dumping Fresno State altogether. If that’s true, the only option left for Fresno State to schedule another team to get a full schedule of 12 teams would be to schedule Army on November 16th (most likely it would have to be at Army since they’d be doing Fresno State a huge favor by playing a 13th game – Army plays at Hawaii and would be allowed to have the Hawaii exemption).