Are Florida and Texas Discussing a Future Football Series? 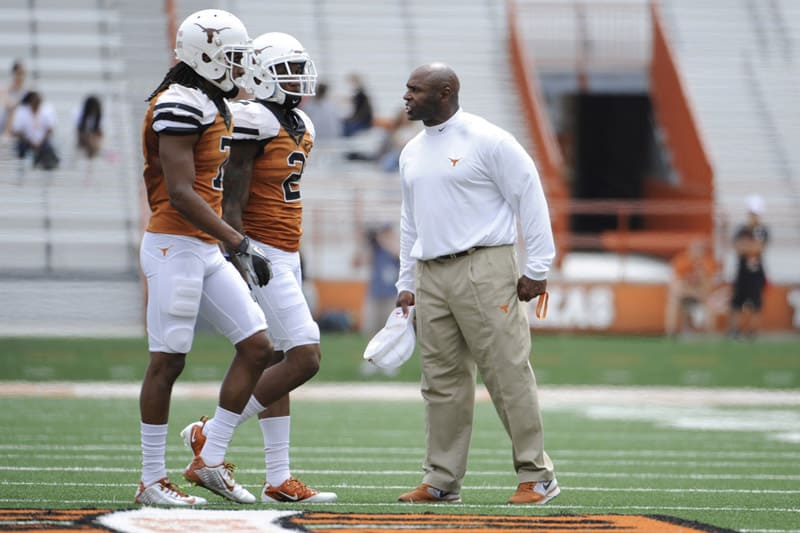 Charlie Strong is in his first season at UT. (Brendan Maloney-USA TODAY Sports)

The Florida Gators and the Texas Longhorns haven’t met on the gridiron since a 1940 contest in Gainesville. Prior to that, the two met in Austin in 1939 and 1924.

Could the two schools possibly meet in the future in a home-and-home series? Maybe. But then again, maybe not.

Yesterday, the Southern SportsTonight Radio show tweeted that Florida and Texas were “in talks” for a future series.

Not true MT @SSTRadio: sources inside UF athletic dept. are telling us they are in talks with Texas for home-&-home football series

This morning, the SST Radio Show followed up with another tweet that sort of backed off their initial tweet, but still claiming talks between the schools.

Although Florida “officially” said they aren’t talking with Texas, you have to hope that they quietly are or will at some point. A Florida-Texas regular-season matchup would be a dandy.

Furthermore, a home-and-home series could see the Florida Gators travel outside the state for a non-conference road game for the first time since playing at Syracuse in 1992.

There’s also the obvious coaching staff connections between the two schools. Florida head coach Will Muschamp used to be the defensive coordinator at Texas, while UT head coach Charlie Strong held several positions with the Gators.

If the two schools do meet, it would likely be in 2018 or later. Florida’s non-conference schedule is wide open after 2017. Texas currently has one opening in 2018 and two openings in the 2019 through 2023 seasons.

Not possible…that means Florida would actually have to leave the state for a non-conference game!

That would be nice to see, two heavy weights going at it! Florida will be in Texas 2017 to play Michigan, if these two teams get together it may be a neutral site game also.

Well if Texan were to schedule this series I think this would cause Art Briles to schedule more games with Incarnate Word.

LOL. Did anyone actually think UF would leave the state to play an OOC game. Second is Texas OOC is already set with 1 major conf OOc yearly thru 2023 and they have 4 years 2015 thru 2018 where they have 2 major conf OOC games

Florida is already scheduled to play Michigan in Dallas in 2017.

Yeah, but that’s neutral. Home and Home is a totally different ball game

Nore Dame wants to move their 2019 & 2020 games. So it is quite possible Texas is attempting to schedule Florida for those seasons, for neutral sites?

Indeed the Gators already play the Florida State every season, so why then would Florida want to add another upper tier power 5 conference program (Texas) to their OOC schedule?

Whereas the Seminoles are on average scheduling two upper tier P5 OOC programs every year (2014 – Florida / ND / Okla St (Arl)). In 2016 and 2018 besides the Fla St-Fla game, Florida State may play Georgia in neutral site games, The ACC agreement with Notre Dame will help Florida States OOC SOS every third season or so.

It was previously reported Florida has elected to no longer schedule FCS programs to their 4-game OOC schedule. So Florida is focusing on increasing their OOC SOS as well.

Florida is trying to keep up with their neighboring rivals.

I’d doubt that Texas would be trying to schedule a neutral site game. I know there was all the talk about the new AD, Patterson, showing interest in international games (like Mexico City) and while those things may still happen, the reaction he received from fans wasn’t great. Fans want to play big teams in their home stadium and travel to the other team’s stadium. I know we’re playing a neutral site game with UCLA this year, but that’s the exception to the rule for the most part and ended up coming about because Arkansas asked to further postpone the second game of the series with them. Texas will still probably consider the neutral-site situation, but we already play one neutral site game every year.

I know Florida hasn’t done so lately, but I’m not sure I understand why they wouldn’t do what other schools do and play an away game against someone on the years they play a home game with FSU and play a home game the years that they play FSU in Tallahassee. I mean, they’ve done that with Miami (kind of sort of), right? And FSU does it. And I’m not sure how that’s any better or worse than playing Michigan in Dallas for one year.

Hope it happens. Would love to see it either coupled with the Notre Dame series in 2019-2020 or, if that series indeed gets postponed as ND seems to want, maybe as a replacement until ND decides they can keep their obligation. It might be a bit of a tall order to hope for both ND and Florida in the same season, but regardless I hope Texas’ pattern of scheduling 2 power-5 opponents continues (even if one of them needs to be someone a bit more… second tier…?).

A recruiting home run for the team that wins that series.