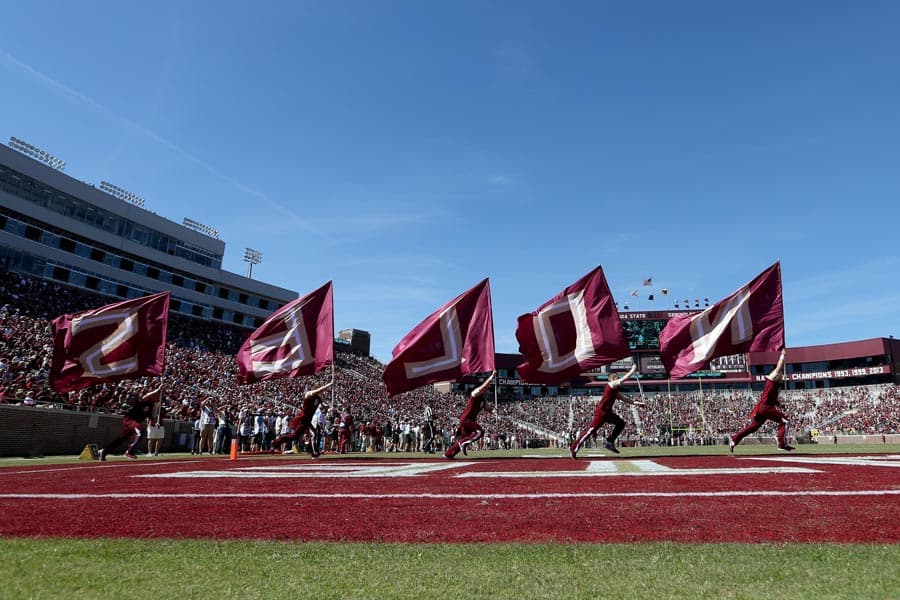 The Florida State Seminoles have added the Charleston Southern Buccaneers to their 2016 football schedule, Noles247 has reported.

Florida State will host Charleston Southern at Doak Campbell Stadium in Tallahassee on Sept. 10, 2016. The Buccaneers will receive a $475,000 guarantee for the game.

The Seminoles open the 2016 season at Citrus Bowl Stadium in Orlando against the Ole Miss Rebels. That game is set for Monday, Sept. 5 (Labor Day).

Two weeks after playing host to Charleston Southern, the Seminoles travel to Tampa to take on the USF Bulls (Sept. 24). That game is the second of a home-and-home series that began in Tallahassee this season.

FSU wraps up the 2016 regular season at home against the in-state rival Florida Gators on Nov. 26.

Don’t care what anyone from the SEC says, this is how you schedule an FCS opponent. 2 Power 5 teams, 1 real away game, and a lot of happiness from viewers.

Only the SEC refuses to schedule a real OOC schedule. Even Alabama has a joke of a 2016 schedule outside of their 1 great OOC “neutral” site game in Texas against the USC Trojans.

Meanwhile FSU plays 2 Power 5s and a strong AAC team on the road.

SEC is a joke.

Wow, for the SEC to be a joke, you guys sure do talk about them a lot, like consistently!

Day,
Why do you think that is? I’ll give you a hint: it’s not jealousy.

It’s because the SEC bends the rules to get overinflated records every single year. 8 conference games. Maybe 1 Power 5 team. 2 low level FBS teams (C-USA or Sunbelt) and an FCS team. EVERY. SINGLE. YEAR.

Now, if you took one of those low level FBS teams and turned it into either: 1) a conference games (making it 9 total), or 2) another Power 5 team…. then we would give you credit. However, you don’t, so we will continue to complain, scream SEC bias, and complain, until your conference addresses it.

The fact that even Nick Saban stated that he thinks the SEC should cancel FCS games and play 9 conference games should make you SEC fans open your eyes. Saban even admitted that playing 9 conference games as opposed to 8 was much harder and would make it more difficult for some teams to advance to the CFP. Yet, the rest of your conference are cowards. So, Nicky boy schedules his team to deal with the rest of the SEC… I will only even defend Alabama as a good football team in this conference. Every other team is a joke. A JOKE. Alabama >>>>> SEC. The rest of the SEC should propose to Alabama and thank them for making that conference. Period.

I know what Magic Nick said, not sure if he has enough swagger to get it done though, that’s why I don’t complain much about things I have no control of. I think calling a whole conference A JOKE or OVERRATED is a bit extreme but that’s your opinion & with that I will respect it, sad, but I will respect it.

Seriously, ever single team in D-1 uses men’s bball and football to pay for women’s sports as well as most other men’s sports. Your argument is moot, you fool.

Scheduling across all P5 conferences should be made uniform

1)All conferences go to 9 game schedule..that’s you SEC and ACC which stupidly play a 6-1-1 format with 14 teams. That makes you play 6 teams in your conf just twice in 12 years.

4)Every school must schedule at least 1 an actual P5 OOC. If you fail to do so you’re automatically not eligible for the playoff that year. The bottom schools annually can bail but won’t be rewarded if they happen to be better than their AD thought, thus why they don;t schedule P5’s OOC

Wasn’t there a Power 5 Div I opponent available?

Not one who would sign a 1-year contract without expecting a home game in return.

common sense, you are a joke

the acc right along with you is the joke

Gotta love all you know it alls. Let’s be honest here, none of you even played football at a D1 level. You guys couldn’t

Should’ve scheduled Georgia Southern. Oh wait, the Eagles would beat the Nokes just like they did the Gators.