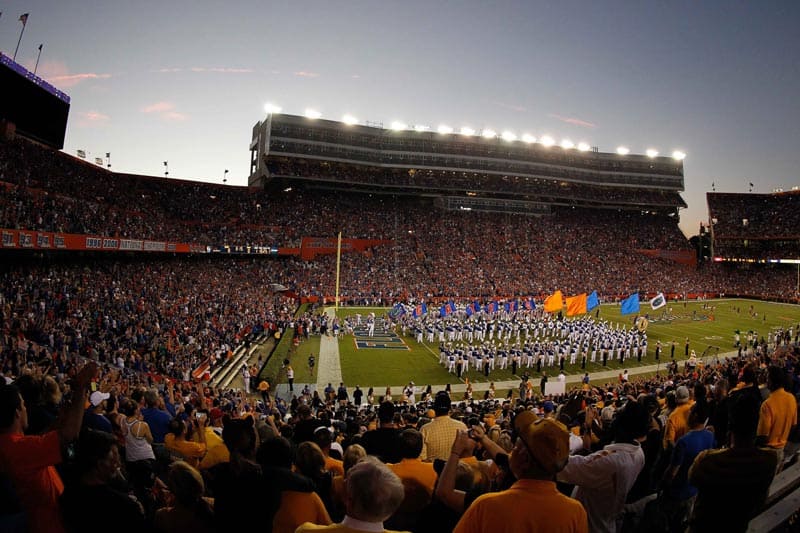 The Florida Gators will play the Colorado State Rams once between the 2017 and 2020 season, UF officially announced today.

The game is part of the buyout contract for new UF head football coach Jim McElwain, who comes to the Gators after three seasons as the head coach at Colorado State.

Yes, you read that right. Florida will pay Colorado State a $2 million guarantee for a future football game at Ben Hill Griffin Stadium in Gainesville. That is likely the most ever paid for a non-conference football game, although the agreement is tied to McElwain’s buyout.

Florida currently has only two non-conference games scheduled between 2017 and 2020, and both are in 2017. The Gators open the 2017 season against Michigan in Arlington, Texas and also host Idaho.

Colorado State also plays an annual rival — Colorado. The 2017-19 games are set for Denver, while the 2020 contest will be played in Boulder.

CSU didn’t even get a home game out of this. Yikes.

There is no chance Florida would ever leave the state for a an away OOC game. They haven’t in 25 years and zero chance to play a mid major.

home game 2 millions dollars hey wake up when have yall ever got 2 million dollars to play one football game its money its talks,,,,,,,,,,, the swamp is a nice place to play when its hot dont forget to bring the fans. gators

Colorado State should have held out for a $1M game payout, for a late November game to be played in Ft. Collins. Dem dere Swampa-a-billies would have loved the Front Range in the Fall.

You’re delusional if you think Florida would ever play an away OOC vs a mid major. They haven’t played an away OOC out of state in 25+ years not even vs P5’s

Yeah Florida more or less showed they would rather pay 7 mil and play in Gainsville than pay 3 mil or less and play a game in Fort Collins. I’m not sure that makes fiscal sense, but it does reek of pride.

No funds available to pay the guys the play the game though, right?

Amen to that,Stuart….Caragher needs to go….

McElwain knows if he comes to Fort Collins to play in this high altitude his gators would lose. Florida’s afraid. That’s why in 25 years they haven’t played a OOC. It’s not arrogant pride. It’s fear. Plain and simple.

It’s not fear. This was part of the payoff to CSU for MacElwain’s buyout. But the altitude could certainly be an issue if the Gators didn’t have much depth. But they do, so again, no fear…

Did you catch the date this article was written?