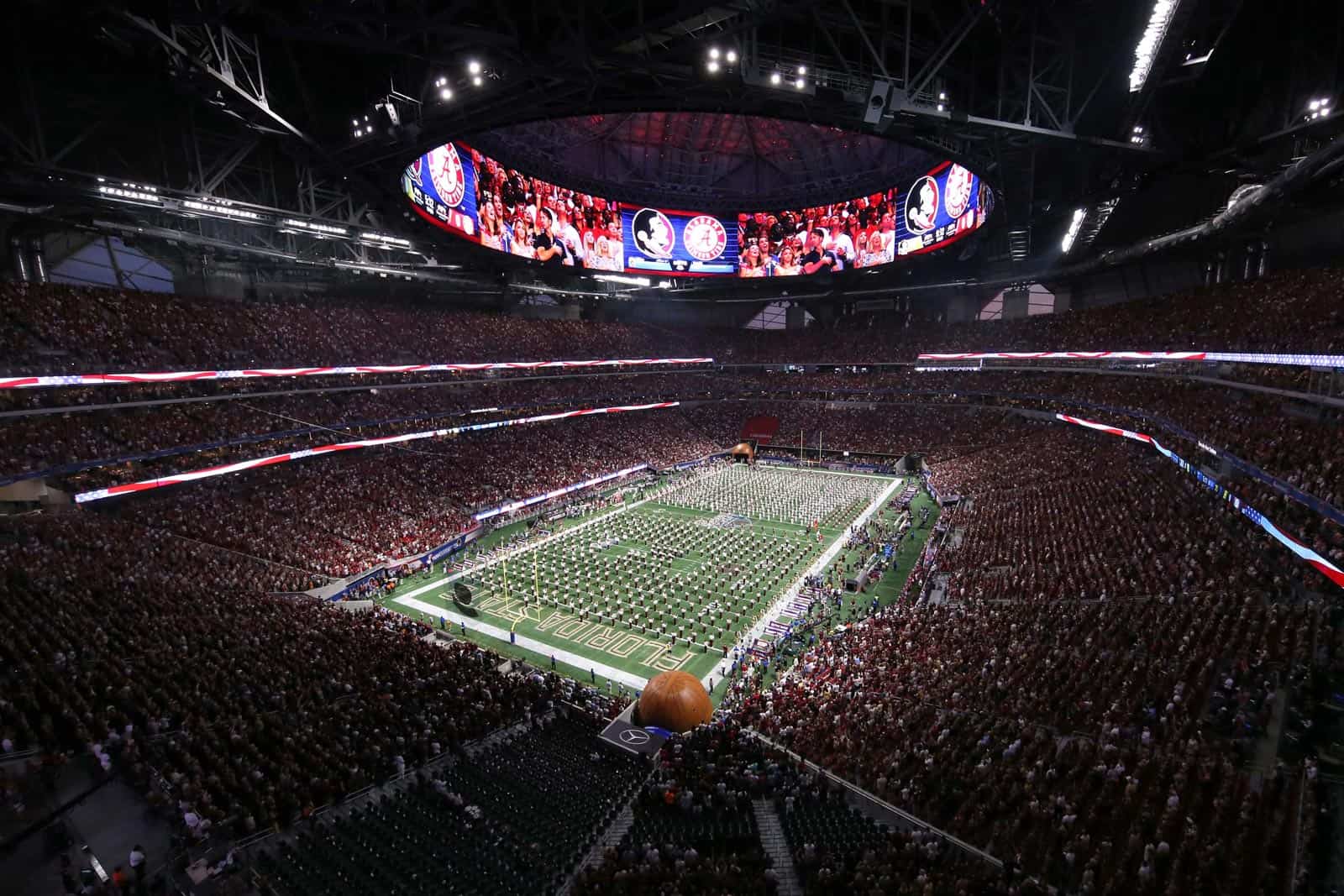 Five Georgia Tech football games will be played at Mercedes-Benz Stadium in Atlanta, Georgia, the school announced on Tuesday.

News of Georgia Tech Yellow Jacket home games moving to Mercedes-Bez Stadium was first reported by the AJC on Monday, but specific matchups were not known at the time.

Georgia Tech will play one game at Mercedes-Benz Stadium each season from 2020 through 2024, beginning with a contest against the Notre Dame Fighting Irish on Nov. 14, 2020.

The Yellow Jackets will host the Fighting Irish again at Mercedes-Benz Stadium on Oct. 19, 2024.

Below is the complete list of Georgia Tech games at Mercedes-Benz Stadium:

Mercedes-Benz Stadium is the home of the NFL’s Atlanta Falcons and Atlanta United of Major League Soccer (MLS). The stadium has a seating capacity of 71,000 and is expandable to 75,000.

The stadium hosted the National Championship Game between Alabama and Georgia in 2018 and was the site of Super Bowl LIII between the New England Patriots and the Los Angeles Rams.

“I’m excited for Georgia Tech, our student-athletes and our fans to have the opportunity to showcase our football program annually in one of the most recognizable and state-of-the-art facilities in the world, Mercedes-Benz Stadium,” said Todd Stansbury, Georgia Tech director of athletics. “An annual series at Mercedes-Benz Stadium helps us meet several objectives for the future of our program, including further establishing ourselves as a premier brand in the Atlanta sports culture, giving our student-athletes the opportunity to perform in one of the NFL’s top stadiums and providing our fans with an ultra-modern gameday experience. I’m grateful to extend the outstanding partnerships that we enjoy with AMB Sports & Entertainment, the Atlanta Falcons and the Chick-fil-A Kickoff Game and look forward to bringing the great tradition of Georgia Tech football to Mercedes-Benz Stadium.”

“Capping off opening weekend with a rivalry like this will put an exclamation point on the start of the season,” said Gary Stokan, CEO and President – Peach Bowl, Inc. “There’s a lot of excitement around the Georgia Tech program right now. A big-time game with a top-ranked team like Clemson and the backdrop of the Chick-fil-A Kickoff Game will be the highlight of the weekend.”

Clearly a status that neutral site games are alive & well, this is interesting to me. I would assume the other two games will be big teams as well.

A game vs. Clemson is one of the Chick-fil-A Kickoff Games? I sure didn’t expect that.

I guess it’s an indication of my getting older, but boy am I disappointed we won’t get to see the Fighting Irish at Bobby Dodd Stadium…those dates had been on my calendar for a while.

I believe these are likely to be home games in name only…at least 50% of MBS will be filled with Clemson, Notre Dame, and TBD fans…and depending on the success of the new Collins regime, it could be much greater than that.

The kick-off game against Tennessee in MBS was the largest neutral site GT crowd I’d seen since the 1/1/99 Gator Bowl v. Notre Dame, hopefully GT fans will again be up for the challenge.