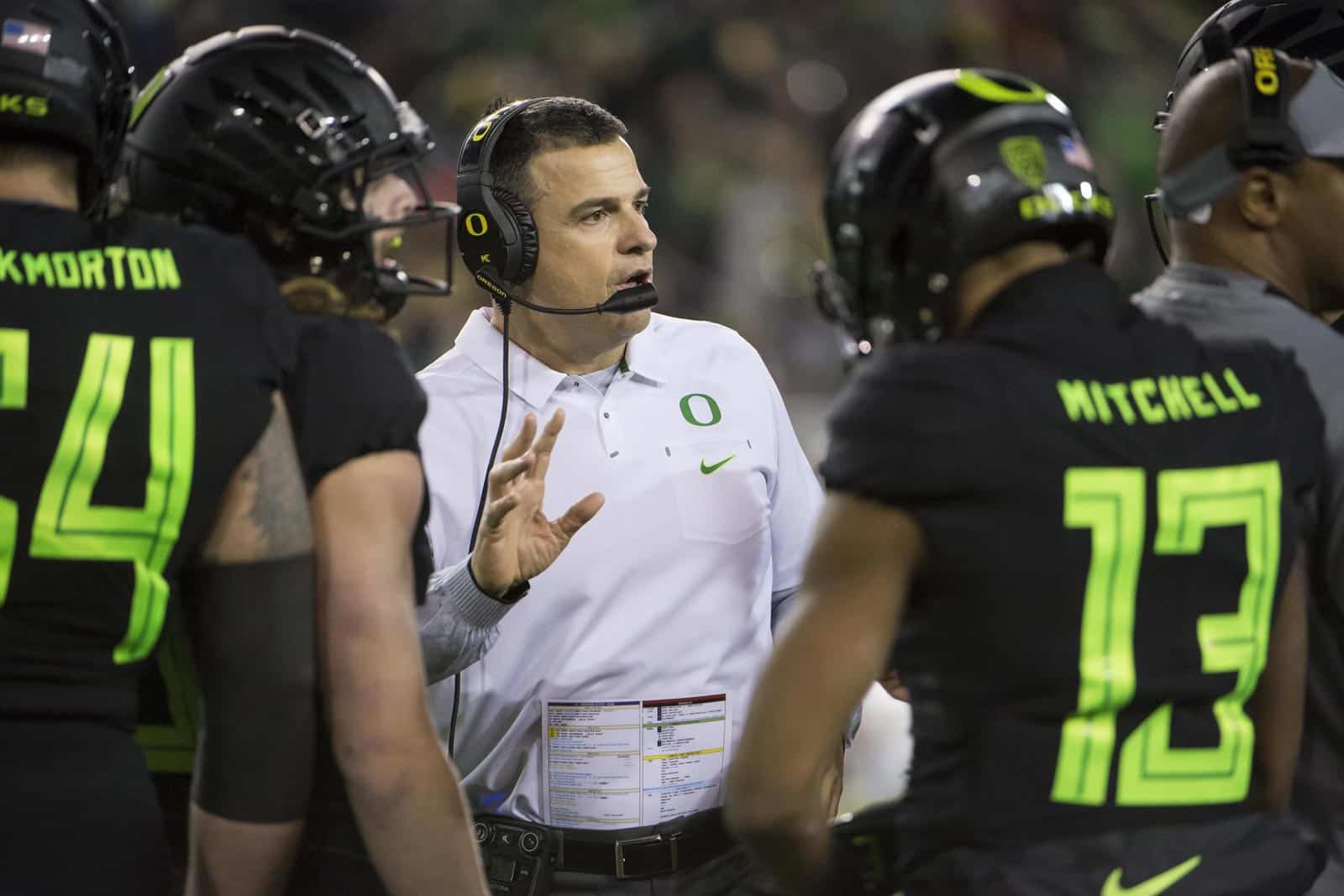 While there is no logical way to achieve true equality in college football scheduling, is the issuing of bold requirements – that aren’t enforced – moving us further away from fairness?

Think about it this way, when – if ever – does a conversation about “strength of schedule” result in any concrete consequences?

The truth is, the only potential hazard to under-scheduling occurs at the end of the regular season – when a program has a legitimate case to have its resume compared with other undefeated or one-loss teams vying for a coveted Playoff slot.

Even if the CFP committee follows through with its promise to consider schedule strength, its decision only affects the top 12 teams in the nation – the programs that qualify to participate in the New Year’s Six (which includes the two playoff games).

That’s only 12 out of the 130 FBS teams (or 9% of the field) that are held to a scheduling standard with teeth – or real consequences.

To illustrate, consider the following scenarios.

(a). Washington State hasn’t scheduled a regular season non-conference Power opponent since 2015. That didn’t stop the Cougars from falling one-loss short of winning last season’s Pac-12 North division and playing Utah for the conference championship. WSU finished tied with Washington, both holding 7-2 records in Pac-12 play. If not for the Cougars’ 28-15 loss the Huskies in the regular-season finale they would have advanced.

The Cougars also don’t have a Power opponent scheduled outside of Pac-12 play in 2019.

(b). Minnesota finished the 2018 regular season 6-6, earning it bowl eligibility for the first time since 2016. Included in the tally was a perfect 3-0 mark in non-conference play: New Mexico State (48-10), Fresno State (21-14), and Miami Ohio (26-3). While the Big Ten technically considers Fresno State a Power opponent (yes, I just said that), issuing a special dispensation in 2016, compare Minnesota’s slate with Purdue’s.

The Boilermakers also went 6-6, only they faced Missouri, (23) Boston College, and Eastern Michigan out of Big Ten play. They went 1-2 in those games and 5-4 in conference action vs. the Gophers’ 3-0 mark in non-league play and a 3-6 record vs. the Big Ten.

Regardless of the disparity, the outcome was the same – the “reward” was equal – Minnesota to the Quick Lane Bowl and Purdue to Music City Bowl.

(c). Oregon enjoyed its best finish since 2015 under new head coach Mario Cristobal, posting a 9-4 record which included climbing as high as No. 12 in the AP and scoring its first bowl win over a Power foe since 2014. Compare that to UCLA, which went 3-9 under new head man Chip Kelly, the fewest wins in program history since 1989.

It’s a six-win gap – making it seem as if the Ducks are on the right path under Cristobal while the Bruins are a train-wreck under Kelly.

While it certainly doesn’t explain away the entire scenario – look at each squad’s non-conference schedule and see if you can’t find a reason for at least half of the difference in wins.

Where Oregon played two FBS teams that combined for a 4-20 record in 2018, UCLA played the Big 12 champion, the Mountain West champion, and a Cincinnati team that went 11-2. Combined the trio went 35-6 and all finished in the final AP Top 25.

The message is clear: schedule whomever you would like, regardless of any “strength of schedule commitment” nonsense and you can ascend all the way to, and win, the conference championship.

For 2019, the potential inequality gets ramped up to the next level – when one of the top teams in the country will have an opportunity to test the outer limits of the “we’re not serious about scheduling standards” discussion.

Indeed, next season Ohio State finds its name listed among the eight teams not playing a Power opponent outside of non-conference action. The Buckeyes get FAU, Cincinnati, and Miami Ohio in 2019. As a disclaimer, the Bearcats are, like Fresno State, one of the Group of Five programs the Big Ten cherry-picked as “Power” foes.

While it’s illogical to think that a perfect, or one-loss, Ohio State would get a nod from the committee over a Clemson (Texas A&M, Charlotte, FCS Wofford, and at South Carolina), Alabama (Duke, New Mexico State, Southern Miss, and FCS Western Carolina), Georgia (Notre Dame, FCS Murray State, Arkansas State, and at Georgia Tech) or Oklahoma (Houston, FCS South Dakota, and UCLA) with the same record – it could reasonably jump a less-desirable name like Stanford (Northwestern, at UCF, Notre Dame) or Iowa State (Iowa, ULM, FCS Northern Iowa).

Also included on the naughty list is fellow Big Ten-member Wisconsin, which should be among the favorites to win the Big Ten-West, and therefore contenders to win a conference crown. The Badgers have non-league games at USF, vs. Central Michigan and vs. Kent State in 2019.

The issue is straightforward – how can a team be eligible to win a league title (and therefore represent it at the next level) if it refuses to follow that leagues’ scheduling dictates?

The gross inequality in scheduling will continue to exist, and damage the integrity of the game, until conferences – especially the Power leagues – standardize requirements and then hold their members accountable.

The piece is about SCHEDULING MANDATES, not nine-game conference schedules.

I do not agree with the Big 10’s criteria for which schools can be passed off as a “P5 game” and wish they would do something like a B10-P12 challenge as they were going to do before the Maryland and Rutgers expansion, but what is the SEC mandate? Why is that not mentioned? This is just another incredibly biased article that brushes off the issues of the SEC and ACC scheduling of only 8 conference opponents while trying to knock the other 3 down, even though this is obviously targeted at the Pac 12 and Big 10 with very little mention of the round robin Big XII.

You seemed to forget about Florida’s two games against FCS opponents last year. They’re playing two FCS opponents again this year. Also, congrats on trying to keep the Alabama hype train going. You’re really trying to equate their out of conference schedule with Clemson’s and Georgia’s???

Amy’s article is about SCHEDULING MANDATES, not FCS opponents. Also, Alabama is barely even mentioned.

I really don’t think people read these articles for what they are worth, they just read them & pick out the WHAT NOTS!
If they can complain about 8-9 game conference schedule or pick on Bama, even if Bama was not mentioned in the article some num-nut would have to bring them up anyways.
I have noticed that Amy’s articles gets the most responses, keep up the good work Amy!

Kevin – The Pac-12 has never mandated that its teams play at least one Power-5 opponent out of conference but they are used twice in this article. I do highly agree with Amy’s last paragraph with all conferences agreeing to the same scheduling requirements, then all teams in the Power 5 will have a much more difficult time gaming the system.

Day – First, Bama’s schedule was compared to other difficult schedules like Clemson and Georgia. And second, Bama’s out of conference schedule, along with Oklahoma, are both weak compared to Clemson’s and Georgia’s. Even you can admit that.

I never would brag about Penn State’s out of conference schedule. They play one power 5 team and two lower teams each year, not two FCS teams in two consecutive years. Florida’s going to be playing ten power five teams this year, something Penn State will be doing for ten straight years. They’ll also be traveling to VA Tech, Auburn, and Morgantown for away games, something Florida hasn’t done outside of their state since 1991 (neutral site games are not away games).

Both the Big Ten and the Pac 12 play 9 conference games, but the ACC and SEC only play 8. your examples are for those conferences and then comparing them to the others which isn’t the same. WI and OSU playing and extra “Power” team in their conference should count for something.

I don’t think Rutgers from the BIG or Oregon St from the Pac-12 should count for anything, they are just that BAD!
Meanwhile this article was not focusing on inter conference teams.

Day – Should wins against a two win Arkansas count for anything? Probably not since Rutgers swept their home and home series they had not too long ago.

Rutgers swept Arkansas 7 YEARS AGO while they were in the The EAST & actually relevant.

Each conference has their doormats, but if the institutions agreed to the scheduling rule and then don’t follow it (ie Wisconsin in 2019) then there should be a penalty

Day – Rutgers is terrible right now but has potential. No reason to bash them to justify an eight game schedule being equal to a nine game schedule. They just need the cash to fire Ash and hire an up and coming offensive head coach with energy similar to Brohm.

No reason to justify Rutgers as having potential to make them seem like a legit P5 team, they have not been relevant since they entered the BIG & there are better FCS & G5 schools that play harder then them.

Day – Rutgers has hurt themselves with two bad head coaching hires. The B1G has been paying them $8-9 million while the rest of the teams other than Maryland have been getting the full $30-$50 million. They should be terrible under those circumstances. Not every team can be Missouri and enter a conference and mop up their division two years in a row.

TCU came into the BIG-12 & dominated that conference as well, did you forget that or just want to bash the SEC on being weak in the East Division 7 years ago.

Washington State played Boise State in 2016 and 2017. Boise should “count”

Exactly..teams like Boise, UCF, Houston and a few others are better than many of the teams in the ACC and B10

Has the Big 10 determined that the MAC is a power conference yet?

Uh, you do realize that both Fresno St. and Cincy finished ranked in the top 25 and are better than most P5 schools, right?

Also, if OOC scheduling matters so much for the playoffs, please explain why the playoff committee picked OU over OSU in 2018. Both had one loss. OSU played 2 P5 opponents OOC (and one of them, TCU, was respectable) while OU’s only P5 opponent was a weak 3-9 UCLA team.

The SEC also (recently) put a mandate on their teams to play at least 1 out of conference opponent from a power 5 conference. However, not everyone has followed it.

Arkansas got a special exemption from the league to count Colorado State as that power 5 opponent simply because Arkansas “couldn’t find another power 5 opponent to play them” in 2018 and 2019.
https://www.google.com/amp/s/fbschedules.com/arkansas-colorado-state-2018-2019-power-five-games/amp/

Please explain how Colorado State is different than Fresno State (mentioned in the article about Minnesota).

Wouldn’t a conference schedule be a mandate in it’s own account? So when the Pac-12, Big Ten, and Big 12 require their members to play 9 conference games, that in itself is a mandate, especially because it forces teams to have 5 conference road games every other year.

Thank you for writing this article. The way the conferences enforce the “mandate” means is not a mandate at all. I am not even sure the committee really care about out of conference schedule. We have a great example with Ohio State this year who does not play a Power 5 team out of conference, although they have in previous years. Lets see if the Committee even says anything.

On one hand, Florida doesn’t play a hard schedule because they play only 8 conference games in the toughest conference in the nation.and one out of conference game against a Power 5 opponent.

But then people say Boise, UCF and others should count because they are “better than some teams in the Power 5,” completely ignoring the fact that they don’t even come close to playing 9 Power 5 teams.