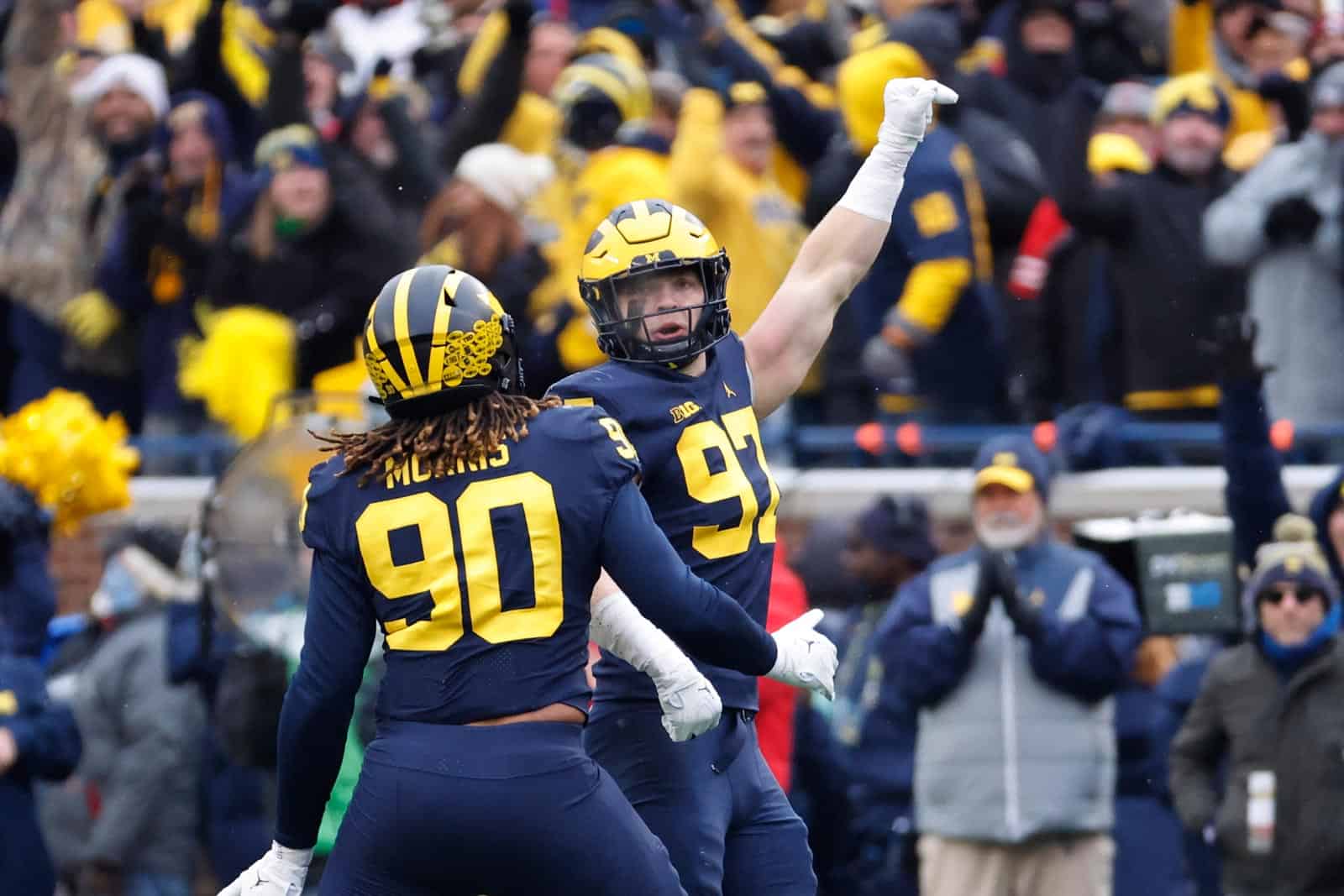 The penultimate College Football Playoff Rankings for the 2021 season have been released by the selection committee, which features changes in the top four.

The Georgia Bulldogs (12-0) remain the top-ranked team, while the Michigan Wolverines (11-1) vaulted to No. 2 following their 42-27 win over the Ohio State Buckeyes (10-2). The Alabama Crimson Tide (11-1) remain in third and they are followed by the undefeated Cincinnati Bearcats (12-0) in fourth.

Fourth-ranked Cincinnati remains the highest ranked team from a Group of Five conference. The BYU Cougars, a Football Bowl Subdivision (FBS) Independent, are the next highest non-power team at No. 12.

Wisconsin (14) and UTSA (22) each fell out of the College Football Playoff Rankings following losses on Saturday.

Check out the full CFP Top 25 rankings below:

The College Football Playoff Selection Committee will release their final rankings of the season on Sunday, Dec. 5, which is Selection Day.

On Sunday, Dec. 5 at Noon ET, the College Football Playoff Selection Committee will announce the Playoff Semifinal pairings and semifinal bowl assignments. Those will be followed by the pairings for the remainder of the New Year’s Six bowl games.

If Alabama wins, do they go to #2 or #1? The CFP would prefer to avoid a rematch of Alabama and Georgia in the semi-final game. Alabama will have beaten #1 Georgia and the week before Michigan defeated #2 Ohio State and likely beat #13 Iowa in the B1G title game. I’m curious to see how that scenario would play out.

One thing being overlooked: If Oklahoma State wins over Baylor and Alabama wins, the Cowboys may leapfrog Cincinnati and be ranked #4 even if the Bearcats win.

If Georgia wins and Cincinnati wins, the Bearcats should still be #4, even if Oklahoma State wins over Baylor. Alabama should be out with two losses and having Mercer, Southern Miss and New Mexico State on their schedule this year doesn’t help their case in getting into the CFP.

IF Alabama beats Georgia, Oklahoma State beats Baylor and Michigan beats Iowa, the four playoff teams will be: Alabama, Georgia, Michigan and Oklahoma State. In point of fact, if this sequence of outcomes occurs, Cincinnati is not going to the playoffs.

IF Alabama beats Georgia, Oklahoma State beats Baylor and Michigan beats Iowa, the four playoff teams will be: Alabama, Georgia, Michigan and Oklahoma State. In point of fact, if this sequence of outcomes occurs, Cincinnati is not going to the playoffs.

The trick for Cincinnati is to beat Houston bad enough that the Bearcats look like a great team, but not bad enough so that #21 Houston gets dumped out of the Committee’s Top 25.

Just kidding the final ranking will nothing to do with how well the Bearcats win.

They are not in a power conference which affects where they play in a bowl game.