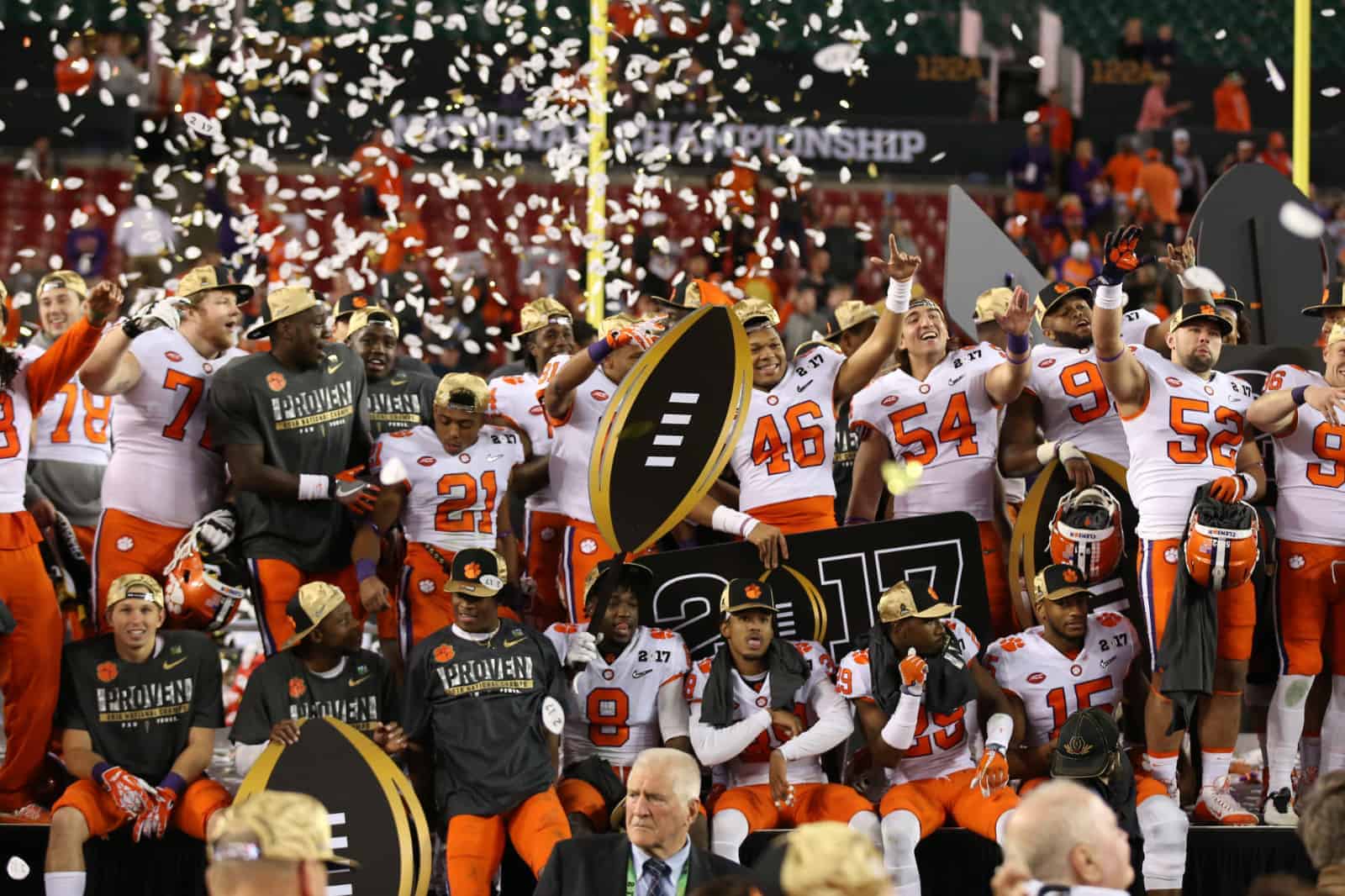 The college football bowl schedule for 2017-18 is set to be announced today, including the College Football Playoff and New Year’s Six games.

12:06PM ET – Good afternoon, everyone! We’re just settling in for this seemingly days-long rehash of everything we’ve already seen this year over on ESPN.  Hang with us this afternoon for bowl updates as we receive them!

These cost cuts have hit ESPN to the core. They had to lay off the "SPN" from their mic flags.

12:24PM ET – ESPN tweeted nearly 15 minutes ago that the rankings are in, but they are still “building the graphics”.  They have 83 analysts and one graphics person, apparently.

Dang…Bama got in over us.

12:58PM ET – Brett McMurphy reports that the New Orleans Bowl will feature Troy and North Texas.  Interesting battle of two great young coaches (Neal Brown from Troy, Seth Littrell from North Texas) and two dynamic offenses.  Also, the New Orleans Bowl is quite the familiar destination for UNT, having played there each year between 2001 and 2004.

1:18PM ET – McMurphy on the case again, letting us know that FAU and Temple will be in the Boca Raton Bowl.  The Lane Train keeps rolling.  Temple finished the season 6-6, 4-4 in the AAC, in their first year with coach Geoff Collins.  In not-so-important news, this is the first Owls vs. Owls matchup I can recall in a bowl game.

Also, while we again waited for ESPN to slooooowly drip out this information:

2:20PM ET – Instead of waiting 40 more minutes for the four-letter:

2:35PM ET – Stanford and TCU are reportedly headed to the Alamo Bowl.  Interesting.

2:52PM ET – Texas will reportedly head to the Texas Bowl.  Its last bowl appearance, coincidentally enough, was in the 2014 Texas Bowl, which it lost, 31-7, to Arkansas.

2:56PM ET – Michigan State and Washington State will head to the Holiday Bowl in San Diego.  Also, New Mexico State and Utah State will play in the Arizona Bowl.  This is NMSU’s first bowl appearance in 57 years.

3:24PM ET – UVa’s opponent in the Military Bowl will be Navy:

Virginia in the Military Bowl, as @RTD_MikeBarber reported. It would be the third time Navy has played in the bowl, the second time in Annapolis. Virginia playing in first bowl game since 2011.

3:29PM ET – Kentucky is, again, headed to the Music City Bowl.  They will take on Northwestern.  Also, the Texas Bowl lineup is set, as it will be Texas vs. Missouri.

3:33PM ET – LSU and Notre Dame will play in the Citrus.  Purdue and Arizona head to the Foster Farms.

3:49PM ET – SMU will head to the Frisco Bowl to face a to-be-named opponent.

Drama at the @novaAZBOWL announcement. The two teams they thought they had, are no more. Announcement still pending… pic.twitter.com/sgzE8aT6nO

3:56PM ET – USF will head to the Birmingham Bowl against an unnamed opponent.  CMU and Wyoming will face off in the Idaho Potato Bowl.

4:02PM ET – Texas Tech will be USF’s foe in the Birmingham Bowl.  Florida State will greet Southern Miss in the Independence Bowl.

4:17PM ET – UCLA and Kansas State will face off in the Cactus Bowl.

4:20PM ET – Temple now moves to the Gasparilla Bowl to play FIU.  A lot of last-minute jockeying going on here.  Akron will take Temple’s place against FAU in the Boca Raton Bowl.

4:24PM ET – West Virginia will head to the Heart of Dallas Bowl.  The Mountaineers will play Utah.

Also, Duke and Northern Illinois will be your 2017 QuickLane Bowl.

4:30PM ET – Louisiana Tech joins SMU in the Frisco Bowl, as our day starts to wind down.

Bowl eligible teams that did not go bowling:

And with that, so ends our day.  Thanks for following along, everyone, and enjoy bowl season!

Can We All Say JOKE together? Ohio State was a joke last year and Alabama a joke this year. I quite.

When you say “I quite” does that mean you are no longer going to post? That would be nice.

Welcome to the Alabama invitational. Where as long as you have a scripted A on your helmet, it doesn’t matter who you play and how you look when playing, you will always be invited to the party!

They don’t have an A on the helmets, they’re numbers. Buckeyes got in last year with no Conference Championship either. As in playing teams, not much difference in scheduling. Bama just does not lose by 31 to Iowa.
Honestly I am happy to see Bama in but would’ve respected it if Buckeyes would’ve gotten in as well.

There’s no a on they’re helmets crybaby lol

Ohio State got in last year because of their quality wins (top 15 wins). Alabama didn’t have any of those this year. Apparently Alabama won the eye test, I just don’t understand how beating A&M (who loss to UCLA) by 8, Miss St by 7 late, and beating LSU by 14 (who lost to Troy) passes the eye test. Anyway, ESPN got what they lobbied for all week. Hopefully for their sake they understand the implications of having 3 teams from 1 sector of country and leaving out legitimate contenders from the Midwest and West coast. Ratings will be great down south but will that be enough to make up for the disinterest just about everywhere else? Could be more layoffs coming at ESPN.

I believe Bama got in because the committee knows that when you play Bama, they actually show up & if they ever do lose, it is not by much. Plus by the time Bama plays Clemson they (should) be healthy again. I don’t think ESPN was lobbying for anything but I was not there so I would not know. I would think they would’ve wanted Wisconsin to win so it would’ve been easy decision for them. I think because The Ohio State struggled with a Wisconsin team that only beat an ok Northwestern team, may of been the difference come this weekend. Yes, Buckeyes had a better resume then Bama. If Buckeyes would’ve won by 30, they would’ve of been in. Buckeyes also only got in last year because they only had one loss, I supported them getting in over Penn St & even when they lost to Clemson 31-0 did not change my mind about them so that (top 15 wins) meant nothing in the long run. Buckeyes losing to Oklahoma at home the way they did, plus when you allow Iowa to score 55 on you, which was the worst ever, does not help.
Bama did not pass a the eye test with its wins over Miss St, LSU & Texas A&M but you know what you get from Bama when you play them. I do agree with you on the ratings, if ESPN really thought they were going to have a problem with them, they would’ve put Buckeyes in. I think they just wanted the four best teams, of course not everyone will agree with it.
It is interesting how you picked three Bama wins to bring up the eye test yet you never mentioned the loss at Auburn or Buckeyes losses which probably was the deciding factor. Anyways, Buckeyes had a great year plus they are going to a great bowl playing a great USC team,

I will give you the point on Alabama’s consistency. I think we can count on Alabama giving Clemson a competitive game, something the Buckeyes can’t guarantee. The Buckeye’s highs are pretty high and their lows are very low.

End of day, tough decision between two teams that had a fair amount of flaws (in my opinion USC deserved more consideration). Doubt either team would be able to beat Clemson.

Until there is parity of schedules, none of this matters. It’s clear that playing 9 games in conference is tougher than 8 games, because it adds more guaranteed losses to the schedule and “weakens” SOS. You can’t argue against that.