Coastal Carolina to play at UCLA in 2023 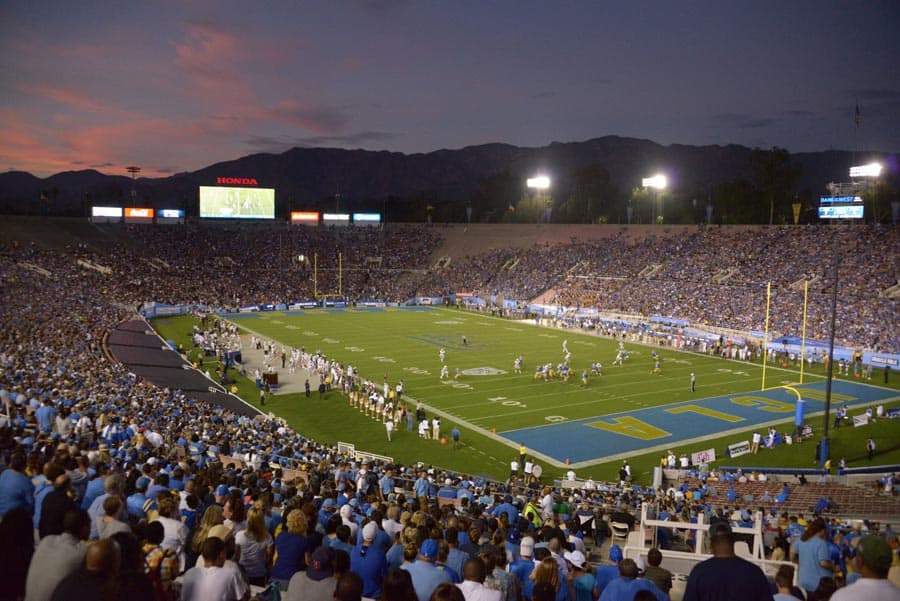 The Coastal Carolina Chanticleers will play at the UCLA Bruins in 2023, FBSchedules.com has learned.

Coastal Carolina will take on UCLA at the Rose Bowl in Pasadena on Sept. 16, 2023. The Chanticleers will receive a $1.1 million guarantee for the game, according to a copy of the contract obtained via a Freedom of Information Act request.

The game was scheduled with the condition that Coastal Carolina becomes a full member of the Football Bowl Subdivision (FBS) by 2018, per the contract.

Coastal Carolina is currently in the Football Championship Subdivision, but is slated to move up to the FBS and officially join the Sun Belt Conference on July 1, 2017. After one season as an FBS transitional team, they would then be eligible for full FBS status in 2018.

In addition to the UCLA contest, FBSchedules.com has also learned several dates for CCU football games in 2016 and 2017, per copies of the contracts. Those games are listed below:

According to MyrtleBeachOnline.com, Coastal Carolina is also set to host Liberty and Monmouth in 2016, and the Chanticleers will also travel to Presbyterian on Oct. 29, 2016, according to the Blue Hose’s official website.

Games against other Big South foes next season remain in flux, which includes Charleston Southern, Gardner-Webb, Liberty, and Monmouth.

If this was an SEC team scheduling Coastal Carolina, there would be 60 comments by now.

You can’t compare UCLA’s schedule with the crap that comes from the SEC.

Also, as a Trojan fan, I hate UCLA.

Joe,
SEC fans don’t have time to get on here & go through details & complain about what other conferences are doing, we just don’t have the time to complain in detail about every little thing. Congras to UCLA adding Co Carolina, I think its GREAT!

SEC fans go to Yahoo! and search for Google, that’s why they’re not here.

I love how the SEC homers try so hard to defend the SEC’s weak scheduling.

UCLA is playing true road games. They are also playing Cincinnati and Memphis, which are as close to Power 5 teams as possible. That is in addition to playing Texas A&M and Hawaii one year, and Oklahoma and Fresno State another year.

The Pac-12 plays nine conference games. And that’s supposed to matter? Do you people really think all conferences and all teams are equal?

Here’s the deal. The NFL votes for the best players by drafting them. It’s not a cheap process, so they are only going to take the absolute best players.

In the last four NFL drafts, the Stanford has seen 19 players drafted. Not bad. They lead the Pac-12 in number of draft picks.

And then there is the depth of the SEC. Last year, the 2015 draft, three Pac-12 schools had no players drafted. The SEC has only had three schools come out of a draft without a player being picked in the four year span I looked at. Over the four years, the Pac-12 had 7 teams without a player selected in that year’s draft.

So, you see, every year, every game, in the SEC you are lining up against quality opponents. That’s not the case in the Pac-12.

Sorry, I can’t hear you. I keep hearing the sound of the SEC West going 2-5 in bowl games last year.

Just because you have good players doesn’t mean your team good. Arkansas lost to Texas Tech and Toledo. LSU almost lost to 3-9 Syracuse. Ole Miss got blown out by Memphis. Auburn and Florida both went to overtime against an FCS team. Miss St didn’t play a power 5 non conference opponent… The only good team in the SEC is Alabama, but even they won’t travel outside of the south. Every time you chant SEC greatness, I hear hollowness.

Since when is a 13-point loss a blowout and a 10-point road win (basically 17, garbage TD) an almost loss??? Yes, 6-6 Auburn had to beat 14-1 and FCS national championship participant JSU in OT. That’s the SEC west’s 7th and and worst team. The PAC 12’s overall 3rd best team lost to Portland State… PORTLAND STATE!!! Do you want to compare each P5s overall records in OOC wins/losses? Because the SEC comes on top in win to loss OOC %. Every conference/division has a bad year in bowl season. And why is Memphis beating Ole miss so huge??? Oh yeah… they’re in a NY6 bowl.

Let’s take a larger sampling of the SEC’s success than just one division in one year.

I mean, I get why you do that, because the facts aren’t on your side. So, let’s narrow the focus to one year and then narrow it even further to just specific teams.

Nobody else is even close.

The reason the CFP was created was because of the BCS standings being skewed to favor total wins and conference champions that played 8 conference games and a title game. (There’s a reason teams expanded to 12+ conference teams. There’s also a reason why the Big 12 has suffered the most from the CFP without playing a championship game.)

No one in their right mind could say the best team in college football every single year from 2004-2009 was the Pac 12’s USC.

Also, despite past success in the extinct BCS, the SEC hasn’t had post season success since 2012-13. That’s 3 years.

I would love to compare overall OOC records, but guess what?!?! You can’t compare them, when the SEC plays the least amount of Power 5 opponents (have to compare total percentage,

USC is 8-5 and a joke. UCLA was beaten by WSU in their own stadium and has the same record. Okay, maybe the 4th best team. But still, the PAC’s 4th best team was beaten by Portland State, a historically bad FCS team. In 2015, the SEC went 4-3 against ACC teams. That’s including our worst team, USC, beating the ACC’s second-best team in 11-2 UNC and (as you would call it) “almost beating” their best team in 13-0 in clemson, Hahaha!

Colin White, what you are saying over and over is one of the most insanely idiotic things I have ever heard. At no point in your rambling, incoherent responses were you even close to anything that could be considered a rational thought. Everyone in this room is now dumber for having listened to it. I award you no points, and may God have mercy on your soul.

Outside of that, enjoy losing every meaningful bowl game once again. Also, Ole Miss is just as bad as your QB’s rap career. Embarrassing. The SEC is just riding the coattails of Alabama’s success. SEC teams are perennially overrated. Your refusal to under the surface that eSECpn paints for you is truly embarrassing.

Your comment which is covered with obvious rants and nothing to prove my statements wrong doesn’t change the fact that USC IS A JOKE!!! THEY GOT POUNCED BY STANFORD TWICE IN THE SAME YEAR! And I can promise you the Sugar is more meaningful, and has nearly 10x the payout of that joke called the Holiday Bowl. Have fun getting pounded by Wisconsin in that meaningless bowl! oh and btw, USC IS A JOKE!!! Also, USC is just as bad as steve’s drinking problem.

Yeah, we are still feeling the effects of sanctions. I’m not denying that. So good insult. Tell me something I don’t know. But last time I checked, when Alabama was on sanctions, they suffered multiple losing seasons. How many did USC have? Oh, that’s right. None. That’s called “staying power.” Even with playing with less than 65 scholarship players, we put up 8-10 win seasons. Every other team is playing with 85.

I love how you get so frustrated with people chanting SEC bias and the SEC is overrated. You just know it’s true deep down in the deep down south. Haha.

Maverick,
That’s your argument? Because USC has had no losing seasons & Bama did makes USC a “staying power”? USC was ranked #6 at the beginning of the season, now their heading to the Holiday Bowl. USC has a long way to go, that’s not bashing, that’s facts!

Hey Maverick, how does it feel to have your team lose it’s meaningless bowl game??? Being an ole miss fan, I’m feeling pretty good about my rebs’ outcome. Oh and beat your chest, because all I hear is the fact that THE SEC IS 8-2 IN BOWL GAMES and the FACT BAMA IS ONCE AGAIN IN THE ‘SHIP where they belong. How did the Big 10 champ do??? And yes, 7-5 was a down year, but this year the SEC is 8-2, so shut your SEC hatin’ butt up!!! What an idiot..

From a Pac 12 fan here, what a joke! I guess Incarnate Word was tied up by Baylor.

CCU is starting their transition to 1-A…..they’ll be a full Sun Belt member in ’17.

Get a grip. UCLA has quality opponents every single year, including 2023. Clearly you haven’t looked at the schedule for UCLA over the next few years to have made such a ridiculous comment. Very few teams could compare to the decent quality of what UCLA has on the OOC schedule over the next decade.

UCLA’s OOC schedules through 2125 are absolutely loaded. Even the G5 teams have been pretty good for their level (Memphis, Cincinnati, BYU, SDSU…Fresno’s usually good even though they had a bad year) and a number of those games are true road games. They’ve more than earned the right to one cupcake game in 7 years.

Ok give us a chance we just moving up and we have to learn and take some bad like losses. But for last copile years we been really good in fac and watch out we may be young and new to the fbs teams but dont over look us. Go chats. Ccu .

UCLA will play home and home series with Texas A & M. Oklahoma, Michigan, LSU, BYU, Cincinnati, Memphis, and Georgia. Other games include San Diego State and Fresno State which are a level above the cupcakes that we see on many teams schedules. UCLA deserves to have a game where they don’t have to return a visit. The Bruins will be playing Michigan the week before or after the CCU game. UCLA’s program is moving into upper tier status as wins, recruiting, and schedules reflect that.

I think this is great for Coastal. This will get them good national media coverage. So good for them and UCLA!

Since when is a 13-point loss a blowout and a 10-point road win (basically 17, garbage TD) an almost loss??? Yes, 6-6 Auburn had to beat 14-1 and FCS national championship participant JSU in OT. That’s the SEC west’s 7th and and worst team. The PAC 12’s overall 3rd best team lost to Portland State… PORTLAND STATE!!! Do you want to compare each P5s overall records in OOC wins/losses? Because the SEC comes on top in win to loss OOC %. Every conference/division has a bad year in bowl season. And why is Memphis beating Ole miss so huge??? Oh yeah… they’re in a NY6 bowl.

The Ndsu Bison from the fcs would kick most of your teams asses.I hope to see that soin as well.Drive for five jan 8th against a great jacksonville state team.The fcs has the playoff thing down.P. the sec blows the pac 12 away.Cant even believe thats an argument.Usc is not even close to the powerhouse they were.Thats obvios.