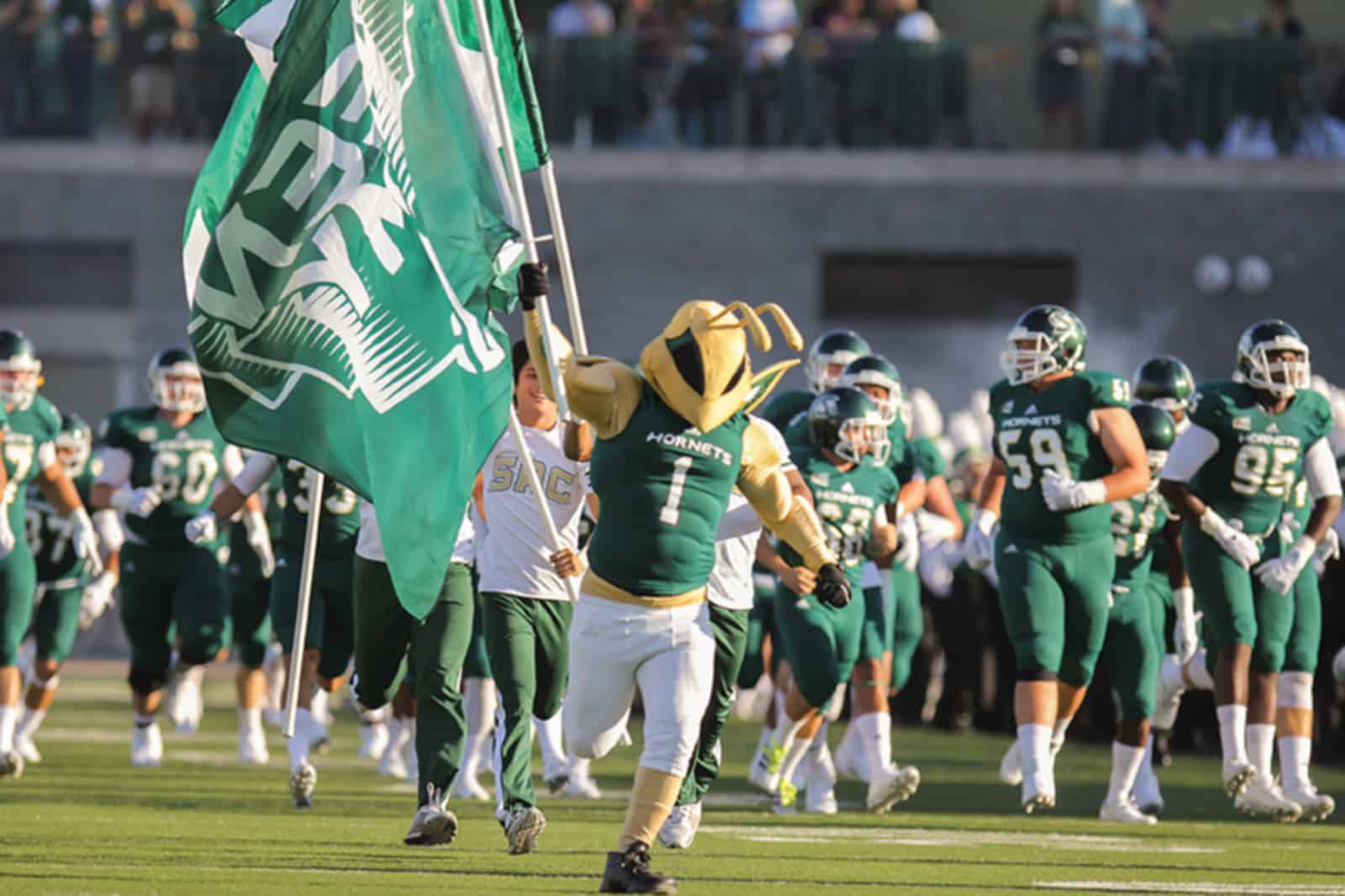 Welcome, everyone, to the week where we separate tricks from treats. As tempting as it may be to do this for our three games this week, we will avoid that temptation. There are a number of fun games this week, from Georgia-Florida (where the eyes of this site’s owner will be focused) to SMU-Memphis. As you know, we tend to stay a little more under the radar here at CYS, so we’ll take you to two significant battles in one FBS league, along with our FCS game of the week.

Before we venture into this week’s action, we owe you a trivia question. To the trivia!

TRIVIA (answer at the end of the column):  UConn’s 56-35 victory over UMass Saturday was its first over an FBS foe in two years.  Who was the last FBS team UConn defeated?

Rutgers 44, Liberty 34:  Goodness. If you’re going to have a five-game win streak go by the boards, it might as well be to a 1-6 team on the road when you’re giving a touchdown…? Rutgers moved the chains a boggling 12 times in 17 attempts on third down, as our good friend Damien Sordelett chronicled over the weekend. Combine that with the fact that the Scarlet Knights ran the ball 55 times for 271 yards, and that’s a recipe for disaster for the visitors from Lynchburg. To be fair, “Buckshot” Calvert extended his streak of games without getting picked to six, but that’s a minor consolation. We cringed a bit last week at some of the suggestions that Liberty could end up in the Belk Bowl, but the Flames are now staring down needing to win two of their final four to get to a bowl, period. Two of those games are at BYU and at Virginia. If they can’t steal one of those, any trip-up in games against UMass and New Mexico State would ruin a season that once had a decent amount of promise.

Wofford 35, Chattanooga 34 (OT):  This…wow. What a finish. What a game. The result — and everything that led to it — was completely befitting of a first-place battle in one of the finer FCS leagues in existence. We told you to be on the lookout for Chattanooga’s Ailym Ford, and he certainly didn’t disappoint. Ford galloped his way to 136 rushing yards and two scores on 29 carries, setting up the Mocs to leave Spartanburg with the victory. In fact, it was a Ford trip to the paint in extra time that set up his club to at least draw the game level following a Joe Newman score for Wofford. The Mocs went for two, however, and the pass attempt did not connect.

The stats are an interesting read, should you wish to review them. Wofford won nearly every rushing category, while Chattanooga nearly swept the passing categories. Things get no easier for the Terriers, either; following non-league games at Clemson and against Mercer, another likely first-place matchup awaits, as GSP rivals Furman make the short ride up Interstate 85 to descend upon Gibbs. Wofford then closes with a hard-charging Citadel club, which has itself taken three straight.

Chattanooga, meanwhile, faces Furman itself this Saturday, and also battles The Citadel between trips to Samford and VMI.

UConn 56, UMass 35:  This was UConn’s first FBS victory in two years. I’m not sure there’s much else I could — or should — say about that game.

THREE I’M WATCHING (all times Eastern, all lines for entertainment purposes only)

Middle is an interesting case study. On one hand, the Blue Raiders’ record looks abysmal. On the other, Middle has losses at Iowa, at Michigan, and at home against Duke. On one hand, it trounced FIU in a monsoon last week, keeping itself alive for a potential “straight draw” to a bowl game. On the other, its three wins are against aforementioned FIU, Marshall, and Tennessee State of the FCS.

Charlotte also has that potential “straight draw” to a bowl, but it just got a wild, 39-38 victory over North Texas to eradicate a four-game losing streak (though, admittedly, three of those losses came on the road, and one was to Clemson). Three of Charlotte’s final five, counting that victory over the Mean Green, are at home. This is a good sign for the 49ers, as they are 3-1 on the turf at Jerry Richardson Stadium.

Both teams average over 400 yards of offense per game (Charlotte 415.5, Middle 406.5), and both — how to say this — struggle on defense. This game features the 11th and 14th-ranked defenses in Conference USA, and Charlotte’s 420-plus yards per game surrendered, while large, still looks “up” at Middle’s 475. The clubs have combined to surrender 500-plus yard outputs in five of their combined eight league tilts.

It stands to reason, then, that quarterbacks Asher O’Hara of Middle and Chris Reynolds of Charlotte will play huge roles in this one. O’Hara ranks third in total offense among C-USA players at nearly 283 yards per game, with Reynolds a few spots behind at 226-plus. O’Hara also leads Middle in rushing with 609 yards and six touchdowns, so the 49ers will obviously need to be disciplined in gap and edge contain. Reynolds, the reigning C-USA Offensive Player of the Week, logged a career-best 96 rushing yards in the win over UNT last week, on the way to a school-record 432 yards of offense.

Either team could run the table, starting with a win here. Charlotte finishes at UTEP, home for Marshall, and at Old Dominion. Middle is home for Rice and Old Dominion, and closes the season in Bowling Green for another installment of the 100 Miles of Hate rivalry with Western Kentucky. Middle’s streak of four straight bowl games is in jeopardy. Charlotte is still playing for the possibility of a bid to its first-ever bowl game.

Notice a theme? We’re definitely on the C-USA tip in this week’s feature, though this game takes on a bit of a different spin than the game prior. Western started the season in shocking fashion, falling to FCS foe Central Arkansas in Bowling Green. The Hilltoppers have taken four of the next six, though, and started the league slate 4-0 before a three-point loss at Marshall last week that may eventually loom large in deciding the East.

FAU dropped two games in large fashion to then-ranked teams,losing at Ohio State and UCF — remember them? — to start the year. Lane Kiffin’s Owls have also nicely bounced back, also losing only once — and also to Marshall — over the last six.

Neither team really runs the ball all that well, with both in the bottom five of the league in rushing. FAU fared particularly poorly in the Marshall loss, logging 36 totes for a paltry 57 yards. Western has cracked the 134 yards it registered in its own Marshall loss just twice all year, going for 184 against Central Arkansas and 225 against Army.

This gives us an interesting battle of quarterbacks to watch, with FAU sophomore Chris Robison battling WKU senior Ty Storey. Robison nicely rebounded from somewhat pedestrian games against Middle Tennessee and Marshall in a victory over ODU last week, hitting on 17-of-24 throws for 208 yards and two TDs against one pick. Robison has registered 15 scores against just four rips this season, and five of his Owl targets have registered 20 catches or greater this season.

Storey, conversely, has compiled his numbers despite essentially missing the first three games of the year. The veteran has attempted 28 passes or greater in four of his five starts, connecting on at least 21 of those throws in those games. WKU also spreads the ball around in its short passing game, with receiver Jahcour Pearson (46 receptions, 453 yards, four scores) the primary beneficiary of the offense’s throws.

The stakes in this contest make it especially compelling, and the Owls will try to win their fourth straight against the Hilltoppers since Lane Kiffin arrived in town. The winner has the inside track to playing for a C-USA title — though they’ll probably have to face the unenviable task of winning in Ruston to do it.

If you’re not paying attention to Big Sky football, now is probably the time. Though UC Davis, which was once a top-ranked team, has fallen on hard times, Weber State and Sac State are both in the top six in the FCS. Sacramento State’s sports information department points out a crazy stat that underscores the rise of the Hornets this season. Sacramento State had not won four games in a row in a single season in 28 years. To put a finer point on it, the Hornets were still three years from joining I-AA/FCS at the time.

Sac State will be aiming for a fourth-straight Big Sky Offensive Player of the Week award, with Kevin Thomson taking the honor in back-to-back weeks before Elijah Dotson did so last week. Thomson is 13th among FCS passers, throwing for 2,275 yards on the year. The senior has connected on 188-of-286 throws, scoring 23 touchdowns against just six picks. Dotson is also a top-50 receiver — as a running back — and has 611 receiving yards on 52 catches, to go along with four scores.

Weber State will look to win its fifth-straight against Sacramento State. The Wildcats are 29th in the land in total defense, surrendering just 347.4 yards per contest. The big area to note for Weber is its pass defense, which ranks a middling 71st and allows 231 yards per game through the air. The Wildcats have, interestingly, thrown just seven passing touchdowns all season. They will look to seize an opportunity against the 84th-ranked pass defense in the Hornets.

The winner of this game is likely playing for a top-eight seed in the FCS playoffs. The loser is not necessarily out of that discussion — especially with the way FCS teams not named North Dakota State and JMU have been falling each week — but will find its road considerably tougher.

TRIVIA ANSWER:  I asked earlier:  UConn’s 56-35 victory over UMass Saturday was its first over an FBS foe in two years.  Who was the last FBS team UConn defeated?

UConn defeated Tulsa, 20-14, on October 21, 2017, in East Hartford. It then proceeded to lose 22 FBS games in a row, including last year’s outing against UMass.