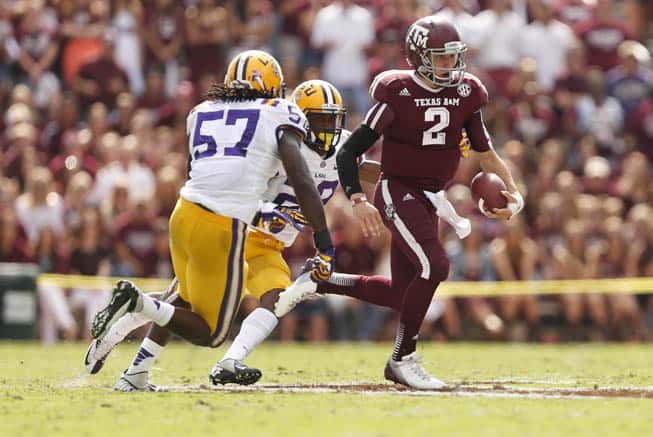 It’s Thanksgiving week — almost — and this week in the SEC feels very much like the calm before the storm. Be not confused, there are some great games on the docket this weekend. The Iron Bowl, however, awaits us in Week 14. While we bide our time until the gigantic matchup on the plains, there is much on which we should focus this week.

As we did on the ACC side, we will celebrate Thanksgiving in Clear Your Schedule fashion. Prepare yourself for a football smorgasbord this week, with three courses on each game. Before we get to your football feast, here’s your snack: our trivia question!

SEC Trivia, Week 13 (answer at end of column): Just one of the three FCS teams playing SEC opponents this weekend (Coastal Carolina, Chattanooga and Georgia Southern) owns any victories over SEC opponents. Which school has claimed any victories, and whom did they beat?

Stuffing: Mississippi State has played Arkansas in the Natural State ten times. They have lost nine times and tied once. The Bulldogs are 0-3 in Fayetteville, but more importantly, they are 0-6-1 in Little Rock, where this week’s contest is being played. The last time MSU beat Arkansas back-to-back — anywhere — was in 1992.

Turkey: Mississippi State has played three consecutive top-twelve teams since defeating Kentucky on October 24th. Those three teams (South Carolina, Texas A&M and Alabama) have outscored the Bulldogs 105-64. Arkansas has played four consecutive ranked teams, including three straight top-twelve teams of their own. Those teams have outscored the Razorbacks 173-48. Arkansas has allowed 537, 532 and 531 yards to South Carolina, Alabama and Ole Miss, respectively.

Pumpkin pie: Arkansas coach Bret Bielema has won 47-of-55 home games in his coaching career. Three of those losses have come this season. The Razorbacks are 3-3 between Little Rock and Fayetteville in 2013.

Stuffing: Coastal Carolina appears to be in great shape for the FCS playoffs, and can still win the Big South Conference regular season title. They cannot win the title on the field, however. Liberty plays at Charleston Southern on Saturday, and a Charleston Southern victory gives the Buccaneers the outright title. If Liberty defeats CSU, the Chanticleers would win the conference title and the automatic playoff bid by virtue of the three-way tie between themselves, Liberty and CSU.

Turkey: Coastal Carolina and South Carolina have never met in football, but this does not mean that the two programs are not familiar with each other. Former Gamecock receiver DeMario Bennett has caught 38 passes for 570 yards and four scores for the Chanticleers. He caught one pass for four yards at South Carolina before transferring. Aramis Hillary also quarterbacked the Chanticleers for three seasons after transferring from Columbia. Hillary, whose eligiblity was completed last season, completed 226-of-352 passes in 2012, throwing for 21 touchdowns against just eight interceptions.

Pumpkin pie: If South Carolina extends their home winning streak to 17 in this game (the longest active home winning streak in the country), this would also give the Gamecocks four consecutive nine-win seasons. This has never occurred in program history. Also, this would give Steve Spurrier (74-39) his 75th career victory as the Gamecocks’ head coach.

Stuffing: Chattanooga’s postseason options are also a bit confusing. The Mocs finished the regular season 6-2 in the Southern Conference. However, two other games will determine their fate surrounding the conference’s automatic bid. If Furman defeats Wofford and Samford defeats Elon, this creates a three-way tie, which would give Furman the bid based on tiebreakers. If Elon defeats Samford, this creates a two-way tie between Chattanooga and Furman (assuming a Furman victory), which would place Chattanooga in the playoffs with the automatic bid.

Turkey: Chattanooga started their season 2-2, including a loss to Georgia Southern, who also plays an SEC opponent this week. The Mocs have gone 6-1 since, though, with their only loss coming in overtime at Samford last week. UTC ranks 60th in the FCS in total offense, averaging 378.4 yards per game. Quarterback Jacob Huesman has completed 164-of-240 passes for 1,637 yards and 16 touchdowns. Huesman is also the team’s leading rusher, carrying for 894 yards and nine scores. The Mocs’ defense is 11th-best in the FCS in total defense, surrendering 319.3 yards per game. Chattanooga has allowed greater than 24 points in a game just twice, once in a loss to UT-Martin and the other in a victory over Appalachian State.

Stuffing: Georgia Southern has won 30 of 41 career games against Florida teams. Unfortunately for the Eagles, none of those victories have come against Florida. The Gators defeated GSU in 1986 and 1996.

Turkey: GSU is a transitional FCS team. They will move to the FBS and the Sun Belt Conference to begin the 2014 season. Though they are ineligible for the FCS postseason and do not technically count in team statistics, the school has posted impressive numbers. The Eagles average 453.7 yards per game, with 353.5 of those yards coming on the ground. The next closest rushing offense at the FCS level, Cal Poly, averages just 309 yards per contest. Florida averages 151.4 rushing yards allowed per game.

Pumpkin pie: Florida has six losses and is in danger of missing out on a bowl game. The Gators have played in 22 straight bowl games, which is the second-longest active bowl streak in the FBS. Ironically enough, the only team with a longer streak, Florida State, could possibly eliminate the Gators this season.

Stuffing: The Aggies will play just their third road game of the season Saturday in Baton Rouge. They have not played outside College Station since defeating Ole Miss 41-38 in Oxford on October 12th. A&M will close their season next week at Missouri.

Turkey: Texas A&M is attempting to become the fourth team in school history to gain 6,000 yards in a season. The Aggies lead the SEC in virtually every offensive category. A&M has recorded no fewer than 498 yards of total offense in a game this season, and averages 572.5 yards per game against SEC opponents. Conversely, LSU is fourth in the conference in total defense (353.7 yards per game), despite being blistered for 422.7 yards per game by SEC offenses. The Tigers allowed just 240 yards of offense in a 17-6 victory over Florida, but has allowed 372 yards or greater in every other conference game.

Pumpkin pie: No LSU passer had thrown for greater than 2,500 yards in consecutive seasons before this year. Zach Mettenberger has followed up his 2,609-yard passing season from last year with 2,733 yards (and counting) this season.

Stuffing: Georgia has won 52 of the 66 lifetime meetings between the two schools. The Bulldogs are owners of three straight victories over the Wildcats, and have notched an 11-2 record in the series since 2000.

With much of the focus on Georgia’s loss on a miraculous pass completion by Auburn, the Bulldogs’ offense compiled 38 points and 532 yards last week. The Bulldogs have passed for 856 yards over the last two games. Receiver Michael Bennett is settling nicely back into the Georgia lineup, catching seven passes for 89 yards against Auburn.

Pumpkin pie: Kentucky running back Raymond Sanders is 68 yards away from moving into the top 15 among Wildcat career rushers. Former Kentucky rusher Sonny Collins (1972-1975) holds the top spot, rushing for 3,835 yards during his time in Lexington.

Stuffing: These two schools situated along Interstate 40 in Tennessee have met 106 times in their history. The first game between the two took place in 1892. Vanderbilt won that game 12-0. The Commodores have not won in Knoxville since 2005, and have won just 11 of the 49 games played on Rocky Top.

Turkey: Vanderbilt is bowl-eligible for the third consecutive season for the first time in school history. Tennessee would remain in contention for a bowl game by beating the Commodores. The Vols are third all-time in bowl appearances, behind only Alabama and Texas. The school has not made a bowl appearance since the Music City Bowl in 2010, however.

Stuffing: Missouri is just two games from their first-ever SEC East championship. If the Tigers defeat Ole Miss this week and Texas A&M next week, they will face the Alabama-Auburn winner in Atlanta. The Tigers have won nine games in a season just six times in school history. Four of those seasons have come with Gary Pinkel at the helm.

Turkey: This is a battle of top-20 offenses. Ole Miss is 15th in the FBS in total offense, averaging 498 yards per game. Missouri is ranked 17th, averaging 492.6 yards per game. The Rebels average 446 yards against SEC teams, while the Tigers average 455 yards per game in conference games. The Rebels have registered 400 yards or greater in each game since losing to Alabama, a span of six games. Mizzou has eclipsed the 400-yard mark in its last four games, totaling just 375 yards against Georgia on October 12th. There will also be a rushing battle worth watching in this game, as Ole Miss’ 31st-ranked rushing offense (200.6 yards per game) squares off against Missouri’s 14th-ranked rush defense (111.9 yards per game).

Trivia answer: I asked earlier: Just one of the three FCS teams playing SEC opponents this weekend (Coastal Carolina, Chattanooga and Georgia Southern) owns any victories over SEC opponents. Which school has claimed any victories, and whom did they beat?

Very good ‘turkey’ recap of games this week.I figured A&M-LSU would be the feature game,but I guess not.Some of these games will be important games as teams are still shuffling for bowl position.I think we are all looking forward to the last weekend of the season where football stories will be written,or else back to the drawing board.Great job.

How about those Georgia Southern Eagles…??