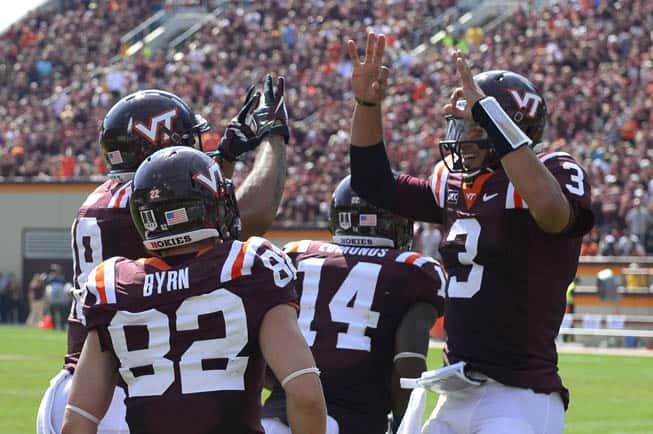 Week six in the ACC was an unusual mix of the totally expected and the totally unexpected. Clemson, Miami, Boston College and Virginia Tech followed the script, while Florida State, Wake Forest and Ball State surprised many. Sure, most expected the Seminoles to win, but virtually no one saw a nine-touchdown whitewashing of the Terps in the cards. Wake Forest defeated NC State 28-13, but is still being outscored 93-45 in three conference contests. Ball State’s offensive prowess — and Virginia’s struggles — were chronicled in this space last week, but 48 points on the visiting ledger in Charlottesville had to be a pleasant surprise to even the most ardent Cardinal fan.

This week features just four conference tilts. The frontrunners in both the Atlantic and Coastal have a chance to add some separation between themselves and their challengers. Virginia gets the opportunity to quiet the critics of coach Mike London, while Maryland sees how they can respond after last week’s debacle in Tallahassee. Duke and Georgia Tech step outside of ACC play for challenging foes. Our tour around the ACC begins in just a few words, but first, our trivia question!

ACC Trivia, Week 7 (answer at the end of the column): Boston College running back Andre Williams finished just one yard short of the BC single-game rushing record with a 263-yard effort against Army last week. Who holds that record, and against whom was it set?

Program guide: The Hokies just keep getting it done. Frank Beamer’s squad broke out the smoke and mirrors yet again in a defeat of North Carolina last week. Tech rushed for just 48 yards against the Tar Heels, but Logan Thomas continued his emergence from his season-long struggles to guide the Hokie offense. Thomas completed 19-of-28 passes for 293 yards and three touchdowns in what was easily his best outing of the year. Former walk-on wide receiver Willie Byrn helped Thomas’ cause with four grabs for 123 yards. The Virginia Tech defense also forced three turnovers, two on interceptions by backup quarterback Marquise Williams.

The Hokies get their shot at revenge against Pitt this week, and they get that shot on their home turf. The Panthers pounded Virginia Tech 35-17 at Heinz Field last season, and they bring an impressive array of talent to Blacksburg. Quarterback Tom Savage has thrown for 1052 yards and ten scores, relying on two of the top three receivers in the league. Devin Street and Tyler Boyd rank second and third in receiving yards, respectively, at 111.3 and 106.3 yards per game. Pittsburgh running back James Conner ranks third in rushing at 88.25 yards per game, though his numbers were bolstered by back-to-back 100-plus rushing yard efforts against New Mexico and Duke.

Much was made of the Pittsburgh defense after the Virginia victory, but the question remains whether the real Panther defense is the one that allowed 55 points to Duke, or the one that allowed three points to Virginia. The Hokies rank in the top 15 in every defensive category, while Pitt’s highest defensive ranking is 52nd (passing defense). Even with a number of big-play options on offense, Pitt still needs to contain Logan Thomas, who has completed 72 percent of his passes over the last two games. Combine this with the difference in turnover margin (Pitt ranks 93rd with a negative turnover margin, while Virginia Tech ranks fourth), and the hill looks steep for the Panthers.

Program guide: The Eagle offense has somewhat awakened over the last couple of weeks, scoring 34 points against Florida State and 48 against Army. Running back Andre Williams continues his dominance of the ACC, rushing for 263 yards and five scores against Army last week. This pushed Williams’ conference lead in yards per game to greater than 40 yards (153.6), also giving him the national lead. This is the good news.

Clemson ranks in the top 20 in the FBS in scoring offense, passing offense and total offense. The Tigers have scored 105 points in their last two outings against Wake Forest and Syracuse, and they will look to keep that offensive output rolling in Death Valley on Saturday. Tajh Boyd completed 20-of-27 passes for 455 yards against the Orange, throwing for five scores before getting the rest of the day off. Star receiver Sammy Watkins continued his hot play, catching four passes for 125 yards, including a 91-yard touchdown reception. Boyd’s arsenal of offensive weapons continues to grow, with Adam Humphries, Martavis Bryant and freshman receiver Mike Williams playing starring roles at various points of the season.

The Tiger defense is stout in most regards, as well, ranking 16th in total defense, 17th in passing defense, 35th in total defense and second in turnover margin. The one concern for Clemson is stopping the run, as they rank 79th, allowing just over 171 yards per game. Stopping Andre Williams will be key for the Tigers, and forcing the Eagles to throw the ball will likely help write the story of this game.

Trivia answer: I asked earlier: Boston College running back Andre Williams finished just one yard short of the BC single-game rushing record with a 263-yard effort against Army last week. Who holds that record, and against whom was it set?

Former Eagle running back Montel Harris rushed for 264 yards on 27 carries in a 52-20 victory over NC State on October 17, 2009. Harris scored five touchdowns in the game.