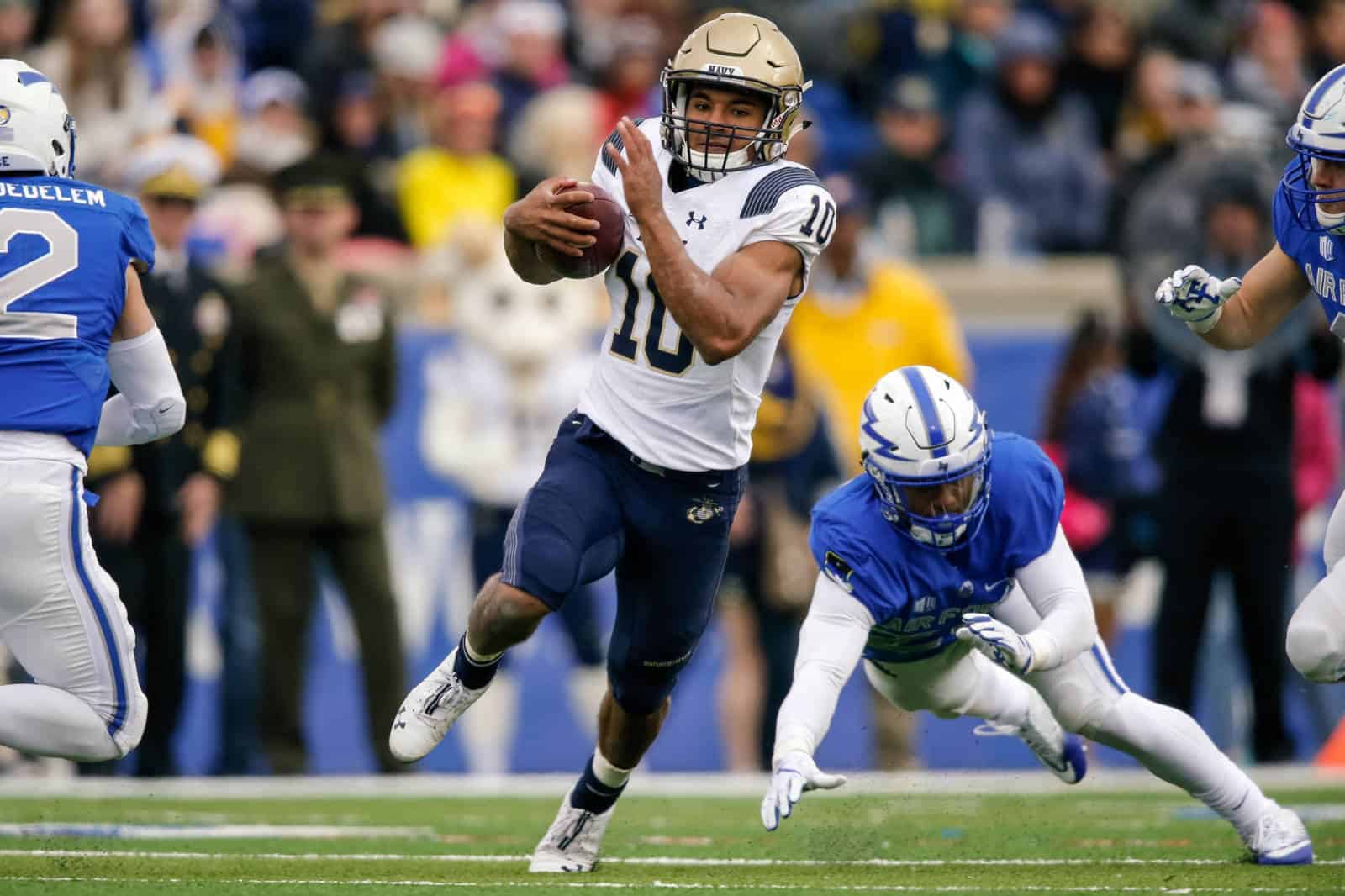 Welcome back, friends, to the sixth (!) week of Clear Your Schedule. As much as we wait for seemingly years to have the college football season arrive, it disappears in what feels like seconds. There’s still plenty of time for great stuff to happen, though, and as we venture into conference play, the stakes keep increasing.

I would ordinarily have a lot more witty stuff to add here, but it’s been a pretty trying week. I won’t go into why, because no one cares, but I just wanted to put that out there for anyone who might wonder why the opening of this piece is a level of thin I’ll never physically reach.

TRIVIA (answer at the end of the column): North Dakota State has the longest winning streak in FCS history, winning 33 consecutive games. Which school broke that streak?

BERRY-ING THE LEDE: An update on a story we brought you last week, where we discussed Oklahoman columnist Berry Tramel’s ridiculous top-ten voting mechanism.

Three of his top ten lost last week, with #3 Cal, #9 USC, and #10 Kansas State all biting the dust. #4 Clemson also nearly suffered the loss of the year in Chapel Hill, with the Tar Heels a two-point conversion away from knocking off the Tigers.

So, hey, what the heck, let’s give you a glimpse into what he’s claiming this week:

My rankings are back — they're always back, every week — and Auburn still is No. 1. https://t.co/OG6Qxm6wC0

If you’re a fan of Notre Dame, Texas, Boise, or Alabama (who finally apparently became a top-ten team), be afraid. Those four are new entries to the festivities.

JMU 45, Elon 10: Ouch. The Dukes came to the 27244 looking to extract some revenge, and man alive, that’s what they did. JMU piled a blistering 521 yards of offense on the home side, holding Elon quarterback Davis Cheek to 189 yards through the air. Also, that stat I cited about Davis Cheek’s streak without an interception:

DiNucci and Elon quarterback Davis Cheek have thrown for 15 touchdowns against just one rip on the year. Cheek’s last rip came last year against USF, a string of greater than 200 throws without one going the other way.

Yeah, that’s also now gone, thanks to an errant throw hauled in by Rashad Robinson. That went along with JMU holding Elon to 227 total yards of offense (29 of those rushing).

This in-game tweet from our good buddy Adam Smith summed up the day’s festivities, and also partially served as the headline for his gamer.

Latrele Palmer 3-yard TD run and JMU is pouring it on Elon.

Elon might work its way back into the top 25 at some point, but this is as authoritative of a loss as the Phoenix have absorbed in quite a while.

UMass 37, Akron 29: In a game that started as our getting a nice little interest pique from two of the final five winless teams playing and ended in a gigantic gambling controversy (warning: link has language…so much language), the Minutemen claimed their first victory of the year over the Zips.

As for the game itself, we don’t hat-tip our good friends over at the Hustle Belt enough, so let’s direct you to their post mortem of the contest.

Wake Forest 27, Boston College 24: Wake Forest held off BC in Chestnut Hill to go to 5-0, and Jamie Newman continued his incredible early-season display. Newman made good on 21-of-33 tosses for 243 yards and two scores, and were that not enough, he scampered 23 times for 102 yards. The ACC’s leader in total offense at greater than 515 yards per tilt didn’t disappoint in this one, racking up another 440 yards.

As great as that output by the Deacs was, though, it was actually bettered by BC. The Eagles racked up 533 yards of offense against Wake, nearly evenly splitting the totals (281 passing, 252 rushing). Star running back AJ Dillon had his best rushing total of the year, carrying 23 times for 159 yards.

In arguably the statistic of the year thus far — and maybe the one that decided the contest — Wake converted a staggering nearly nine times more than did BC on third down. The Deacs converted on a greater amount of third-down tries (17) than the Eagles attempted (12). Wake’s number of third-down tries doubled that of BC. Just one opponent had converted greater than 50 percent of its cracks at the penultimate down — Kansas at 53.33 percent — and it’s probably something to note that Boston College lost both of those contests.

We, as you know, use this spot to take a look at three of the more “under-the-radar” contests that you should watch over the weekend. All times are Eastern, and all lines are strictly for recreational purposes.

Tulane seemed to turn the corner last year in its third year under coach Willie Fritz, finishing 7-6 with a Cure Bowl victory, and that momentum has carried forward into the 2019 season. The Green Wave are 3-1 on the year, though it is worth noting that those wins have come at the expense of FIU, Missouri State, and a Houston club in clear disarray. The performance of Fritz’ club against Auburn on the Plains too, then, must be considered, as Auburn managed just a 24-6 victory.

Army rolls into this one also having taken three of its first four, the only blemish a double-overtime loss at Michigan. The loss to the Wolverines didn’t seem to greatly affect the Black Knights, as they proceeded to hammer UTSA and FCS foe Morgan State by a combined tally of 83-34. Accompanying Jeff Monken’s club will be the fifth-most effective rushing game in FBS. 743 of Army’s 1174 rushing yards have come in those last two blowouts, and Connor Slomka will look to build on his 110-yard output against Morgan State in his team’s last game.

Tulane, conversely, is surrendering 4.21 yards per carry, which could cause quite the concern for the Green Wave. Houston gashed Tulane for a frightening 304 yards on the ground last time out, which should bring pause. Two teams — Auburn and Houston — have provided Army a bit of a blueprint, as they have respectively rushed 45 and 46 times against Tulane.

The Green Wave will need to continue their rushing prowess (1093 yards, 12 touchdowns) against Army to win. Considering Army has allowed nearly three times fewer rushing yards than that total, that might be a tough challenge.

We’ve discussed NDSU at great length in this space, so we need not devote a ton of time to the absolute juggernaut that is the Bison. They are truly the elite of the elite at the FCS level, and they — along with this game and the conference in which the teams participate — continue to prove why the comment we featured earlier this year about the Big Sky being the SEC of the FCS was quite the slight to the Missouri Valley Football Conference.

The Redbirds feature James Robinson, a punishing running back who was up for last year’s Walter Payton Award, which went to former Samford and current Pittsburgh Steeler quarterback Devlin Hodges. Robinson has rushed 79 times for 432 yards and eight scores in the Redbirds’ first four games, even considering his 16-yard outing against Northern Illinois in his club’s first game (and lone loss).

Should the line — and, quite frankly, conventional wisdom — hold and North Dakota State collect the victory in Normal, the Bison would run their winning streak to 26 games, which would tie for second-longest in FCS history and extend the longest current streak of victories in Division I football. KVRR television described last year’s game between the two as “a close two-score loss” by the Redbirds. We’re to that point with North Dakota State, where a two-score loss is “close”.

There should be next to no surprise by what we see from these two squads. The schools rank 127th and 128th in passing offense, trailed by fellow option-loving ground-dwellers Georgia Southern and the aforementioned Army. The two have attempted just 66 combined passes, completing 39.

That means lots of sweet, sweet triple option. These are the top two clubs in the land in rushing offense, with Navy’s 344.7 pacing everybody, and Air Force just behind at 332.8. Navy quarterback Malcolm Perry has scrambled for 275 yards and seven scores on 59 carries, making him the school’s leading rusher at nearly 92 yards per game. The Midshipmen have an impressive stable of rushers, though, with four rushers totaling 100 yards or greater on the campaign.

The main key here will be how Navy’s sixth-ranked defense holds up to the beating it will undoubtedly take from the opening kickoff to the final whistle. The Mids have allowed just 253 rushing yards on the year, but have only faced 81 attempts, or 27 per game. Air Force has outpaced that total in every contest thus far, and the Falcons have logged their greatest rushing attempts total in the fourth quarter of contests (39).

Bonus:  Here are the highlights of that game.