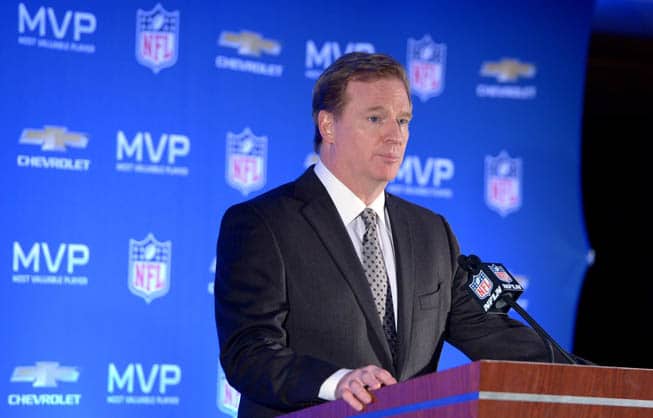 CBS will produce and televise Thursday Night Football for the 2014 season, the NFL and CBS announced today.

The full slate of 16 regular-season games will be produced by CBS with its lead broadcasters and production team, including JIM NANTZ and PHIL SIMMS, on all Thursday night games. In a new twist, NFL Network hosts and analysts will be featured in the pregame, halftime and postgame shows along with CBS Sports announcers.

It’s unknown what CBS paid for the package, but Sports Business Daily reported that initial bids were in the high $200 million range.

“Our goal is to bring these games to more fans on broadcast television with unprecedented promotion and visibility for Thursday Night Football on CBS,” Goodell said in a statement.

The 2014 NFL schedule will likely be released in mid-to-late April.

I’m not a big fan of Thursday night football! I think early in the season it should be played just on Sunday and Monday night! But from week 9-17 you should have two to three games on Saturday night!! I only like Thursday night games on thanksgiving! And you should always keep to tradition with Detroit and Dallas and the late game on thanksgiving!! I’m a die hard Eagles fan!!! I’ll I know is the NFL kicks ass!!!

Legal issues prevent Saturday night games from being played prior to week 15 or so.

Yes, it’s literally against federal law for the NFL to schedule games on Friday or Saturday during high school and college football season. That’s part of the trade-off for being antitrust-exempt.

Considering how successful CBS is on Thursday nights with their comedies, this is a shock they are doing this. What about the the kickoff and Thanksgiving games on NBC?

I believe those games are part of the Sunday Night Football package even though they are played on Thursday.

What’s worse is having to endure Captain Obvious (aka Phil Simms) sometimes twice a week adding nothing to the broadcast. Jim Nantz is very good if you ask me.

I liked the nfl network announcing crew from last year better. Anyways, one suggestion for Thursday Night games to reduce somewhat the effect on players for short week:
1) Schedule where both teams are coming off a bye
2) If not coming off bye schedule teams against close distance opponents. I know all teams
have to play once on Thursday so have their thursday game against a close opponent.

I like the move just not Phil Simms….munchys in wayne has the best food