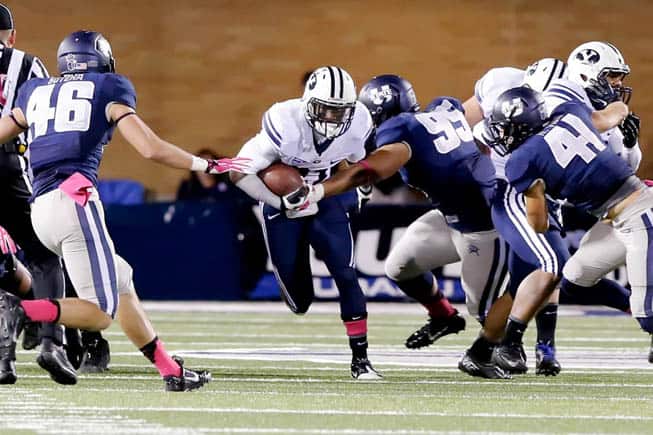 The BYU Cougars and the Utah State Aggies have added games in 2017 and 2018 to their existing football series, both schools announced today.

BYU will travel to face Utah State at Romney Stadium in Logan on Friday, Sept. 29, 2017. The Cougars will then host the Aggies at LaVell Edwards Stadium in Provo on Friday, Oct. 5, 2018.

“I appreciate the working relationship I have with Scott Barnes at Utah State,” said BYU director of athletics Tom Holmoe. “Scott has done an outstanding job at USU and is great to work with. We value the longstanding in-state rivalry with Utah State and look forward to these future games.”

“We are excited to continue our home and home series with BYU long-term,” said Utah State Director of Athletics Scott Barnes. “This rivalry is important to both institutions and the state of Utah.”

BYU now has eight games tentatively scheduled for the 2017 season and seven in 2018. Some those opponents include Arizona, Boise State, California, Utah, and Wisconsin.

The two games against BYU in 2017 and 2018 are the first announced for Utah State for both seasons.

BYU has won 12 of the last 13 against Utah State, and most of those wins have been blowouts. I’m surprised BYU would continue to schedule 1-and-1s with the Aggies.

LOL You mean the team who lost their Heisman candidate QB in the first quarter this season. And ybu didnt even lead the series until 1992 so…

1 and 1’s are not predicated on win/loss but on multiple factors in part: payout, logistics, rivalry vs. non-rivalry, recruiting, fan base, etc.

Ok, little brother syndrome, yes, Utah St has made this more of a challenge the past two years but I’m still not calling it a rivalry. It’s only a rivalry if both teams are good, year in and year out. Also, I’m not sure your Heisman hopes would have lasted after a loss to Utah. Do ya think Lynch at NIU would still be in the hunt if he had a lost to Iowa at the beginning of the year? As much as I like Utah St. and watching their program grow the past couple of years, BYU and Utah shouldn’t have a problem beating them on the recruiting game for years to come. If it is a rivalry, it’s one sided.

nice to see all the Beehive State love…hate

@nick screw you and all of the classless douchbags in logan

If record is how it was determined then Boise State would have been looking for 2 for 1s from BYU. This year was the first time ever BYU has beat them.

1st out of 4 tries to put that statement into perspective, and 2 of those losses were on the blue turf by as little as a game can be lost by.

So should I understand that BYU, who is now is in a perpetual struggle to fill it’s schdule, and who needs an annual Friday game the weekend of conference has some fans who feel the need to insult the Aggies when they accommodate. Absolutely typical. Perhaps the Aggies should rethink the value of this series to them.

The Aggie fans don’t want to play them, but for some reason our AD keeps compromising and they always get a better deal. Like in basketball for some reason we have to play a “neutral game” 30 minutes from provo and 90 minutes from Logan. And somehow the Cougars and Utes always find a way to get out of coming to Logan.

Energy Solutions Arena – basketball facility. But that is a different conversation about an in-state bball tourney that USU doesn’t really like due to travel.

I think the turning point for USU football in this series had to do with their change from Utah State Agricultural College to Utah State University in 1957. Prior to that USU dominated BYU at a 2-1 clip (19-10-3). But since then, USU has lost at a 2-1 clip (15-36).

They are all good teams. Who cares. But just to help out BYU, check out the “Worth Noting” section of this catalog:
http://byucougars.com/files/2014_byu_spring_apr_21_0.pdf