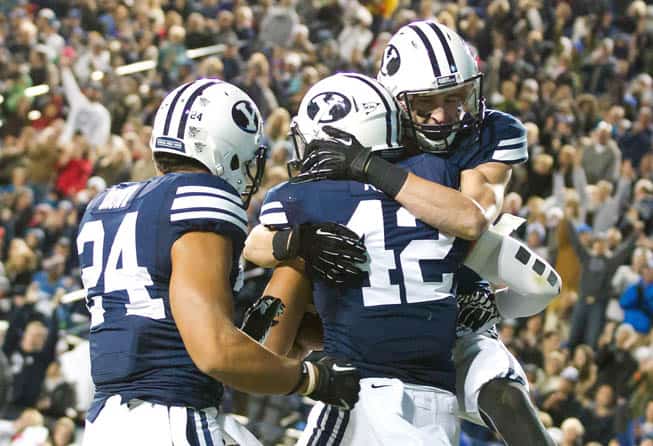 BYU and Stanford will play a four-game, home-and-home series. The Cougars will travel to face the Cardinal at Stanford Stadium on Nov. 28, 2020 and again on Nov. 26, 2022. Both of those games will be played over Thanksgiving weekend.

BYU has also announced the renewal of their heated rivalry with the Hawaii Rainbow Warriors. BYU will travel to face Hawaii at Aloha Stadium on Nov. 25, 2017 and will then host Hawaii in Provo on Nov. 17, 2018.

BYU and Hawaii were previously scheduled to meet in 2013 and 2014, but the games were postponed due to the Mountain West Conference expanding to 12 teams and creating a championship game.

The Cougars lead the overall series against the Rainbow Warriors 21-8 and have won the last three meetings dating back to 2002. In their most recent match-up in 2012, BYU crushed Hawaii 47-0.

BYU also announced an addition to their 2014 football schedule. The Savannah State Tigers of the FCS will visit Provo on Nov. 22, 2014.

The Cougars now have 13 games on their 2014 slate, so obviously one of those games has been or will be postponed or canceled. There have been rumors indicating Southern Miss has been trying to adjust or completely back out of their 2014-15 series with BYU.

So does this mean the Southern Miss game is gone from BYU’s schedule? My guess is Southern Miss ends up going to play @ Arizona State for some cash on that 11/8 date that Notre Dame is buying out to get down to 12 games.

We are currently at 13 games for 2014 now, and no away Hawaii game so something has to go

Notre Dame already confirmed they are playing at Arizona State in 2014.

Southern Miss is the game that is rumored to be dropped from BYU’s schedule in 2014. However, the cancellation has not been made official by either school yet.

Rice may be more likely for Notre Dame to bump, they were unsuccessful at bullying ASU

I think Rice is the only candidate left.

Out of the two home games they could drop in November, USM makes the sense. However, I am hoping we don’t have to bring them to Provo in 2015. I’d way rather see a bigger team on the home schedule. As of now, all our good games in 15 are away.