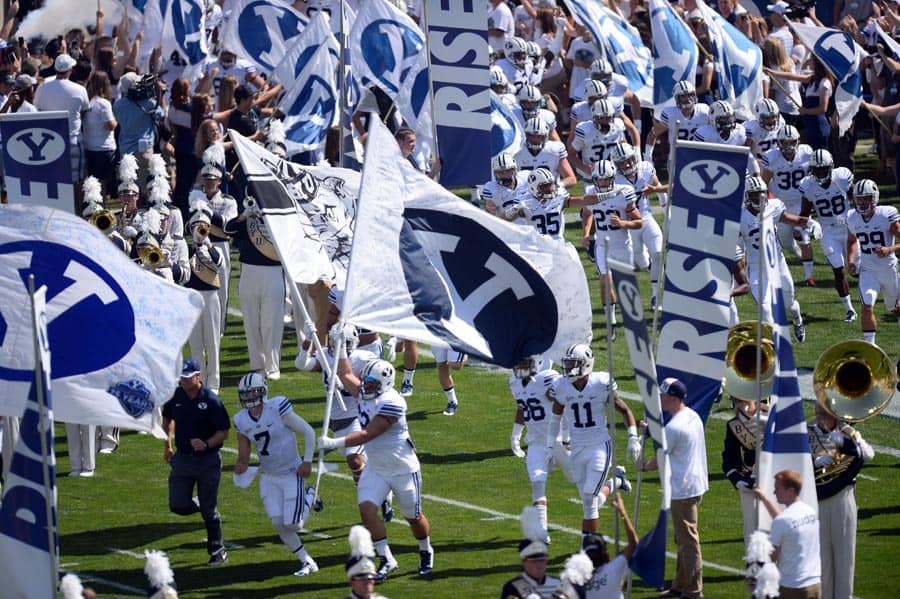 The BYU Cougars have officially announced their 2015 football schedule and their bowl tie-ins for both the 2015 and 2019 seasons.

“This is a very unique schedule. It includes road games at three of the more storied college football stadiums in the country,” said BYU Director of Athletics Tom Holmoe. “We enjoy playing in different regions of the country and traveling to places we’ve never been. We also like bringing teams to Edwards Stadium that have never played in Provo. This schedule is full of these types of games. It should be an exciting year for our football program and our fans.”

BYU opens the 2015 season at the Nebraska Cornhuskers on Sept. 5. The following week, the Cougars entertain Boise State in their home-opener at LaVell Edwards Stadium in Provo on Sept. 12 (ESPN or ESPN2).

The Cougars then embark on road trip at two consecutive historic programs — at UCLA on Sept. 19 and at Michigan on Sept. 26.

BYU also announced today their bowl tie-in for the 2015 season. The Cougars will play in either the Royal Purple Las Vegas Bowl or the Hawaii Bowl. Whichever of those two they don’t play in this season, they will play in that bowl after the 2019 season.

“We are grateful for the opportunity to participate in these two bowl games,” said Holmoe. “We look forward to returning to Las Vegas and Honolulu. We are fortunate to have a large fan base in both areas and it will be great to renew the many longtime friendships we’ve enjoyed in these two cities.”

I love being in the Vegas bowl. If we are going to a bowl we used to go to, it might as well be in one that is only 6 hours away. It makes for an easy trip. And who doesn’t love having an excuse to stop all family activities on Christmas Eve to watch a bowl game.
Both of these bowls have historically had Mt. West ties which I am not crazy about. And honestly, I don’t think Mt. West teams would be too thrilled about their conference winner (granted they aren’t going to a bigger bowl) playing BYU instead of a Pac 12 team. However, I’m done having expectations that BYU can schedule bowls against P5 conferences. Since independence they’ll only played in one bowl with a P5 school.

BYU is taking the spot the MWC is vacating to take part in the Armed Forces Bowl:
http://www.mercurynews.com/sports/ci_24331875/mountain-west-conference-could-have-seven-teams-bowl “During two years of the six-year cycle, Mountain West teams will play in the Armed Forces Bowl in Fort Worth, Texas. During one of those years, the conference will vacate its spot in the Las Vegas Bowl and it will vacate the Hawaii Bowl in the other.” So they will face the Pac12 in the LV and C-USA in Hawaii.

All MTN west teams better enjoy whatever bowl they get cause in a few years when we go to 4 power conferences the rest of the lower tear teams will lose a lot of publicity.

Thank you Rick! Playing a Pac 12 team in Vegas will be great. Just like old times.
Hey, maybe that could be our Utah matchup for 2015. That would be hilarious.

“Entertain” is commonly used as an alternative to “host.” We don’t play favorites or “classlessly disrespect” anyone here.

Matthew that is one of the most unintentionally hilarious posts I’ve ever seen. The best part is I can literally see you in my mind red faced with anger doggedly typing away at your comment…but literally having no idea you completely misinterpreted the fairly common saying which stimulated your anger.

Matthew, I mean this in the kindest way possible: Get over yourself.

Ease off Matthew with your hypersensitive over reaction to nothing! Entertain, Host, Welcome, it is all the same. Find something meaningful to get your tit in a ringer over.

Boise State fans are notorious for being ultra-defensive.

Getting out of September 1-3 would be huge. Because based on passed trends, they will fall to at least one of theses teams in October and November that we don’t expect to lose to (and Missouri). So, getting at least one of those in the win column in September is a must.

By passed, I assume you mean past rather than referring to the fact BYU is know for its passing offense.

I see 8-4 as a possibility. Michigan and Boise State are not the teams they used to be, Nebraska should be close depending on which Nebraska team shows up. Cincinnati and East Carolina should be close, but I don’t see BYU beating UCLA, Missouri, or Utah State. Finally, what is with scheduling Wagner, a college with an enrollment of 2,400. I had to look on the Internet to find it. I hope it is not a home and home series, given their stadium holds a whopping 3,300 fans.

Haha someone is a little sensitive. This obviously isn’t meant as disrespect, people today choose to be offended by the littlest things.

Having Nebraska, Michigan, UCLA, and Missouri away suck but if they beat them, it helps SOS. Their home schedule doesn’t look like sell outs.

I hope BYU wins all there games till they get to KC, we’re going to stomp them!

I don’t know, Mizzou is going to have a rough start to their 2015 season playing the Southeast Missouri RedHawks and the Arkansas State Red Wolves. And I thought BYU playing Wagner was lame. I would be shocked if Missouri did not have 3 loses by the time they play BYU. Oh, and I hate K-State too. Go Buckeyes!