Breaking down Week 9 of the 2018 college football schedule 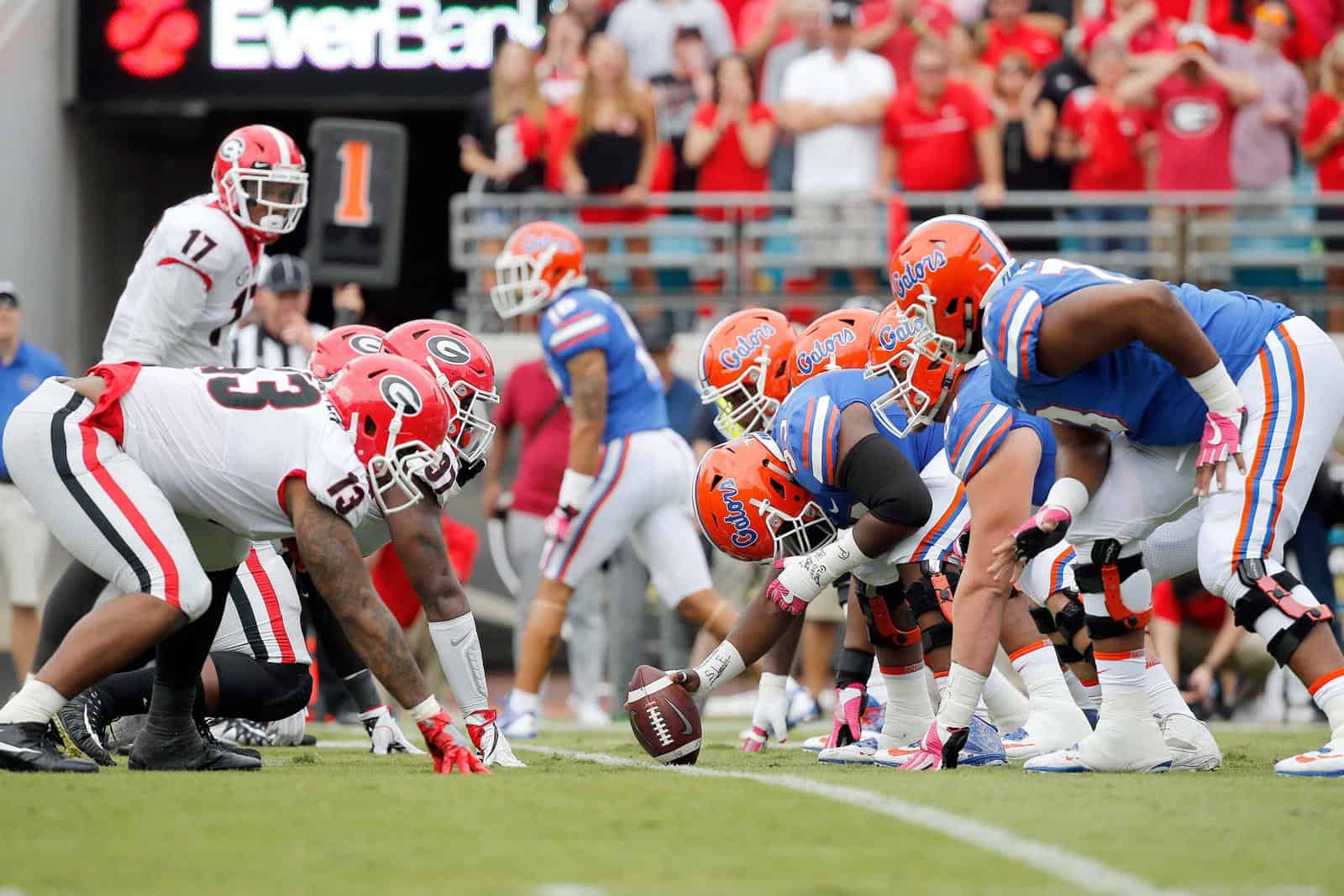 Week 9 starts off with a bang – a whopping 11 games on the college football schedule before we even get to Saturday.

Saturday kicks off early with (2) Clemson trying to survive at unranked Florida State at Noon on ABC. The mid-afternoon time slot offers a trio of quality options, all at 3:30pm EST: (9) Florida vs. (7) Georgia on CBS, K-State at (8) Oklahoma on FOX, and (18) Iowa at (17) Penn State on ESPN.

Primetime also doesn’t disappoint. While (14) Washington State visits (24) Stanford and (16) Texas A&M is at Mississippi State, both at 7pm EST on the Pac-12 Network and ESPN respectively, don’t forget to switch over to the major networks an hour later at 8pm EST to see two Top Ten teams get tested under the lights. CBS has (3) Notre Dame at Navy and ABC has the call for (6) Texas at Oklahoma State.

Week 9 is also the final week of play before the first CFB Playoff Rankings come out on Tuesday, Oct. 30. This first set of rankings is crucial because it establishes which four teams won’t have to do anything, presumably, but win out to remain in the bracket. For the rest of the field, it will be a case of waiting for a top four team to fall or winning so impressively that the committee has no choice but to leapfrog one team over another.

After shocking then No. 2 Ohio State on Saturday night, Purdue visits East Lansing this weekend where it hasn’t won since 2006. Before automatically assuming the Spartans’ always stingy defense will shut down the Boilermaker’s potent passing attack – ranked No. 6 nationally – consider this: Michigan State is currently ranked No. 117 vs. the pass. Nationally. It’s the lowest mark for Mark Dantonio’s program since the 2009 squad which, ranked No. 112 in passing defense, finished the season 6-7.

Stanford is another old-school, gritty team, like Michigan State, that we expect to consistently have a potent defense. Instead, the 2018 edition of the Cardinal D is ranked No. 61 vs. the run and No. 98 vs. the pass. It’s a fortunate scenario for (14) Washington State, which unsurprisingly is ranked No. 1 in the FBS in passing offense. The Cougars’ attack is also the only unit in the country averaging 400-plus yards through the air. Keep an eye on senior quarterback Gardner Minshew II (#16), he’s No. 1 in the nation in yards per game (392.1) and No. 2 in total yards (2,745).

Our “don’t judge a book by it’s cover” selection for Week 9 tune in to this one, or check the stats on Sunday morning, to see if UAB can add to it’s growing pile of defensive accolades. The Blazers are ranked No. 2 in the country in sacks with a whopping 27 – that’s one more than both (1) Alabama and (11) Ohio State which are tied at 26 apiece. Enter in UTEP, ranked No. 123 in sacks allowed, and you get the picture. Only five teams in the country have given up more sacks than the Miners’ 26. Players to watch include senior defensive lineman Jamell Garcia-Williams (#99), his 6.5 sacks thus far ranks No. 18 nationally and No. 4 in Conference USA.

Established in 2015 The Belt is just that, a championship belt complete with football bling. It may be the best swag in all of college football. The two schools are located a mere 175-miles apart in southern Alabama. The Jaguars have worn the belt twice vs. the Trojans’ single wearing.

Awarded to the winner of the “Border War” since 1968, the Bronze Boot is, as advertised, a bronzed jump boot formerly worn by Colorado State alum and Vietnam veteran Jeff Romero, Sr. In one of the coolest traditions associated with a rivalry game, the two schools’ ROTC detachments meet at the Wyoming/Colorado border each year after the contest with the game ball, the school scheduled to host the next meeting running the ball back to its stadium. The Cowboys have captured the Boot 26 times vs. the Rams’ 24.

The Golden Screwdriver – Hawaii at Fresno State – series started in 1938 – Fresno State leads 27-22-1 and has won six of the last seven.

Established in 2009 by the student governments of both schools, the Okefenokee is a 10-foot long oar, carved from a 1,000-year old cypress tree from the Okefenokee Swamp.  Covering nearly 700-square miles, the swamp straddles the Florida-Georgia state line. The Gators have paddled home with the oar five times vs. the Bulldogs’ four.

First awarded in 2011, Rip Miller was a member of Notre Dame’s Seven Mules, the line that blocked for the legendary Four Horseman from 1922-24. Miller went on serve as an assistant at Navy from 1925-30, taking over the head job in 1931. As a coach, he was part of the effort to establish an annual game between Navy and Notre Dame. Miller finished his career as an assistant athletic director in Annapolis, a post he held from 1948-74. The Irish have won the prize honoring his legacy six times vs. the Midshipmen’s once.

Illinois’ visit to Maryland on Saturday afternoon marks the first time the two programs have ever met on the gridiron. After the dust settles in College Park, the Terrapins, which jumped ship from the ACC to the Big Ten in 2014, will have finally played every member of its new conference home.

It also means that only one in-conference matchup among the Power 5 leagues will have yet to played – Wake Forest and Pittsburgh. The Panthers – which moved from the Big East to the ACC in 2013 – are slated to visit the Demon Deacons on Saturday, Nov. 17 in Winston-Salem.

Combined, the two matchups mark a significant “settling” milestone in the aftermath of the epic wave of conference realignment from 2010 to 2014.

Nice to see UAB doing so well after coming back to football & this soon, did not know their defense was so good.
Clemson is going to put on a clinic with FSU come Saturday, the Seminoles are awful & I am not trying to be mean, they just are.
The Golden Screwdriver sounds like a drink, I did not know it had anything to do with actual screws.
Interesting stuff.