Breaking down Week 2 of the 2020 college football schedule 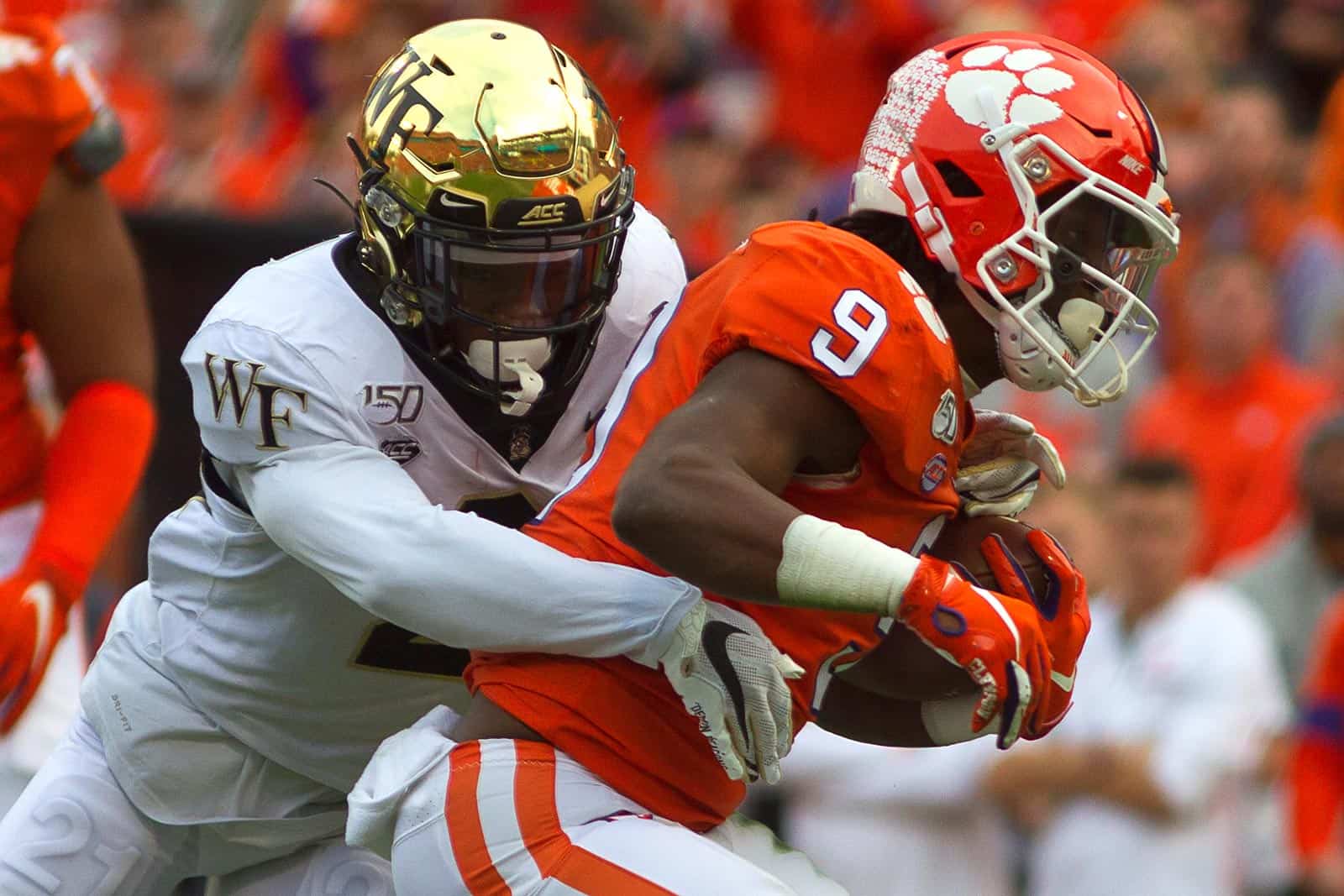 Though Week 2 of the 2020 college football schedule serves up what might seem like an underwhelming 20 games, it’s 11 more contests than were on offer in Week 1. If that weren’t enough, 18 Power 5 members and six ranked teams are in action this week, both up from the zero we didn’t enjoy last week.

Of the 20 total contests, six feature FBS vs. FCS matchups while the balance (14) are FBS vs. FBS pairings. A precious four games – all of which are technically ACC league contests – are between Power 5 members. Nine – or 45% – of the matchups were initially scheduled to be played sometime during 2020 (of these only three will occur on the precise date they were originally booked for) while 11 are new pairings, conjured up in the wave of schedule revisions.

The action kicks off on Thursday night when UAB visits Miami Fla. for the first time in history at 8pm EST on the ACC network.

Saturday is home to 19 games. In the early time slot tune in to see the first Power 5 matchup of the season – Syracuse at (18) North Carolina at Noon EST on the ACC Network (for more information on this one, check out the Perfect Storms section below). Also worth considering at high noon are Louisiana at (23) Iowa State on ESPN (featuring an under the radar strength vs. strength matchup between the Cyclones’ No. 11 passing offense from a year ago vs. the Ragin Cajuns’ No. 21 ranked secondary) and Charlotte at App State on ESPN 2 (which pits the Mountaineers’ powerful offense – No. 9 in scoring in 2019 – against the 49ers’ generous D, ranked No. 103 in scoring last year).

The midafternoon is headlined by Duke at (10) Notre Dame at 2:30pm EST on NBC and Georgia Tech at Florida State at 3:30pm EST over on ABC.

In primetime, all eyes will be on (1) Clemson’s powerful offense vs. Wake Forest’s defense – which struggled to a No. 101 rank vs. the pass last year – at 7:30pm EST on ABC. If you’re up a little later, Les Miles’ kicks off his second campaign at Kansas by hosting Coastal Carolina at 10pm EST on FS1.

North Carolina welcomes back a whopping ten starters from an offense that finished 2019 ranked No. 30 in scoring, No. 38 in rushing yards per game and No. 25 in passing. Included are starting QB sophomore Sam Howell (#7) (who finished No. 10 in the FBS in passer rating as a freshman last season), the top nine receivers, the top two rushers and four members of the starting offensive line. According to Phil Steele’s calculations, it amounts to the return of 95.6% of the yard getters from last season – the second most in the entire FBS. Look for the unit to shine brightly in its opener vs. Syracuse, which returns a mere four starters to a defense that finished last year ranked No. 88 in scoring, No. 109 vs. the run and No. 110 vs. the pass. Only one member of the Orange’s front seven is back and six of the eight top tacklers are gone. Gird your loins to get on the Mack Brown bandwagon early.

Only two defenses in the entire FBS were more generous vs. the run than ULM was in 2019, coughing up, on average, 252.7 yards per game. The season-low came vs. Georgia State, which hung up 414 ground yards on the Warhawks’ D. While ULM does welcome back eight starters on defense in 2020, two of the top four tacklers are gone as are three members of the starting front seven. The strongest unit ought to be the secondary which comes back intact. Coming into 2019, the Warhawks brought seven defensive starters back and still finished the season ranked No. 127 nationally in scoring. Throw in the breaking news of Mike Collins’ – the DC in Monroe since 2016 – sudden resignation and the matchup with run-centric Army (which finished last season ranked No. 3 in the FBS in rushing offense) sends a shiver up the spine. The Black Knights’ triple-option attack hung up 340 rushing yards and five rushing TDs in its 42-0 rout of Middle Tennessee last weekend. Keep an eye on senior RB Sandon McCoy (#3) who scored three TDs in the Week 1 win and true freshman RB Tyrell Robinson (#21) who averaged 10.44 yards per carry in his collegiate debut.

Expect (14) Texas to start with a bang vs. a UTEP defense that finished No. 119 in scoring and No. 108 vs. the run in 2019. Only one team in the entire FBS – Akron – was worse in third down percentage allowed last season than the Miners, with a dismal rate of 52.3%. But UTEP has the entire defense back, right? No, indeed – it welcomes back a mere five defensive starters from last season and loses the top four tacklers. Cue up the Longhorns, which welcome seven starters back to an offense that finished last season ranked No. 17 nationally in scoring, No. 48 in rushing and No. 20 in passing. Included are the starting QB senior Sam Ehlinger (#11) (No. 13 in the FBS in passing yards per game in 2019), the top four rushers and three members of the starting offensive line. Tune in Sunday morning for a highlight reel featuring multiple Longhorns with Heisman aspirations.

Georgia Tech’s visit to Florida State this Saturday (3:30pm EST, ABC), marks the first time since 2015 that the two have met on the gridiron. The unranked Yellow Jackets upset the then (9) Seminoles 22-16 in Atlanta that season. The last time FSU beat Georgia Tech was the year before, in 2014, when as the No. 2 team in the land it nipped the then (12) Yellow Jackets 37-35 in the ACC title game. It also marked the final time not only that the Noles’ won a conference crown, but the last time they’ve represented the ACC Atlantic in the title game. Since then, it’s five-straight division – and – conference crowns for Clemson.

It makes 2014, and the last win over Georgia Tech, the final moments of ACC glory before a slow decline for FSU.

This is like watching spring training in baseball….yeah,they are playing but it doesn’t mean squat with so many teams NOT playing.

I agree @Gator Hater it’s hard to telll right now which is the better decision- to play or not to play? That seems to be the question. As you mentioned, only time will tell. In the meantime the experiment continues…

It is interesting that the states with the highest rates of Covid are the SEC, ACC and Big 12 teams that have infection rates 2-5 times higher than Pac12 teams that are not playing. You can call the Pac12 wimps or you can call many southern states more interested in the holy grail of college football than potential health risks to the players. It is ironic that many states from the east, midwest and pacific coast which are generally pro choice for women are more concerned about the potential health effects on the players and potential fans than the “pro life” southern states who damn the potential health issues and more interested in playing and taking more risk. Who are the real pro lifers?

Let’s not delve into politics please.