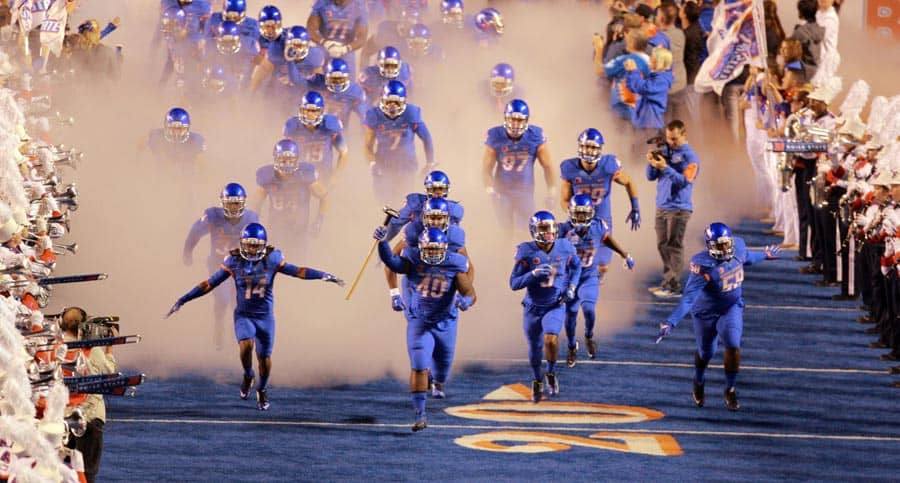 The Boise State Broncos and the Marshall Thundering Herd have scheduled a home-and-home football series for 2019 and 2020, the two schools have announced.

The series was initially reported by the Charleston Gazette-Mail.

In the first game of the series, Boise State will host Marshall at Albertson’s Stadium in Boise on Sept. 21, 2019. The Broncos will then travel to face the Thundering Herd at Joan C. Edwards Stadium in Huntington on Oct. 3, 2020.

Boise State and Marshall’s first and only meeting came back in 1994 in the Division I-AA Playoffs. Boise State defeated Marshall 28-24 in a semifinal game in Boise.

The Broncos now have three non-conference games scheduled for both the 2019 and 2020 seasons. In 2019, the Broncos also visit Florida State and BYU, while in 2020 they host the same two teams.

In 2020, the Thundering Herd have four non-conference games lined up. In addition to the home game vs. Boise State, Marshall is set to visit East Carolina and Ohio and host Pittsburgh.

“Boise State has had one of the top programs in college football, not just the Group of Five or as a so-called ‘BCS buster’ in the recent past,” Marshall Athletic Director Mike Hamrick said. “They’re at the top of the Mountain West. We’re at the top of Conference USA.

“Our goal is to play for the College Football Playoff access bowl berth that Boise gained last year, that Group of Five spot. The only way you can do that is to win your conference title and then play against and beat the best teams from the other leagues. That’s how you get there.”

Great to see that Boise State & Marshall have scheduled a home and home series against each other. Those games should be a lot fun to watch.

Boise State did a great job a few years ago getting the likes of Power 5 teams Florida State, Oklahoma State and Michigan State to agree to home & home series. Since then the it has been slim pickings. They are saddled with 2 dreadful southern rejects in Troy (losers to even Idaho) and Louisiana /Lafayette @ home along with AAC bottom dweller UConn and ACC weakling Virginia. In addition UTEP and Rice were the latest addition to their less than stellar non league schedule in future years. They still have surprising Washington State on the schedule for the next 2 seasons and traditional PAC 12 doormat Oregon State next year.

It is a challenge to get teams to come to Boise to play in such a tiny stadium. Marshall does represent an improvement over Idaho State. Let us hope that with their weak Mountain West schedule that no more FCS teams are slated for the future.

I agree. I love that we play BYU annually, but we need to get at least two more Power Five schools on the schedule each year.

Doubt you’ll reply or even see this as it’s like 8 months past when you posted lol.
Only way Boise State is going to get two power 5 teams is if they decide to do more 1 and done games. Boise State has lost a little bit of it’s lust in terms of National perception but a couple good years could easily bring that back. It may be a scenario where they schedule a lot of home and homes with Washington State and Oregon State. I’d also look at going for home and homes with Colorado and Utah.

For me the key I would like to see is a lot of games against either the Big 12 or PAC-12 since those are the two conferences that one day will send Boise State an invite to their conference.

Great to see these two schedule each other. Should be some very good games.