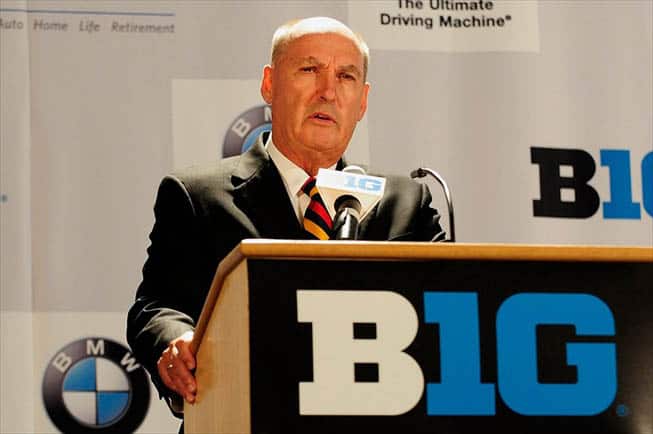 The Big Ten has officially announced new East and West football divisions for 2014 and will move to a nine-game conference football schedule beginning with the 2016 season.

The divisions are geographically split and will look very different than the outgoing Legends and Leaders setup. Michigan and Michigan State will be together in the East, and they will be joined by Indiana, Ohio State, and Penn State. Also joining the East are newcomers Maryland from the ACC and Rutgers from the Big East.

The West Division is highlighted by Nebraska and Wisconsin and looks to be the weaker of the two divisions. Here is a look at the new lineups for the Big Ten East and West:

“Big Ten directors of athletics concluded four months of study and deliberation with unanimous approval of a future football structure that preserved rivalries and created divisions based on their primary principle of East/West geography,” said Big Ten Commissioner James E. Delany. “The directors of athletics also relied on the results of a fan survey commissioned by BTN last December to arrive at their recommendation, which is consistent with the public sentiment expressed in the poll.”

The new alignment places virtually all traditional rivalries in the same division. The lone exception is Indiana-Purdue, which will be a protected cross-division rivalry each season.

More on the new scheduling format from the Big Ten release:

With the return to a nine-game football schedule, the Big Ten joins the Big 12 and Pac-12 as the only three conferences to employ that format. The ACC previously announced that they were moving to a nine-game schedule in 2014, but back-pedaled after Notre Dame agreed to play five ACC games per season.

Who will Maryland’s cross rival be from the west?

Agreed. If the Big Ten would have placed Michigan State in the West Division, there would have been more equal competition between both divisions.

Just so long as Wisconsin can keep pulling off upsets in the championship game… well, that’s the only way I see parity in the two divisions.

I’m glad the Big Ten (B1G) is giving up on the “Leaders” and “Legends” divisional format in favor of the more geographical division names of East and West. Now, my question is, why didn’t they do this two years ago, when Nebraska joined the conference?

I’m for a Rutgers-Maryland rivalry. Makes sense to me.