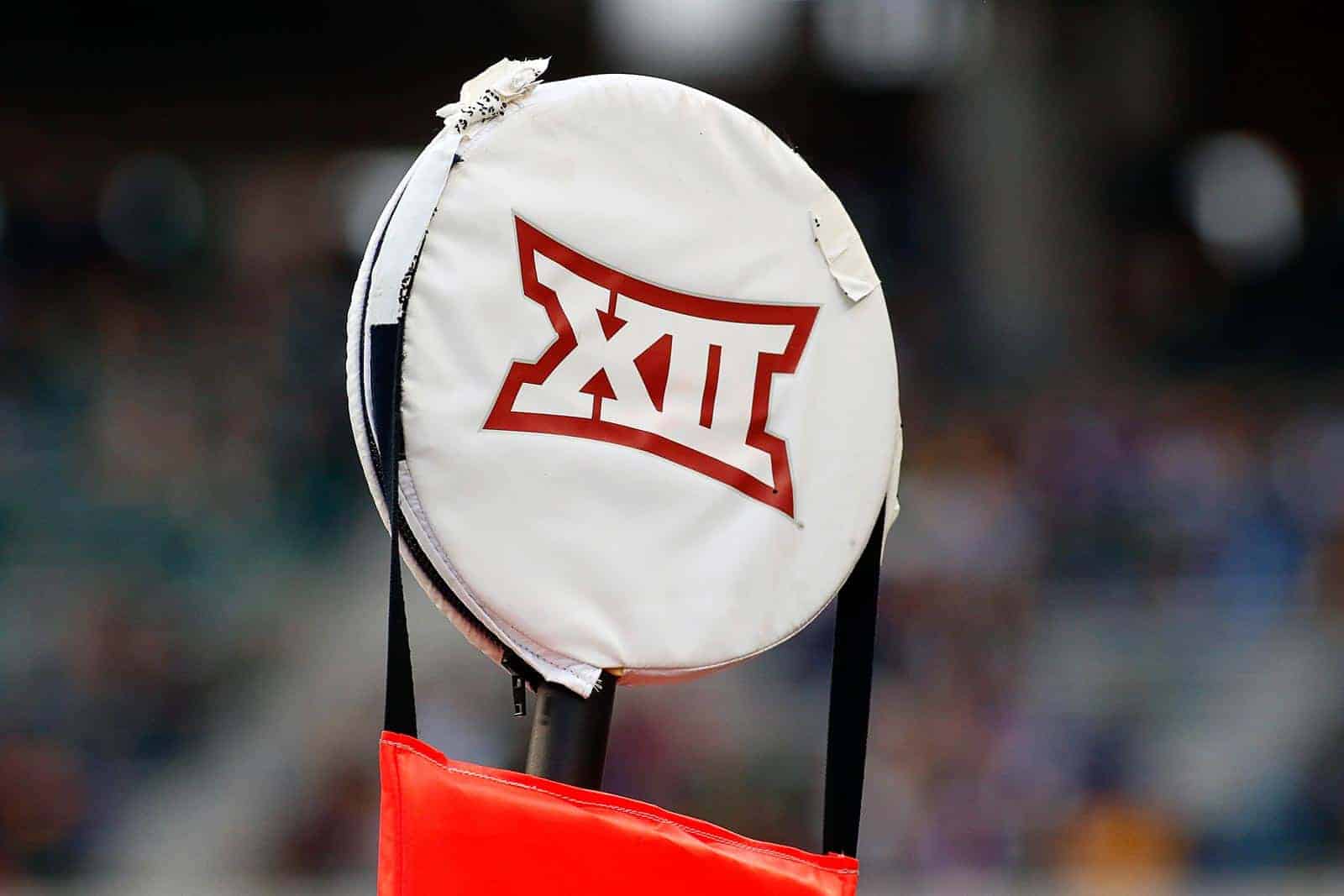 The schools will begin play in the expanded league at the start of the 2023 campaign, Brett McMurphy of The Action Network reports.

The Big 12 reported the moves becoming official as a unanimous action:

Today’s actions were in accordance with Big 12 Conference Bylaw 1.5.2.b.3 requiring an affirmative vote of a supermajority of Directors, and was approved unanimously by the eight continuing members.

Here's AAC commissioner Mike Aresco, after three of his schools got poached by the Big 12: pic.twitter.com/HoKFcDmBRf

I know this is really only about football, but the B12 got some pretty good Mens and Women’s Basketball teams as well.

OK – So it’s a Group of 5 conference w/o Texas and OU still.

They’ll still be better than the Pac-12 most likely.

You don’t think they’d have 2 divisions even if they were just a 12 member conference?

But yeah, how to divvy up the divisions gets more complicated if you have seasons with Texas & Oklahoma PLUS this group. There’s still a chance Texas & Oklahoma exit early, but… without Texas & OU I think the divisions kind of take care of themselves. You figure, unless they’re doing a complex “permanent cross-divisional rival” schedule, that WVU and Cincy should be in a division together, that KSU, ISU, and KU want to be in a division together (maybe with Oklahoma State, but they’ve had some practice being separated from them in the old Big 12 south). But also, it seems unhelpful to try to put UCF and BYU in the same division, so…

… and that would actually divide up well strength-wise too this year.

If you have seasons that include Texas and Oklahoma with the newcomers, I’d be tempted to have Houston in the east for those seasons and Texas/OU in the west, but that doesn’t help the conference balance much. It just maintains the teams that HAVE TO play each other.

Fun fact, of all 14 teams, only 2 have never played in either a BCS or New Years 6 bowl game: Texas Tech (who drew the short straw that year there was a 3 way tie in the Big 12 south or they could have made one) and BYU. Everyone else (including Kansas!) has been to at least 1.

(I also believe that there are only 5 other teams that have made a NY6 bowl that will not be in Power 5 conferences… acknowledging that the Big 12 may or may not be a Power 5 conference next time that is negotiated, but at least briefly it still will be…)

So, while UT & OU stay…
.
E: WV, UC, UCF, UH, ISU, KU, KSU
W: UT, OU, TT, BYU, BU, Ok State, TCU
.
Use it for scheduling, and use top 2 by %? Frankly based on current team strengths they’re not that far different from each other. Iowa State, Cincinnati, Central Florida, West Virginia, are all top 25 or top 50.
.
This also keeps the three from the AAC together until Texas and Oklahoma leave. Then Houston can shift to the West.

If Texas and OU stay long enough for there to be a 14 team B12, just put the TX and OK schools in one division and the rest in the other one. Yes, it would be very unbalanced in both travel and strength, but it would be for only a couple years at most.

@Jeff,
I enjoyed your research on NY6, BCS Game History,

They won’t have to reschedule many because there’s an out clause if they join a conference.

It is probably the best among the Hexades and clearly no longer a member of the Gang of 4.

Cut out that Hexade, Hexagon, Hexhead nonsense. It’s still A5 or P5, and G5.

I don’t think autonomous means what you think it means.

Even Autonomous Conferences are “Built not Born”.

I don’t know the reason. Whatever it was that didn’t move the Original Big 12 to be a proactive, moving, shaking Conference in 2010-11 when cornerstone members Nebraska & TAMU left followed by MO & CO, the remaining 8 schools are now working, building, being premeditated then acting & not being acted upon, finally.

“Take no status for granted”. Be strategic, tactical, & be prepared for Blitzkrieg offense when that’s the successful solution, as well as a long term multifaceted defense.

There’s not much the B12 could have done when it was so top-heavy with OU and Texas. Adding some combo of BYU/Cincy/UCF/Houston earlier wouldn’t have convinced those 2 to have stayed. In fact, I believe those 2 were against additions.

There was a moment when the Big 12 looked like it needed to make a move, and the ACC looked vulnerable. There was tension between the basketball schools in the ACC and their football-focused counterparts, and there were rumors that the Big 10 was out to poach teams. And the tv deals weren’t looking so hot, while the Big 12 was doing really well with theirs for a demolished conference. Miami was nervous they’d be left out in the cold. And that was when the Big 12 should have been talking to them. “Miami…?!?” you ask? Why Miami? Why a team that was dealing with investigations and infractions at the time, and who was a shadow of its former self? Because the ACC rivalries didn’t really want to break up. If you’re get Miami’s ear, you get FSU’s. If you get FSU’s you get Clemson’s. You end up with those 3, plus Georgia Tech? And then you’re in a great position. You’re fine sitting at 14, even though the divisions line up funny. You know you plan to go to 16 eventually. But the big fish is out there to try to grab first. Notre Dame cares about its non-football sports and wants them in a power conference. But if the ACC isn’t assuring an option anymore… the Big 10 and SEC would have zero interest in them unless they got football as full membership anyway. But Notre Dame showed no interest in sticking to the Big 10 footprint. They wanted to be able to play games all over the country. And suddenly you are a conference with a few nearby-ish opponents in ISU and WVU, but also in Texas, Florida, Georgia, etc. And they need to go SOMEWHERE for their non-football sports. You could even sweeten the deal by letting them choose team #16. Navy for their rivalry? Sure. Louisville for a nearby game? Sure. Pitt? Virginia Tech? They choose and the Big 12 offers.

But then the ACC got it together. They got their hybrid deal with Notre Dame and stabilized the conference. And the moment was gone.

The second the Big 12 showed just how committed they were to not being proactive, by adding teams or coming up with some alliance, I knew the conference was a holding pattern until it was opportune for some teams to leave. I think they did about as well as they could to add these 4 now… but that doesn’t change that they should have done more before.

I’m doubtful that the B12 really had a chance at Miami and FSU.

Remember that Miami decided to jump from the BE to the ACC despite the BE promising Miami the same payout because the ACC was a lot closer and thus better for travel costs for non-revenue sports. Same logic applies to FSU.
And sure, if you could get Clemson and GTech, then that makes it more palatable for the FL schools, but Clemson and GTech have strong ties to the NC schools.
And all these schools could see that the ACC was inherently more stable than the B12 because UNC, (due to the many ACC rivalries it has) is much more willing to hold the ACC together than Texas (who is always only out for Texas) was willing to hold the B12 together.

If you think the ACC didn’t think it was going to get pulled apart, then look at what happened to Maryland who had longer history with the NC schools than some I mentioned. I’m mot saying it was a long window, the ACC made moves to secure things, but there was a period where they were worried FSU might go SEC with Clemson and GA Tech and UVA were getting signals from the Big 10. A lot of the rest of the ACC would have been fine, but Miami knew they were a weak link at that time. And if you had a proactive conference offering to keep the southern ACC rivals together while making other big football moves, it would have been tempting if you were worried about more schools pulling Maryland moves. And I think the biggest point here is, it could have been a solid conference that could have named its price for the TV networks. The worst that would have happened is you get a couple targets and not the rest. But instead they never even attempted it, which means there wasn’t going to be any progress for the conference.