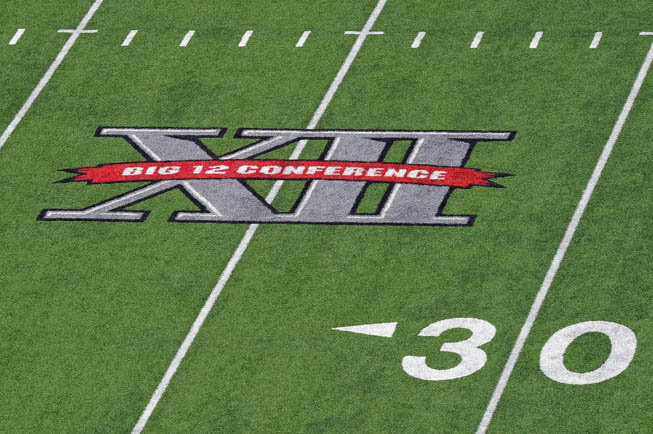 The first Big 12 Conference match-up is on Saturday, Sept. 7 when West Virginia travels to face Oklahoma. The game will be televised by FOX at 7 p.m. ET.

Listed below are the Big 12 games have been selected for television as of June 4:

Why is the ole miss texas game on the longhorn network? And besides I think ole miss is a really good team they are so good that they can be a 10 win team and texas on the other hand is back to their good old days in other words they are back to being top contenders in the big 12. And I really think the ole miss texas game should not be on the longhorn network because ole miss is a really good team in other words they are a 9 or 10 win team in my opinion and texas is a top contender in the big 12 in my opinion

Home team hold’s TV rights to the game being played, so they can choose what network they want. Most if not all the Big 12 teams don’t like the thought of UT having a network. Tech for example almost pulled out of a game at Texas State because LHN was the preferred network. They changed to ESPN 3 at the last minute. To keep from making anyone in the Big 12 mad, UT uses LHN for non-conference games.

It would great if we had our own Big 12 Network, for real we will be left behind without it; Instead UT egos rule the roost and get the whole enchilada as usual. Let’s get together for the good of the conference…. Come on folks, when are we going to do something for the greater good of the conference and stop taking marching orders from De Loss!
.

When UT &m ESPN started talking about a network, no one thought it would make $; it was for the exposure and eventually make $. They thought UT would have to pay at first. A&M was asked to be in on it and they didn’t want to have to pay. Later, when things changed, and UT got lots of $, A&M got mad and left, and the rest of the Big 12 is PO’d. I don’t blame anyone else not wanting to give UT the exposure, but don’t make it all about greed or UT intransigence. The UT network is what started the idea of conference networks for the Pac 12 and SEC.

If the Big 12 works out a network and the numbers are right, I would hope UT would fold into it- it would help everyone. UT may not want to do it now, but if LHN doesn’t get picked up by more of the major carriers soon, they may go for it.

Also, Notre Dame has had their own network with NBC doing almost of their games, but other schools don’t mind as much since when they play ND they’re on national tv, and ND had been an independent.

Texas is greedy as hell. More Big 12 teams should boycot the Longhorn network. No national exposure.

Hey Guys,
Fox Sports 1 gets the best Kick of Game of the Year for their first ever TV National College Game night with 2 time FCS National Champs NDSU Bison verses 2012 Big 12 Champs KSU! It’s going to be a great game to watch & why Bison love coming to FRisco TX in January will extend another win in Manhattan KS Aug 30th at 7:30pm. The Bison have similar stats like BAMA in many ways. Successful programs use the same formula’s. Discipled, talented, and super tough defensive teams.

Glad to see the RED RAIDERS playihg on TV every week!

Simply the way it should be………

If you want to blame someone put the blame where it belongs on ESPN think they could broadcase Texas high school on the Longhorn Network. If ESPN would have gone to any other school in Texas They would have taken the money too from ESPN. Espn did not do it’s homework. There is only two cable stations in Texas.

I’m just happy Football is finally here! Everything else will work itself out. GO OKLAHOMA STATE!! See you all at the BCS BOWL!

The worst thing about the longhorn network is most of the students who already can’t afford to attend the games now can’t afford to watch them on television. But they are still paying to attend the school because they want the education. It hardly seems fair they are spending $15,000) a year in tuition & fee’s for an education and can’t enjoy one of the perks of being a longhorn.