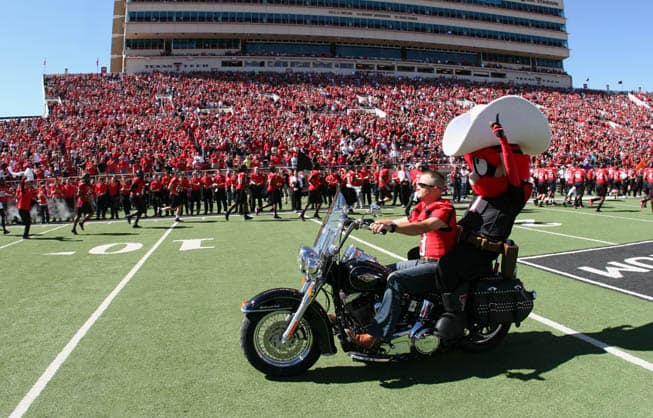 The Arkansas Razorbacks and the Texas Tech Red Raiders have scheduled a home-and-home football series for 2014 and 2015, both schools officially announced today.

In the first game of the series, Texas Tech will host Arkansas at Jones AT&T Field in Lubbock on Sept. 13, 2014. The Red Raiders will then travel to face the Razorbacks at Donald W. Reynolds Stadium in Fayetteville on Sept. 19, 2015 to completed the series.

Arkansas leads the overall series 28-7, but the two schools haven’t played since the Razorbacks joined the SEC in 1992. Prior to that, Arkansas and Texas Tech had met each season since 1957.

“The addition of Texas Tech gives us a quality non-conference opponent for the first two years when the world of college football changes with the playoffs in 2014,” Arkansas head coach Bret Bielema said. “We anticipate strength of schedule being a factor in deciding which teams are selected and feel adding Texas Tech to our already strong conference schedule puts us in a great position in that regard. There is a tremendous amount of excitement around our program, and this is a matchup our fans can look forward to.”

“We are thrilled to begin a home-and-home series with the University of Arkansas,” Kirby Hocutt, Texas Tech Director of Athletics said. “Texas Tech and Arkansas had many memorable games while conference foes in the Southwest Conference, so this should be very exciting for the fans. We feel like we will be placing ourselves in great position as we kickoff the College Football Playoff era in 2014, with a non-conference opponent the caliber of Arkansas and a challenging Big 12 schedule.”

The addition of Arkansas tentatively completes the 2014 non-conference schedule for Texas Tech. They open the season at home against Central Arkansas on Aug. 30 and later travel to face UTEP. In 2015, Texas Tech hosts the Miners and needs one additional game.

Perhaps the Hogs might consider scheduling a game against in state rival Arkansas State. I’m sure the football fans in the state would prefer that match up.

It’s great to schedule Tex Tech. B12 is always wayyyyyy overrated. In reality Tex Tech is not any better than a good FCS team but Arkansas would get a lot of recognition for beating Tex Tech.

Wow Neil … Actually Tech fans were thinking we couldn’t have picked a better SEC team. Although it will be an easy win for Tech, a win against a SEC team will at least APPEAR to be quality.

i think this is a great non-conference game