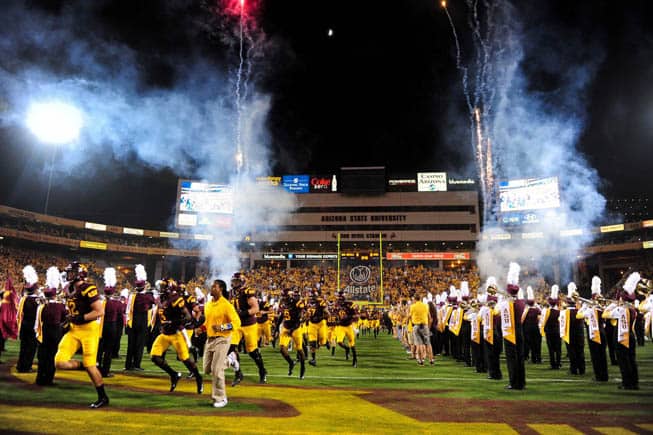 The Arizona State Sun Devils and the Michigan State Spartans have scheduled a home-and-home football series for 2018 and 2019, both schools announced this afternoon.

Arizona State will host the first game of the series at Sun Devil Stadium in Tempe on September 8, 2018. The Sun Devils will then travel to face the Spartans at Spartan Stadium in East Lansing on September 14, 2019.

“It is with great pleasure that we announce this series with Michigan State,” said Vice President for Arizona State University Athletics Ray Anderson. “We are committed to playing future football games against some of the nation’s finest non-conference opponents every year.  We believe our fan base will enjoy this series as well.”

“We continue to be aggressive in our approach to non-conference scheduling, as we seek to bring the top programs in college football to our state,” Michigan State Athletics Director Mark Hollis said. “The Arizona State series provides MSU Alums in the West and Southwest with an opportunity to see the Spartans compete against one of the Pac-12’s top football programs.”

Arizona State has now tentatively completed their non-conference schedule in 2018. The Sun Devils open the season vs. UTSA on Sept. 1 and travel to San Diego State on Sept. 15, one week later than originally announced.

Michigan State is the first announced non-conference opponent for ASU for the 2019 season.

The Spartans now have two non-conference games for both the 2018 and 2019 seasons. In 2018, MSU hosts Central Michigan, while in 2019 they host Western Michigan.

I’m a Michigan fan but you have to tip your cap to Michigan State’s scheduling over the next few years. If it weren’t for their “Celebrate the State” series against all 3 directional schools, their non-con schedules would be in consideration for some of the toughest year in and year out.

While not a marquee matchup, it’s a very solid one that’s everything I’d like to see in a non-conference Power 5 matchup: 1-1 and ON CAMPUS.

Michigan State bought it out

I’m an ASU fan..Michigan State is a powerhouse in football. Very glad to see ASU is continuing to pursue tougher opponents every year. It’s the only way were going to make it to the big game!

Good catch Lee. I was at the ’86 game and remember that exciting finish. Was standing in the student section and remember all of the drunken fans celebrating a wild Sun Devil victory.