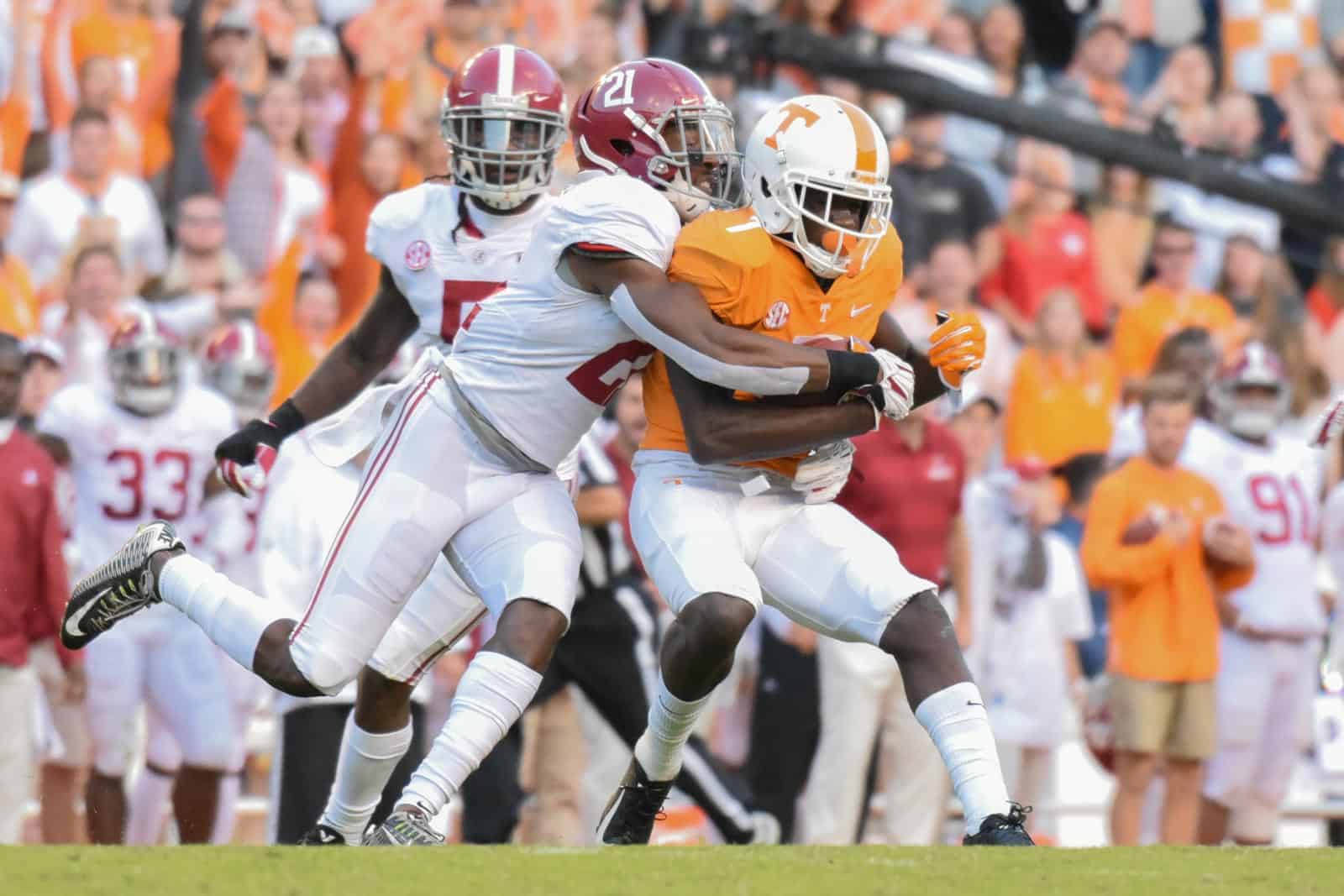 While most everyone will agree that Alabama playing Tennessee on an annual basis while LSU is paired with Florida is ridiculous, how unfair is it?

Yes – the Volunteers are 62-63 (.496) since 2009 while the Gators are 83-45 (.648) – but is there a different way to quantify the competitive disadvantage associated with the permanent cross-division rivalry scheme?

Think about it this way – in the last decade, only seven of the 14 members of the SEC have made it to the conference championship game.

Though certainly not fool-proof, these seven teams – four from the East and three from the West – are the “top tier” members of the SEC over the last decade.

Next, let’s look at how many times each of these upper-echelon programs played their elite counterparts from across the conference in the other division during the regular season. Where applicable, permanent cross-division rivals are listed in bold.

The results illustrate numerically how inherently unfair the permanent cross-division rival scheme is. While it’s impossible to assert that scheduling is the sole reason why Alabama has ascended to the SEC title game six of the past ten seasons, it’s equally impossible to say that it hasn’t helped the Tide get there.

It also explains why the SEC East has been more competitive – as in no one team has been the consistent frontrunner at least in part because the top two teams have equal scheduling burdens. Furthermore, it makes a strong case for advantageous cross-division scheduling being a major component of Missouri (which is paired with Arkansas from the West) winning the East division in 2013 and 2014.

To really drive home the point, look at the six seasons that Alabama won the West division and compare its regular-season opponents from the East vs. those of Auburn and LSU. Again, each team’s permanent cross-division rival is listed in bold.

Particularly of note are the 2012 and 2018 seasons, when LSU – which was a legitimate contender – played a pair of ranked teams while Alabama scored wins over unranked Missouri and Tennessee.

Also noteworthy is who Alabama didn’t play, a discussion that is every bit as important as who it did face. In other words, the Tide completely avoided Florida and Georgia in four of the six seasons it won the West.  Of the two exceptions – in 2014 and 2015 – only once were the Gators or Bulldogs ranked in the Top 25 when Alabama played them. That was in 2015, when Georgia was at No. 8 for its Oct. 3 visit from the Tide. The Bulldogs fell 38-10 in that game and then lost 38-31 to Tennessee the next Saturday, dropping out of the rankings for the remainder of the season.

In fact, where LSU has played eight ranked opponents in cross-division play since 2009, Alabama and Auburn have each played three. It amounts to LSU facing a ranked team in 40% of its total action vs. the East in the last decade compared to Alabama and Auburn playing Top 25 teams 15% of the time.

Furthermore, is it any coincidence that in two of the four seasons that the Crimson Tide didn’t manage to win the West that it also played a ranked Florida team that same season?

As far as contending that LSU, the team that has played the stiffest cross-division schedule since 2009, would have won a division title more than once had there been a true-rotating scheme from the East, that’s tricky because the Tigers have only beaten Alabama twice in the last ten years.

While in that specific instance it makes the point of title-grabbing moot, it does not change the rock-solid fact that cross-division scheduling in the SEC is grossly unfair.

The only true fix is to abandon permanent rivals and institute true rotating opponents from across the league. While there is no way to legislate total equality in a two-division format, this would ensure that no program has an inherent competitive advantage (by permanently being attached to a struggling program) or disadvantage (by annually playing a powerhouse program.)

Rivalries are GOOD and these things will even out. Is LSU getting taken in the woodshed? Sure but what is valued most by conference representatives? Known quantities or attempted parity?

She has been writing weekly articles for this site for years, she researches her articles well, I do not always agree, but what fun would that be.

Data is flawed when comparing LSU playing ranked opponents verses Bama and Auburn. Georgia might have been unranked once or twice during that entire span when playing Auburn and in most cases, the higher ranked of the two.

Inequities are gonna exist even without permanent crossovers. Some teams are always gonna have scheduling advantages over others regardless.

So while I agree these cross-over games can create some inherent unfairness for the SEC, yet probably not for the Alabama. That said,Tennessee must feel that they begin SEC play with one hand tied behind their backs, as they are try to win the East with a tsunami coming out of the West every October!

Steve Spurrier used to say the Divisional Rep should be the team with the best record with-in the division, while I am not recommending this, it is certainly one way to mitigate the cross-over imbalance!

This year in the B-10, Wisconsin plays Michigan State & Michigan @ home and Ohio State at the Shoe. Since MSU has beaten Penn State in 5 of the last 7 meetings, this is the hardest schedule a team in the B-10 West can face. The good news for the Badgers, it is a one time deal!.

The Georgia/Auburn game is not going anywhere (the deep south oldest rivalry) So … maybe it is time for some creative thinking Re: the SEC scheduling of cross-divisional play!

Playing 6 conference members 2x in 12 years does not constitute a conference.

I’m curious to what Auburn and LSU fans have to say about this topic. If they’re trying to make the playoffs, playing Tennessee has to be preferable to playing Florida or Georgia.

How about abandon the divisions altogether. Everyone plays 3 permanent opponents (based on history and/or geography). Then 5 opponents for a 2 year home & home. Then the other 5 for a 2 year h&h. Top 2 play in conference championship. There would still be some easier schedules than others, but balance is more likely.

The other half of the rivalry and the 14 team conference with an 8 game conference schedule is that most most SEC teams will play the non rival SEC other conference once every six years, every 12 years at home. That is less often then they play many Sun Belt teams.

I suggest either play a 9 conference game schedule in the SEC or get rid of the Rivalry game and play each team in the other conference every 3 or 4 years.

Florida vs LSu, Alabama vs Tennessee, Georgia vs Auburn, Mizzou vs Arkansas, and Vandy vs Ole Miss should be the only cross division games in set. Also the SEC should go to 9 conference games

There is no doubt in my mind that the cross-division scheduling setup in the SEC favors some but not others. However, keep this in mind: Georgia vs Auburn is the second oldest rivalry in the South (UNC vs UVa is #1), the oldest continuous SEC rivalry, and a very big rivalry game for both teams. Both teams want that game permanently. While Alabama-Tennessee doesn’t have the length of UGa vs Auburn, it is also a very old SEC rivalry that both teams really want, regardless of how competitive the games can be at times. Those two games are the main reasons for permanent cross-division games in the SEC.
As for Florida-LSU, I couldn’t really tell you. If both teams wanted it gone, I’m sure the SEC could work out something.

Nice reasearch! However, don’t abandon divisions just yet. There is indeed a way to keep division play, maintain the big rivalries, AND balance out the fairness of cross divisional opponents.