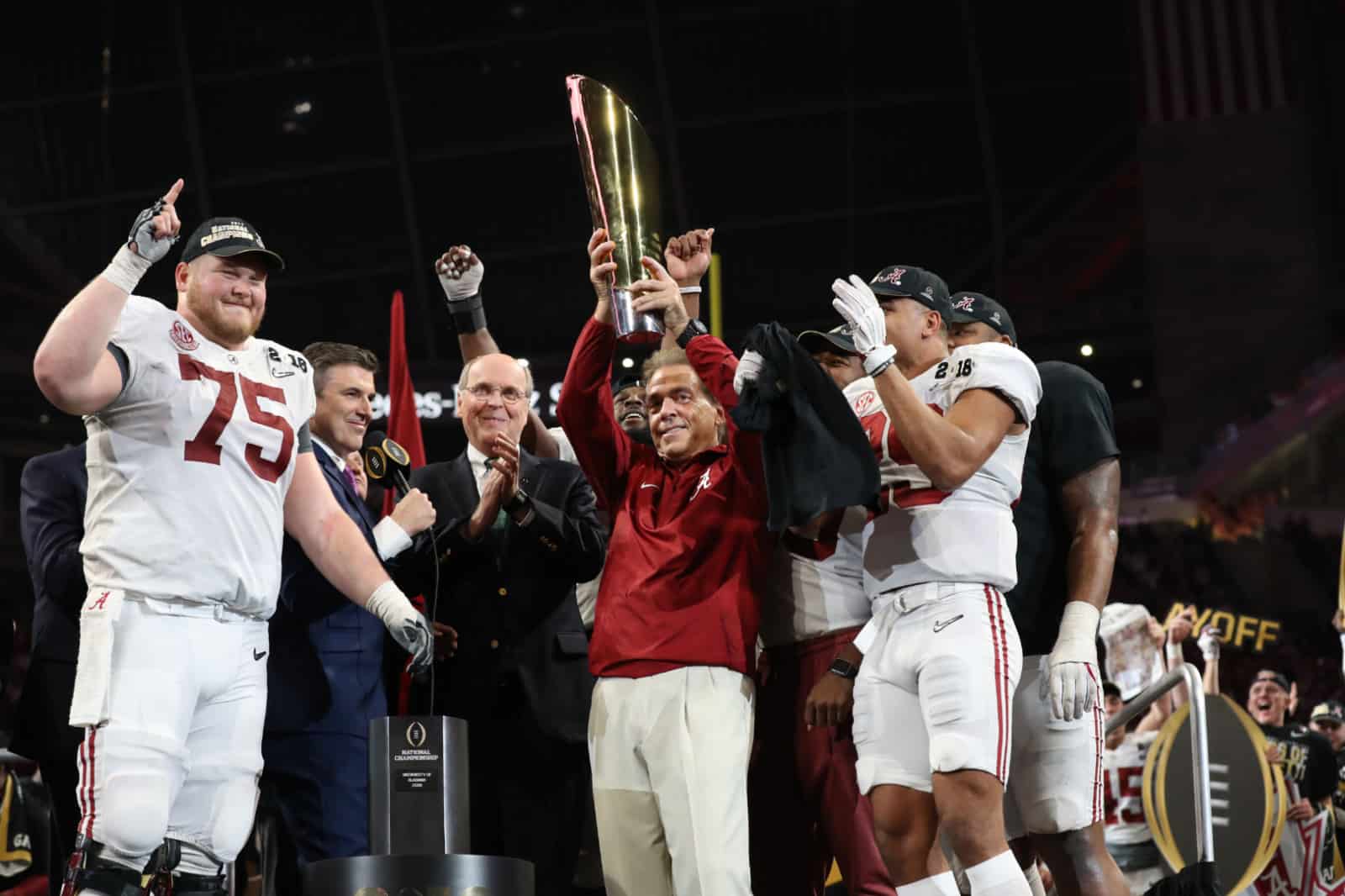 Alabama won its fifth national title since 2009 early Tuesday morning with some late heroics, taking down a 26-23, overtime victory over Georgia in Mercedes-Benz Stadium in Atlanta on a 41-yard touchdown pass from Tua Tagovailoa to DeVonta Smith.

Georgia (13-2) hit the scoreboard first just into the second quarter, with a 41-yard field goal from Rodrigo Blankenship capping a 14-play, 55-yard drive that spanned seven minutes and 40 seconds.  Another Blankenship field goal and a one-yard touchdown scamper from Mecole Hardman gave the Bulldogs a 13-0 halftime advantage.

Alabama (13-1) replaced Jalen Hurts at quarterback with Tagovailoa to start the second half, and that move paid immediate dividends.  A six-yard strike to Henry Ruggs brought the Tide back to within six.

“I just thought we had to throw the ball in the game, and I thought he (Tagovailoa) could do it better, and he did,” Saban told ESPN’s Tom Rinaldi.  “He did a good job.  He made some plays in the passing game.”

Hardman found the end zone for a second time on the ensuing possession, catching an 80-yard strike from Jake Fromm and just staying inbounds, extending the Georgia lead to 20-7.  A 43-yard field goal from Andy Pappanastos brought the margin to 20-10.

Another Pappanastos field goal, this time from 30 yards, chipped the Georgia lead to just a touchdown with 9:24 to play.

Following a three-and-out from Georgia, an eight-play, 66-yard drive by Alabama found pay dirt on a seven-yard toss from Tagovailoa to Calvin Ridley on fourth-and-four, tying the game at 20 with 3:49 remaining.

The Bulldogs again went three-and-out, setting the stage for what appeared to be the game-winning drive.  The Tide marched 48 yards on 10 plays, but Pappanastos’ 36-yard try hooked left as time expired in regulation.

Tagovailoa was himself sacked on the first play of Alabama’s possession, but threw the game-winning score to Smith down the left sideline on the next play.

The Alabama freshman quarterback finished 14-for-24 in relief, throwing for 166 yards and three touchdowns against just one interception.

“It was a team effort tonight.  It couldn’t have been done without our defense getting us the ball back, (and) our (offensive) line blocking, working their butts off, as well as our receivers,” Tagovailoa told ESPN’s Maria Taylor.  “It was just a great team effort.  They were the guys that made me look good tonight.”

The championship is Saban’s sixth, tying him with legendary Tide coach Bear Bryant at the top of the leaderboard in the modern era.

Alabama begins defense of its crown September 1st in Orlando, facing off with Louisville in a neutral-site affair.  Georgia’s 2018 campaign will begin that same day, with a home date against FCS opponent Austin Peay.

The real Champion is Central Florida

Wow! No luv for Bama at all, I understand year after year it gets harder to see this & the jealous just keeps getting stronger but one day it will pass but for now Bama proved once again who they are & the SEC is back on top.
Congrats to Georgia that suffocated Bama in the 1st half & I really did not see Bama winning at all that way they were playing. Outstanding job by Tua bringing the Tide together & making things happen. Defense also did a much better job in the end, now Bama just needs a FIELD GOAL KICKER! There is no reason for this crap at all! Bama has not had a good kicker in 7yrs & that could’ve been the out come last night but I preferred the alternate ending better.

I hope if you are not an SEC fan & watched the game that you were entertained, just to see Georgia beating Bama but the way Bama found a way to come back, miss a field goal, go into overtime & win with a 41 yard TD pass from a freshman that did a hell of a job reading the defense coverage.

Congrats to the Clemson & Oklahoma as well, great teams.

As for UCF being the real champion, I’ll make sure to head to Orlando & check out the plastic hardware they will have behind that invisible shield it is hidden behind.

Trust you, me. If this was a Clemson vs Oklahoma national championship the SEC haters would be out in full force, bashing the SEC, saying how they should’ve not been there, how down they are, how playing “cupcakes” show you can not beat the big boys, how because they don’t play a 9-game conference they are not strong enough…etc

People can just be mad or jealous or both, it is what it is! Roll Tide & Roll SEC!

Congrats to Alabama. I have been fairly outspoken in that I did not think Alabama was worthy of making the CFP and Alabama clearly proved me wrong. I have no problem admitting that. The eye test that I saw throughout the year looked a lot more like the first half of the game than the second half of the game. With a Jalen Hurts lead offense, I saw an Alabama team with a dominant defense (when healthy) and a lukewarm offense that was far from impressive. Inserting Tua Tagovailoa at QB completely changed their offense and made this team scary good. This is going to be an extremely difficult team for anyone to beat for the foreseeable future. Congrats again on winning 5 of the last 9 National Championships, clearly the most dominant team of the last decade.
Congratulations are also in order for Georgia. It has been nearly 10 years since the SEC East had a formidable National Title Contender. While they didn’t win the title, they proved they were a worthy contender. Great season for the Bulldogs.
Now lets just not go overboard in thinking that since the top 2 teams in college football this year were part of the SEC, that the rest of the conference is very good. Tennessee didn’t get any better by Alabama winning the title and neither did LSU. The conference still finished 10-12 vs other Power 5’s. That is far from “dominant.” Has Alabama dominated the college football landscape for the last decade, absolutely. The SEC as a whole over the last 5 years? Not so much.

first of all no hate btw they played a very dirty game against georgia and clemson and the reff didnt make the correct calls for georgia or clemson.
thx.

Auburn can only win at home.
Just sayin’.

I agree the officiating was not the best but please don’t blame or make excuses to why Bama won. As for dirty plays, I saw a couple from both teams but you don’t know what these kids are saying to each other down on the field, emotions run high. But of course blame the refs as most people do when their team does not win.

As a Georgia fan, I wouldn’t say the calls cost them the game, the certainly didn’t help… but that’s part of the game.

My thing, however, is we are seeing this kind of thing more and more and officials in championship games shouldn’t be missing things like the offsides call that wasn’t offsides. That has got to get fixed for the integrity of the game.

And again, it wasn’t just that game, you see it in a lot of games and even in other sports. It just seems to be more and more… I don’t know if the player have gotten so fast that it’s just harder to really see those things or what… But it has to get fixed.

As a fan, you just want your team to have a chance and Georgia had that. That game could have very easily been won by Georgia, so that’s really all you can ask for. Bama played great for a half and Georgia played good for a half… It could have went either way.