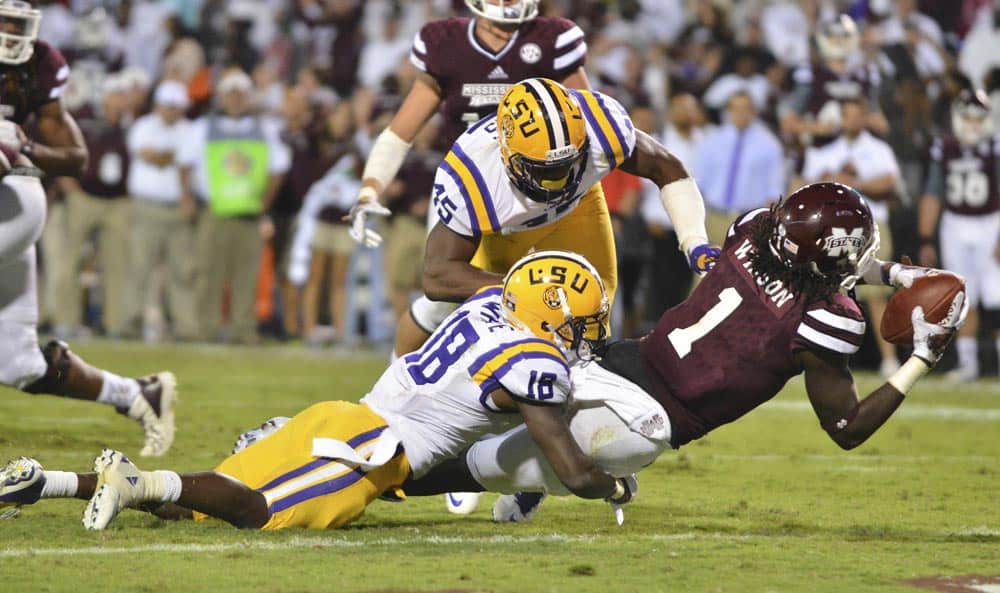 Week 3 of the 2016 college football schedule serves up a delicious 67 games with the top three teams in the land all squaring off with a ranked opponent on the road.

Games featuring FCS opponents drop all the way down to 12, or roughly 18% of the weekend’s action.

Both the Big 12 and Pac-12 kickoff conference play this weekend with TCU-Iowa State and USC-Stanford respectively.

Also worth noting are the whopping 11 first-ever FBS vs. FBS matchups, up from seven in Week 1 and only two last week. The only Power-Power game in that subset is Pitt-Oklahoma State, who in their combined 243-football years have never met previously.

Following is the rundown for Week 3. As always, the facts are unique to this week and are limited to FBS vs. FBS action.

No. 20 LSU and Mississippi State play for the 110th time this Saturday night in Baton Rouge. The series dates all the way back to 1896. The Tigers hold a 72-34-3 all-time advantage.

Georgia Tech and Vanderbilt first played 124-years ago in 1892. The Commodores won the game 20-10 in Atlanta. It was the same year that the first-official basketball game was played in Springfield, Massachusetts.

MOST-LIKELY WEEK 2 WINNERS BASED ON HISTORY (FBS vs. FBS only):

The Gators and Mean Green have only played once previously, 69-years ago in 1947. North Texas was classified as a “College Division – Small College” by the NCAA that year, but managed to upset the Gators 20-12 in Gainesville.

Florida finished the season 4-5-1, ranked 73rd historically among its 120 seasons of football. The Mean Green posted a 10-2 record, the only losses a 12-0 shutout at the hands of Arkansas and a 13-6 defeat to Nevada in the New Year’s Day Salad Bowl in Phoenix.

It was the first-ever bowl appearance by North Texas and one of only two double-digit finishes in program history.

Week 3’s road trip square off with No. 10 Louisville is a big exception to the rule for the No. 2 ‘Noles as its one of only three times it will leave state lines in 2016.

The only other non-Florida games on the books are a Week 10 trek to play NC State and a Week 12 date at Syracuse.

Georgia Tech hasn’t lost to Vanderbilt at home since 1935

Not only are the Yellow Jackets 11-0-1 vs. the Commodores since 1948, they haven’t suffered a loss in Atlanta since 1935. They’ve won eight-straight home games over Vandy since.

Back in 1935, Georgia Tech-Vandy was a conference game, both teams hailing from the SEC. The Yellow Jackets went 5-5 that year while the Commodores went 7-3 including back-to-back wins over Tennessee and Alabama to close out the season.

Houston hasn’t won at Cincinnati since 1971

The No. 6 Cougars have dropped six straight road games to the Bearcats. Overall, they’ve lost nine of the last 12 to Cincinnati, most recently posting back-to-back wins in 1972 and 1974.

Houston was an independent in 1971, posting a 9-3 record including a loss to No. 7 Colorado in the now-defunct Bluebonnet Bowl in Houston. They finished the season ranked No. 17 in the AP.

After falling to the Cougars, Cincinnati, also independent, roared back the next week, travelling to College Station, Texas and blanking the Aggies 17-0. The Bearcats finished 7-4 that year.

Louisville has only beaten Florida State once in 13 tries

Not only are the No. 10 Cardinals underdogs going into this Saturday’s showdown with the No. 2 Seminoles, they’ve only beaten them once in program history. That was 2002, when as an unranked commodity they zapped then No. 4 Florida State 26-20 at home in a shocker.

Prior to that, the Cardinals had dropped 10 straight to FSU. In four of losses they didn’t score a single point. The two teams have met twice since Louisville joined the ACC, Florida State hanging up 40-plus points on the Cardinals on both occasions.

No MAC team has an all-time winning record vs. its FBS opponent in Week 2

If history predicts future events, Week 3 will be a tough one for the MAC. Of the 10 members playing an FBS school this week, none are over .500 in the all-time series.

But, of course, this is the same conference that took down two Big 12 members in Week 2.

Week 2’s game, slated for Saturday night in South Bend, is the front end of a home-and-home series that wraps up next season. It’s also the only future date the two long-term rivals have booked.

New Mexico State’s road trip to Lexington to play Kentucky this Saturday afternoon represents its 20th time to try and knock off a current SEC member.

It’s a quest that the Aggies have yet to be successful at.

All 19 of the games were played on the road.

Penn State has NEVER lost to Temple at home

Temple’s win over Penn State last season was the first in 39 tries. Though that super-streak has been vanquished, one remains—a 0-24-1 all-time mark in Happy Valley.

More bad news for the boys over at the MAC, two of this week’s play dates have never fallen to one of its current members.