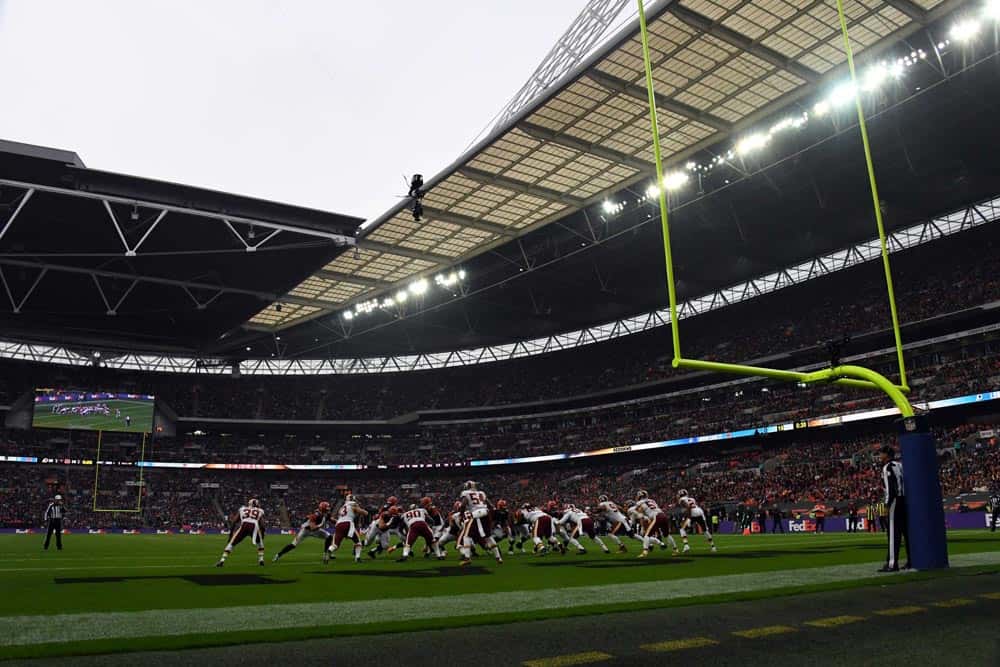 The 2017 NFL International Series has been announced by the league and it features four games in London at Wembley Stadium and Twickenham Stadium.

The Jacksonville Jaguars will host the Baltimore Ravens on Sunday, Sept. 24 (Week 3). The game will be played at Wembley Stadium.

On Sunday, Oct. 1 (Week 4), the Miami Dolphins will host the New Orleans Saints at Wembley Stadium.

The Cleveland Browns will host the Minnesota Vikings on Sunday, Oct. 22 (Week 7) or Sunday, Oct. 29 (Week 8) at Twickenham Stadium.

The fourth and final 2017 International Series game will be played on Sunday, Oct. 22 (Week 7) or Sunday, Oct. 29 (Week 8) at Twickenham Stadium. The Los Angeles Rams will play host to the Arizona Cardinals.

Jacksonville will be playing in their fifth consecutive game in London and have agreed to play there through 2020. The Jaguars’ opponent, Baltimore, will be making their first appearance.

Also making their first appearance in London are the Arizona Cardinals and the Cleveland Browns.

Miami will be playing in their fourth regular-season game in London and their opponent, New Orleans, will be making their second appearance.

Kickoff times and television coverage for the 2017 International Series “…will be finalized in conjunction with the revealing of the full 2017 NFL schedule next spring.​”

Assuming the games remain with a 9:30am ET kickoff time, I’d like the London games sold as a separate TV package starting next year.

ABC would be the ideal network to carry these games, as a way of easing back into being a regular NFL broadcaster.

Because in 2018, I’d like the remaining NFLN-exclusive TNF games begin to be simulcast on broadcast networks – adding 1 additional game each to CBS and NBC, and putting the remaining 6 games on ABC (those games co-produced by ESPN), with ABC’s games coming in the final weeks of the season when its regular Thursday night line-up is on hiatus for the remainder of the fall and early winter.

When the next TV contracts are signed, ABC then can get exclusive rights to the wild card playoff game it currently simulcasts with ESPN and add the Saturday divisional playoff game not on NBC. And then ABC would become the 4th network in the Super Bowl rotation, after CBS, Fox and NBC.

as an aside, 4 of the TNF package games would primarily air as Saturday doubleheaders, with the late afternoon games simulcast on CBS and NBC, and the nightcaps on ABC (some games may be moved to other days in some years to avoid conflicts with holidays or the Army-Navy game)

Saints and dolphins game when will definite date be available

I hope the saints the dolphins 45-8
First,Time saints are in London woo baby

Have you ever thought about adding a little bit more than just your articles? I mean, what you say is fundamental and all. However just imagine if you added some great photos or videos to give your posts more, &#p;;028op&#82212! Your content is excellent but with images and videos, this blog could definitely be one of the best in its niche. Good blog!