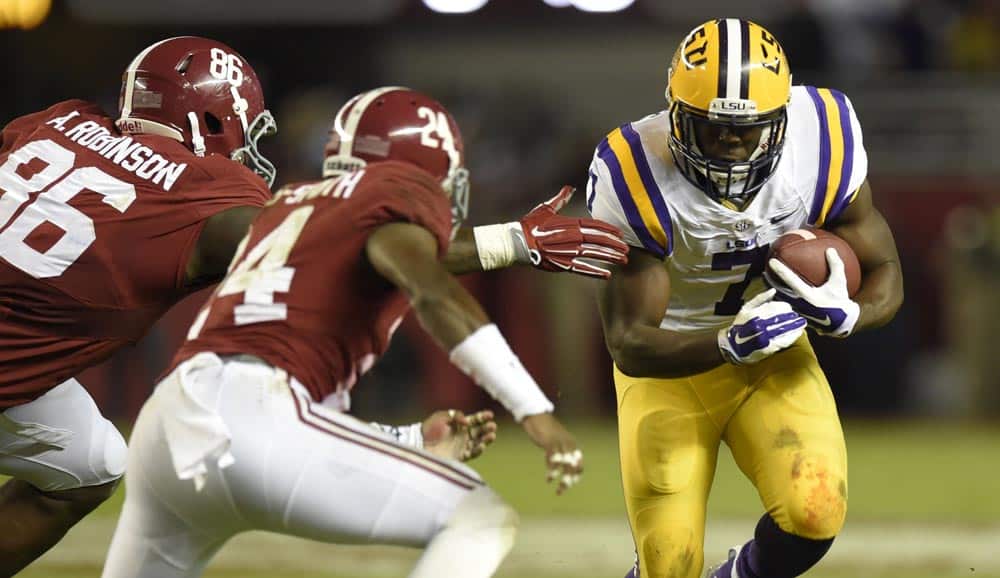 Welcome to the Week 10 edition of  SEC Football Predictions. Alabama and LSU play the annual marquee match-up of the year once again in prime time on CBS at 8:00pm Eastern. As an appendix to the following SEC Football Predictions, I have included this special breakdown of the Alabama-LSU game from Eric Taylor (me… not the legendary high school football coach portrayed on Friday Night Lights).

I hate to keep my friends waiting and I don’t like to keep y’all waiting either (Site owner and awesome guy Kevin Kelley allows me one joke per season and I wasted it on that one). Seriously, let’s stop wasting time. The Cubs won the World Series, so we can all expect to be dead in a few days, tops. The world is ending, but I will not allow our world to end before releasing the Week 10 edition of SEC Football Predictions.

Quick word of wisdom: Should Ole Miss be concerned with Georgia Southern? Of course not. Unless you ask Will Muschamp. Muschamp and his Gators lost this “gimme” game with the Eagles from the Sun Belt Conference around this same time of year in 2013. This loss wiped out any warm and fuzzies from the 2013 season and Muschamp’s tenure never recovered.

So, no pressure here for Hugh Freeze. It’s not like the Rebels are having an off year or anything. Long story short, Ole Miss needs to win this game and qualify for a bowl so the self-imposed bowl ban will have some teeth.
PREDICTION: Ole Miss 37, Georgia Southern 20

Big game word of wisdom: Mississippi State is just two years removed from being the No. 1 ranked team in the country with one of the best quarterbacks in the nation. Based on Dak Prescott’s success in Dallas as a rookie, the story makes a little more sense using revisionist history.

Texas A&M has premiered as the No. 4 team in the first release of the College Football Playoff rankings. Whether the Aggies remain in the Top Four as the season progresses remains to be seen, but winning games on the road against teams they are expected to beat is one sure prerequisite. Washington’s success in the Pac-12 will determine as much of A&M’s future as anything at this point… so long as they win Saturday in Starkville.
PREDICTION: Texas A&M 45, Mississippi State 14

Quick word of wisdom: I’m a believer in Pro Football Focus and, like everyone in America, I’m a believer in Auburn. Fair warning to Alabama fans — you may feel a small tinge of stress watching how this offensive line can create havoc for even great defenses.

Auburn has turned a somewhat average season into a potentially storybook one since beating LSU in September. The Tigers are ranked 10th nationally in total offense and 31st in total defense, but it’s the 8th ranked scoring defense that should scare teams remaining on Auburn’s schedule.

Not only can Auburn’s ground game (3rd nationally) gash your defense for chunks of yards every play, the defense can punish your offense to the point of submission as well. That is a combination that will lead to the opposition giving the game up in the fourth quarter. Ole Miss was in the lead or within one score the entire game last Saturday night in Oxford, but Auburn squeezed the life out of the Rebels slowly and surely like a boa constrictor to earn a double-digit victory once the clock read 00:00 on the scoreboard.

Not to mention that Auburn has arguably the best kicker in football. Pro Football Focus places Daniel Carlson on their list of top kickers and they tell you how and why he’s so good.

Vanderbilt has a good defense and I’ll mention it once again that Derek Mason is the head coach of the Commodores because of his success as Stanford’s defensive coordinator in back-to-back wins over unstoppable Oregon. I don’t think Vanderbilt will win, but they will slow down Auburn… a little. The Commodores will fade away as the afternoon sun fades behind the West stands of Jordan-Hare Stadium as Auburn prepares to make a huge run toward Atlanta and possibly the CFP with games against Georgia and Alabama remaining on the schedule.
PREDICTION: Auburn 34, Vanderbilt 13

Biggish game word of wisdom: This game will be as frustrating for Tennessee fans as it will be for Arkansas fans. Arkansas will appear as though they are much closer to victory than they actually are in this game because Florida’s offense is so painstakingly average when compared to the Gator’s defense.

The Hogs will find themselves on the right side of the 50 yard line more than once Saturday, but Florida’s defense will make a stop on 4th-and-inches, block a field goal, and force a turnover to keep Arkansas from every tying the game or taking the lead. This will last all the way up until there is about six minutes remaining in the game when Florida’s defense scores a garbage touchdown on a deflated Arkansas defense after the Hogs turn it over deep in their own territory.

The turnover will come with the Hogs trailing by only four-to-seven points, but driving the entire field on this Florida defense seems impossible and it is.
PREDICTION: Florida 26, Arkansas 13

Quick word of wisdom: This game is grabbing zero interest in any town in America not not named Columbia. Will Muschamp has found a quarterback and after a big win over Tennessee last week, the Gamecocks appear to have a little momentum that could lead them to a bowl game. That momentum will carry Muschamp into his favorite season of head coaching, the second season. His 2012 Gators were a fumble away from playing Alabama for a chance to blow out Notre Dame in the Orange Bowl for the BCS National Championship. A win Saturday will allow the momentum fuel to burn a little hotter.
PREDICTION: South Carolina 52, Missouri 20

Quick word of wisdom: The “This Used To Be A Pay-Per-View Game” game of the week will be held in Neyland Stadium. The Vols are coming off a terrible week where they lost to South Carolina on Saturday and said goodbye to Jalen Hurd on Monday as he decided to transfer.

This could be the very example of addition by subtraction that Tennessee so needed. They’ve experienced multiple moments of subtraction by subtraction with injuries all season, but removing what appears to have been a cancerous tumor from the locker room could prove to be what the Vols need to finish the season with four wins and a chance to win the East. The Vols will need to invest in Arkansas, South Carolina, and LSU team apparel and cheer like mad that two of those three teams can defeat Florida, but the winner of the East will more than likely have three losses. Why not Tennessee?
PREDICTION: Tennessee 45, Tennessee Tech 7

Quick word of wisdom: A Kentucky win and an Arkansas win over Florida will turn next week’s game with Tennessee into a potential SEC East Championship Game (contingent on Florida-LSU outcome).

I will pick this game based on nothing but the most recent status of each team. Georgia will win nine times out of ten years, but this Week 10 Bulldogs team of 2016 is not ready to win this game. They would have won three or four weeks ago, but not this week. Kentucky is hot at the right time and coaching and confidence will be the difference this week.
PREDICTION: Kentucky 33, Georgia 24

Big game prime-time word of wisdom: So much can be said about this game, but so little really needs to be said. The two factors that determine if Alabama will lose are simple.

I could be wrong (and I have proven in 2016 that I am one of the greatest at being wrong), but Alabama should and will win this game Saturday night.
PREDICTION: Alabama 34, LSU 17

I will take Kentucky over Georgia as well. I got Bama winning 27-17 over LSU but I think Arkansas will bounce back after their hiatus & beat Florida at home.