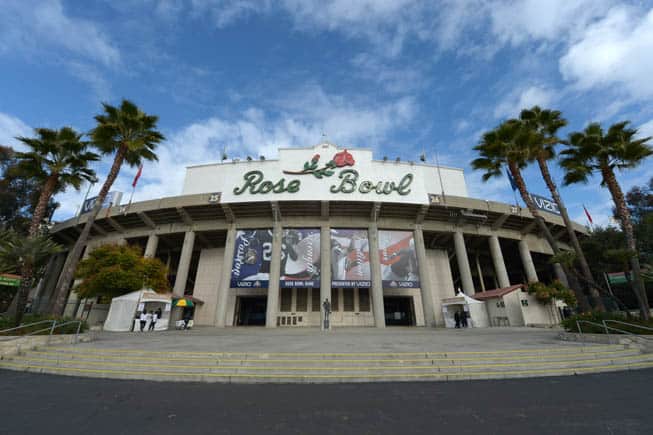 The 2013-14 College Football Bowl Schedule was officially released today by the Football Bowl Association. The FBA represents college football’s 35 postseason games and all the excitement that is the bowl season.

The bowl season kicks off on Saturday, Dec. 21 at 2 p.m. ET with the Gildan New Mexico Bowl in Albuquerque. This years match-up will feature the Pac-12 no. 7 seed against the no. 4 or 5 team from the Mountain West.

The Vizio BCS National Championship Game concludes the college football season on Monday, Jan. 6, 2014 at 8:30 p.m. ET. The game, which features BCS no. 1 vs. BCS no. 2, will be played at the Rose Bowl in Pasadena, California.

Four bowls have altered their names for the 2013-14 season. The MAACO Bowl Las Vegas will now be called the Las Vegas Bowl, while the Meineke Car Car Bowl of Texas is now the Texas Bowl.

Listed below are links the to the complete 2013-14 Bowl Schedule and a printable version:

Michigan finally goes to Rose Bowl and it has to be on the 6th of January!

The Rose Bowl is still on Jan 1st bud

Rose Bowl is actually Wed Jan 1st but the national championship is also at the Rose Bowl on Jan 6th.

Michigan will be in neither game.

Why does the Big 10 and the SEC get so many New Years day bowls and the Pac12 and the Mountain West are jammed togehter the weekend before Christmas when nobody is watching or cares?

Because the B1G and SEC have the largest and most rabid fan bases. Take Tennessee for example. Which western teams have the type of following that Tennessee does? maybe USC and Oregon, but thats about it.

Yet in the context of the SEC, Tennessee is basically a mediocre team. They are light years behind FLA, GA, BAMA, LSU, TAMU and arguably behind Auburn, S,. Carolina and Ole Miss in the conference pecking order.

Agree with Bill.
Out West you only have a select group of teams that have large and rabid fan bases and get the attention of the National Media. Teams like USC, Oregon, BYU, Washington, Boise State, ASU, Stanford and UCLA.
Outside of that there are your Arizonas, Air Force, SDSU, Cal, etc and then that next group Fresno St, Utah, Colorado, Wyoming, etc.

this will change drastically after this upcoming season. the bowl line up’s will be different.

I’ve been saying this for months that we need more bowl diversity among the power 5 conferences. we need 10 bowl games (outside the 6 semifinal big name bowl games) that match up each power 5 conference with each other. if we could get more SEC-PAC, B10-B12, ACC-B10, ACC-B12 matchups and a little less PAC-B12 B10-SEC and ACC-SEC matchups that would be great. just to know as a team that you could play your bowl game against anyone in any conference is awesome. this NEEDS to happen.

it would only require 10 games and if the conferences could get together and man up, we could make this happens.

10 games right there!!!! as a football fan I am hoping this happens!

I like Travis B’s lineup. As a Bama fan, I realize it was a 28 point game. But I still like having a high profile Independent team as a bowl tie in. Either a Notre Dame, a BYU or whoever the top ranked Indy team is to see how they would hold up against top level SEC Talent.

I’m sure the question on everyone’s mind is, “Who will Pittsburgh play in the BBVA Compass bowl”.

the cotton and orange will be on the same day at the same time? what a way to end the bcs, cause the cotton bowl will probably have higher ratings.

They haven’t officially announced the time for the Orange Bowl yet. But yeah, they will likely go head-to-head.

What Bowl will ASU Be in