10 Future Non-Conference Match-Ups to Get Excited About 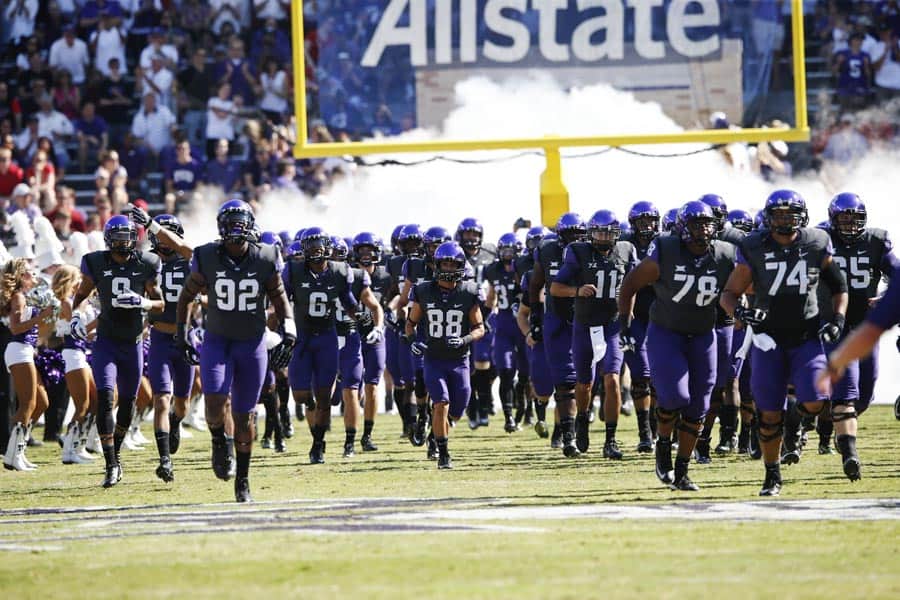 With blockbuster clashes featuring Oklahoma–Ohio State and Alabama–USC slated for this season, college football’s schedulers are a long way from done working their magic.

Here’s a look at ten future match-ups worth putting on your calendar.

Army and Oklahoma have only played on three occasions, most recently in 1961 when the Sooners edged the Black Knights 14-8 in the Bronx. Their first meeting, and Army’s only win, came on Sept. 28 1946, a game the Knights won 21-7 at West Point. Oklahoma finished that season 8-3, ranked No. 14 in the final AP poll while Army went 9-0-1 and captured the last of its five national titles.

TCU and Ohio State haven’t squared off since 1973 when the Buckeyes triumphed 37-3 in their Horseshoe. Ohio State owns the all-time series advantage 4-1-1, the Horned Frogs’ only win coming via an 18-14 decision in 1957. The two have never met outside of Columbus, Ohio.

When: Aug. 31
Where: Arlington, Texas

A rematch of the 2011 BCS Championship game in Glendale, Ariz. when Auburn edged Oregon 22-19. This was also the only time the Tigers and Ducks have ever met on a football field.

In what’s a bold scheduling move for both programs, Boise State and Florida State have never met on the gridiron. This series is a glimpse into what the CFB Playoff would look like with eight teams.

The first regular-season meeting since 1954, Texas and LSU most recently played in the 1963 and 2003 Cotton Bowls. The Longhorns hold the all-time advantage 8-6-1 and have won six of the last eight.

When: Sept. 5
Where: Houston, Texas

These two up-and-comers have only met once previously, in 1975 when Baylor traveled to Oxford and knocked off the Rebels 20-10 in the season opener. The Bears went on to a 3-6-2 record that year while Ole Miss went 6-5.

Michigan State and Miami first met in 1945 and have played only four times. The most recent clash came in 1989, a 26-20 Miami win in East Lansing. The Spartans have never beaten the Hurricanes in football.

Two legitimate CFB Playoff contenders with fiery coaches, UCLA and Michigan haven’t squared off since 2000 when the Wolverines traveled to L.A. and got zapped 23-20. Michigan holds the all-time series lead 8-3 which includes two bowl match-ups; the 1983 Rose (UCLA won 24-14) and the 1981 Bluebonnet (Michigan won 33-14).

Not sure how Army vs Oklahoma got in here, all the others are spot on.

Yeah that one is a cupcake game for OK

It is definitely a unique matchup, but not exciting at all.

The NU v OU series is not based on detestation. It’s one of mutual respect and shared tradition.

How is UGA-Notre Dame not on this list but Army-Oklahoma is? Can’t wait to go to South Bend my senior year.

Having Army-OU up there is like having UGA-Yale up there if they played because the last time those two faced off, it was historical/both teams didn’t suck, despite it being many years ago in a whole different era of football.

Uhhh…..no Georgia vs Notre Dame, but Army vs Oklahoma makes the list? That is comical.

Even WVU – Tennessee in 2018 is more interesting than OU – Army.

How about the Arkansas-Michigan home-and-home in 2018-2019?
Bielema returns to Big Ten country early in Sept. 2018. Looking forward to my first trip to the Big House! Whooooo-Pig—-Sooooie!

If Bielema can last that long.

How about eastern Michigan vs army in the boob bowl

Michigan has nonconference series with oklahoma, texas, viriginia tech, arkansas and washington as well as a season opener in 2017 against Florida in JerryWorld at Arlington. Going to be so much fun watching Michigan football